Charging Cell Phones on the Sly in Syria, the True Story

Earlier this month, we aired a report from our partners at GlobalPost about protesters in Syria — the mistreatment they endured and their tactics for getting around a restrictive regime. One method of recharging cell phone batteries described by one of the interviewees caught the eye of some bloggers as being too good to be true. Turns out, it was.

In it, one of the revolutionaries, Omar Maqdad, describes in English how protesters would use a glass of water to recharge their cell phone batteries:

>”We got a problem with the batteries because our batteries are running out, and no electric to recharge your equipment. So, for phone calls, we create a new way. It’s actually simple way to recharge your phone. We used to — a glass of water with two batteries Duracell or something else. This already exists everywhere. We use it, keep the batteries in the water for one hour or 30 minutes. Then you put the USB adapters inside the water and start charge. That’s how we charge the mobiles.”

His MacGyver-style methods made somewhat of a splash. The Atlantic cited it in this blog post and Gizmodo actually tested the charging technique.

Brent Rose of Gizmodo alerted us to the results in a comment on our transcript:

“I saw this piece the other day and I found it fascinating, but the science behind the cell phone charging didn’t seem right to me, so I tested it and did a piece on it for Gizmodo. I thought you might be interested in my findings: http://gizmodo.com/5830329/are… Would love to hear your thoughts on it.”

We showed the Gizmodo blog post to the producers of the piece, and here’s Macleod’s response:

“Omar emailed me back over the weekend and I spoke to him and yes, there has been a misunderstanding over this battery charging description for which I can only apologize. The glass used for charging was actually a mug and it didn’t contain water. Water wasn’t used to charge the phone at all. All they did was put a battery powered portable charger inside a mug which they carried to protests. 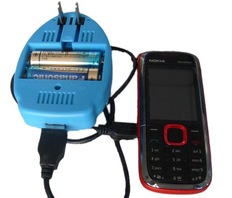 “Electricity had been cut in Daraa for the best part of a week. Omar explained that the batteries on their Blackberries and other phones would often run out during protests so they needed a way to recharge on-the-go. However, they couldn’t carry any bags with them as that would draw the suspicion of the security forces, who would always search anyone carrying a bag. And the charger was too large to fit comfortably in a pocket. So, as he tells it, they chose large mugs to carry their portable charger in. When they needed to charge on the street they would simply sit down and hook their phone up to the charger inside the empty mug, so it would look like they were having coffee. The reference to AA batteries was meant only to refer to the portable charger which is powered by those batteries.

“Omar was very upset and apologetic to know there were some question marks over his explanation. He said that though he wanted to give the interview in English he sometimes struggled with vocabulary to explain things in a concise manner. It seems he struggled for the word mug, and instead of ‘glass of water’ meant ‘glass for water.’

“So it seems Gizmodo is right and, again, I’m sorry for this misunderstanding. I did ask Omar after the interview about the ‘glass of water’ thing but we did not get to the understanding that the glass was not full of water at all. And given that we have back up mains power in our Beirut flat which is essentially a large battery covered in water I thought Omar’s glass trick made sense.

“As I said, Omar was really troubled by this and I have absolutely no reason to doubt it was anything but a mistake with language. I don’t believe these young activists have any incentive to elaborate on the tough conditions they face, knowing as I do from three years living in Syria just how ruthless the security forces there are.”