The Obama administration issued sanctions against Syrian President Bashar al-Assad Wednesday in response to the continued violent crackdown on anti-government protesters in the country.

The sanctions freeze any assets that Assad and the six government officials named in the executive order have in U.S. jurisdiction, and ban Americans from doing business with them. 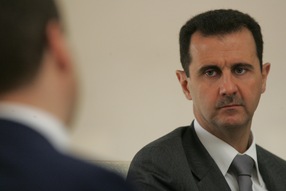 Andrew Tabler, Next Generation fellow in the Program on Arab Politics at the Washington Institute for Near East Policy, called the move unprecedented. “Now sanctions concerning Syria’s internal matters and domestic behavior almost outweigh those dealing with regional matters,” he said.

The new sanctions will put pressure on the Assad regime. “Whether they move or not is another question. But Assad is in a real dilemma here,” Tabler said.

President Obama issued a previous executive order on April 29 that imposed sanctions on Syria, but on other Assad relatives and Syrian officials, not Assad himself.

In the latest executive order, President Obama cited the need for the sanctions on the “continuing escalation of violence against the people of Syria including through attacks on protestors, arrests and harassment of protestors and political activists, and repression of democratic change, overseen and executed by numerous elements of the Syrian government.”

U.S. officials said actions by Assad, once viewed as a reformer, made them decide they could no longer exempt him from the type of sanctions already applied to Libyan leader Moammar Gadhafi, the Associated Press reported.

Read: An analysis of how the timing of Syria’s revolution is working against its supporters