The Dark Side of Egypt’s Tahrir Square 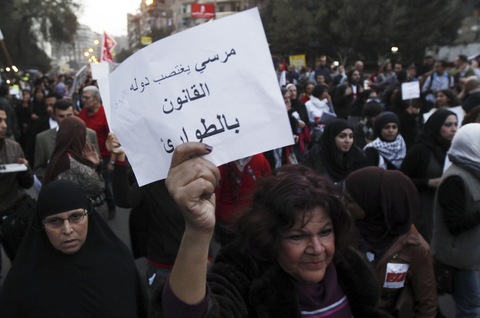 Protesters marched Feb. 6 against the government, saying it hasn’t done enough to protect women from violence in Tahrir Square and Mohamed Mahmoud Street in Cairo. Photo by Amr Abdallah Dalsh/Reuters.

Tahrir Square in Cairo, the site known around the world for Egypt’s historic revolution, has another much more dubious reputation — as a dangerous place for women.

Many learned of this distinction when news broke about the mob sexual assault on CBS News correspondent Lara Logan in February 2011. Although the spotlight on the issue has gone away somewhat, activists say it’s still very much a problem.

The formula for the attacks on female protesters in the square, they say, has become familiar and vicious: Men will surround a woman, separating her from her companions, grope her, sometimes ripping off her clothes, and sexually assault her.

In the ensuing chaos, the attackers sometimes will turn on the people trying to help her, or pretend they’re helping the woman when they’re actually continuing to sexually violate her.

The mob violence against women has become such a problem at large-scale protests in Tahrir Square that — in the absence of protection from the Egyptian authorities — grassroots groups have organized to raise awareness and protect women in the crowd.

One such group is Operation Anti-Sexual Harassment/Assault, which formed in November. One of its members, Engy Ghozlan, who also co-founded HarassMap, told us by phone that during a large protest in Tahrir on Jan. 25, at least 19 gang attacks were reported nearly simultaneously in the square.

“The violence used is becoming more and more vicious,” she said, and the similar techniques make people think it’s an organized method of intimidation — though they don’t know by whom. “In Egypt, we’ve been living with sexual harassment for so long, we can tell what is just sexual harassment and what is intended to tell you ‘you’re not welcome here’.”

During the previous regime of Hosni Mubarak, who resigned in 2011, female protesters who were arrested reported being stripped and forced to have virginity tests while in custody, said Ghozlan. The current ruling Muslim Brotherhood has denied being behind the more recent attacks, but it isn’t doing much about the problem either, she said.

The Egyptian Embassy in Washington, D.C., did not respond to the PBS NewsHour’s requests for comment on this story. 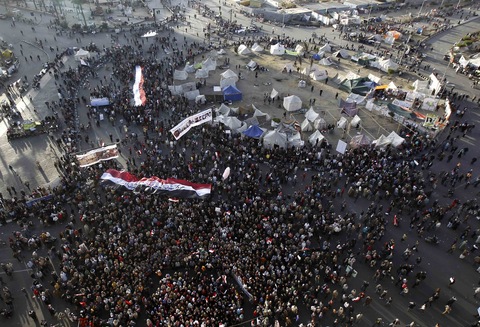 A view of Tahrir Square. Tahrir means “liberation” and is considered the heart of the uprising against Egyptian President Hosni Mubarak. Photo by Mohamed Abd El Ghany/Reuters.

Some of the women who were assaulted declined to be interviewed, but in written accounts they described people’s hands reaching under their clothes to touch their breasts, genitals and buttocks, and being beaten with sticks and knives.

When an attack is occurring, and people are trying to pull the woman to safety, sometimes nearby shopkeepers close their doors because they don’t want to admit the unruly crowd, some volunteers say. So Operation Anti-Sexual Harassment/Assault has established safe houses around the square, where the assaulted women can get clothes, medical care and information about legal assistance.

During protests, the group positions volunteers wearing identifying T-shirts around the square to be on the lookout for the mob attacks and to intervene when they occur.

The group also has posted telephone numbers on its Facebook page for people to call when they need help or to report an assault.

Egypt’s Human Rights Committee of the Shura Council (Upper House) met Feb. 11 about the mob violence against women, where some politicians reportedly said women could protect themselves by avoiding the square.

But the attacks appear to be having the opposite effect. Those who were assaulted often continue to protest in Tahrir, and some have joined the anti-harassment organization, Ghozlan said. “Our message is women are not scared and will continue to go there, and [this method of intimidation] isn’t working.”