Although a year has passed since Japan’s tsunami sucked tons of wood, nets and other debris into the Pacific Ocean, the National Oceanic and Atmospheric Administration continues to track the rubble and urges others to do so to help focus cleanup efforts.

The total amount of debris is unknown — the Japanese government is fine-tuning its estimate of the amount that was generated and sank initially, said Ruth Yender, NOAA’s Japan tsunami marine debris coordinator. And immediately after the event, satellite imagery showed large swaths of floating junk, which dispersed a few months later.

So NOAA is using other means, including higher resolution satellite imagery and the public’s participation, to collect information for planning and cleanup purposes.

NOAA developed a model (above) and a map (below) to track where debris likely will circulate in the Pacific Ocean. It launched a marine debris tracker app, which people can use to log rubble they find along coastlines and in waterways. They also can email the agency with their finds. 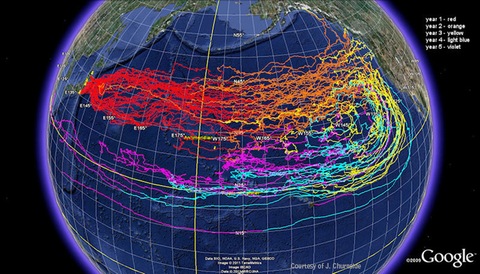 Click on map for a larger version. Courtesy of J. Churnside/NOAA’s Office of Oceanic and Atmospheric Research.

It doesn’t matter if the trash is from the tsunami or other sources. “Debris is not a new thing. It washes ashore everyday, and it can be a hazard to marine life,” Yender said. Whales, sea lions and other creatures can ingest it or become entangled, and it also can do damage to coral reefs and boat propellers, she said.

So by gauging any changes in volume and composition, NOAA and other state, local and federal agencies can know where to ramp up their cleanup efforts.

Since nuclear reactors, including those at the Fukushima Dai-ichi plant, were damaged in the earthquake, there was a concern of radioactive contamination. But agencies such as the Environmental Protection Agency and Federal Emergency Management Agency have examined tests of nearby damaged vessels and other tsunami remnants, and determined it was “very highly unlikely” the spreading debris would be radioactive, Yender said.