Two poems on what it’s like to live with Ebola, climate change

The two women live in different parts of the world: one on a tropical island in the Pacific, another in a former war-torn African country now fighting Ebola.

Their lives are very different but they chose the same way to express their anguish and hopes for their situation: through poetry.

Kathy Jetnil-Kijiner, 26, was born in Majuro, capital of the Marshall Islands. The low-lying island chains in the Pacific Ocean are about halfway between Hawaii and Australia.

The population, numbering about 71,000, is contending with the effects of climate change, including rising sea levels and more severe droughts and flooding.

When Jetnil-Kijiner was asked to present a poem at the opening of the U.N. Climate Summit in September, she thought about the toll climate change was taking. She thought of her baby daughter and all that she had to lose if the sea swallowed up her homeland.

“We shouldn’t have to leave. We should be able to stay where we were born and where our ancestors all have been,” she said in New York after delivering her poem to the U.N. representatives.

She feels strongly that it isn’t too late to save the islands.

you are a seven month old sunrise of gummy smiles
you are bald as an egg and bald as the buddha
you are thunder thighs and lightning shrieks
so excited for bananas, hugs and
our morning walks past the lagoon

i want to tell you about that lagoon
that lucid, sleepy lagoon lounging against the sunrise

some men say that one day

that lagoon will devour you

they say you, your daughter
and your granddaughter, too
will wander rootless
with only a passport to call home

no one
will come and devour you

no one’s drowning, baby
no one’s moving
no one’s losing
their homeland
no one’s gonna become
a climate change refugee

or should I say
no one else

and even though there are those
hidden behind platinum titles
who like to pretend
that we don’t exist
that the marshall islands
tuvalu
kiribati
maldives
and typhoon haiyan in the philippines
and floods of pakistan, algeria, and colombia
and all the hurricanes, earthquakes, and tidalwaves
didn’t exist

still
there are those
who see us

hands reaching out
fists raising up
banners unfurling
megaphones booming
and we are
canoes blocking coal ships
we are
the radiance of solar villages
we are
the rich clean soil of the farmer’s past
we are
petitions blooming from teenage fingertips
we are
families biking, recycling, reusing,
engineers dreaming, designing, building,
artists painting, dancing, writing
we are spreading the word

you are eyes heavy
with drowsy weight
so just close those eyes, baby
and sleep in peace

because we won’t let you down 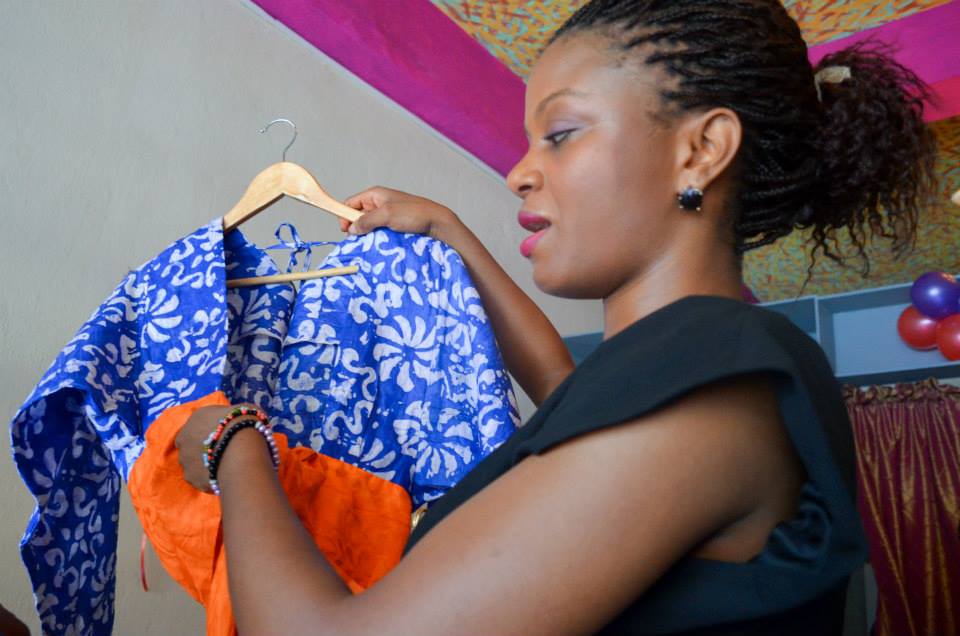 Patrice Juah hangs a dress in her store, Moie, in Monrovia, Liberia. Photo courtesy of Juah

Patrice Juah, who describes herself as in her late 20s, is a small business owner in Monrovia, Liberia.

Just as her country was recovering from back-to-back civil wars from the late 1980s to early 2000s, an Ebola outbreak this year sent it into a tailspin. The World Health Organization has confirmed 7,470 cases of Ebola in West Africa, with more than half in Liberia. More than 2,000 people have died in Liberia alone.

“I was really young since the war. That’s all we knew,” she said recently by telephone. During the war, “you could determine the enemy from which side they were coming. But now with Ebola, it’s a silent enemy. You don’t when it’s going to strike. You don’t know who’s next or who already has it. Everybody is a suspect, even your children, your friends.”

Juah’s business, like others in Monrovia, has taken a nosedive. The lack of customers has given her more time to work on her poetry, she said. “I use poetry to write about the pain in the street.”

On the Ebola ride,

paranoia is the driver.

It takes you on a high

leaving your senses hanging in the wild.

Fear is its deputy,

and panic, the conductor.

You never know which way the bus will go,

but you are told that as long as you stay put, constantly wash your hands,

and limit human contact; you’re in a “safe” place, at least for a while.

You do your best, to secure your seat,

making sure your loved ones are safely on board,

but as the death news come in, you’re reminded that this isn’t a normal ride.

You get a sudden kick, a silent voice asking why you’re still here;

perhaps on a mission, or for a purpose, you think.

Then suddenly humility takes over, the only calm you’ll feel in a while,

as you give thanks for still being alive.

And this is all happening on the Ebola ride.

Still on the road, Pickups rush by with men dressed like aliens,

either carrying or going to pick up fallen victims.

And somewhere at a Containment Unit, a baby cries in horror,

as his mother takes her last breath.

As you peek through the window,

crowded streets create the illusion of a normal life,

but as alive as everything appears from the outside, fear is killing us slowly on the inside.

Sometimes we wonder who’ll get off next.

But that’s the Ebola ride: no traffic lights, no horns,

no road signs, just us against an unseen enemy.

The night brings relative calm, but we rarely sleep,

as the nightmare of what’s to come the day ahead, haunts our dreams.

If you’re a diehard patriot, you remain on the ride for the love of country.

If you’re poor, the ride is your only choice.

If your survivor is your priority, you’re left with more choices then one:

to flee for dear life, with hope of returning when normal days are back?

Well, in the midst of this chaos, no one can tell.

And on the other side, the ocean wind sets the flames in the Crematorium ablaze,

as our hearts leap, for the souls of the ones we loved so dearly.

No last goodbyes, only memories, anguish, pain and grief.

The road is too narrow, the ride long and bumpy.

When will we arrive? No one really knows.

We’re stuck on this ride, with tiny doses of hope.

And though help arrives, we’re still in doubt,

as they too are clueless about when the ride will end.

on this hand washing, temperature taking,

The reporting from New York was supported in part by the U.N. Foundation’s press fellowship program.

Left: Kathy Jetnil-Kijiner from the Marshall Islands was selected from among 500 candidates to read her poem "Dear Matefele Peinam" at the United Nations climate summit in New York on Sept. 23. She said she got the stingray tattoo behind her ear in honor of her homeland and rediscovering her roots. Photo by Larisa Epatko/PBS NewsHour