Obama vows to assist those who stand up to ‘violent extremism’

President Barack Obama told the nation and the world on Tuesday that his country “reserves the right to act unilaterally” to pursue and thwart terrorists. He called upon Congress to authorize the use of force against the Islamic State group.

The same day as his State of the Union speech, Islamic State militants threatened to kill two Japanese hostages if they weren’t paid a ransom.

Japan recently had joined the effort to try to root out the extremists from Syria and Iraq by offering nonmilitary support. The United States and its allies launched a campaign of targeted airstrikes against the Islamic State group in August.

In his remarks, President Obama underscored the importance of “assisting people everywhere who stand up to the bankrupt ideology of violent extremism.”

“This effort will take time,” Mr. Obama said. “It will require focus. But we will succeed. And tonight, I call on this Congress to show the world that we are united in this mission by passing a resolution to authorize the use of force against ISIL (Islamic State of Iraq and the Levant).”

Back in September, President Obama laid out a strategy to “degrade and ultimately destroy” the Islamic State group, including deploying more troops to Iraq to help security forces there.

The air campaign has continued nearly every day since then. 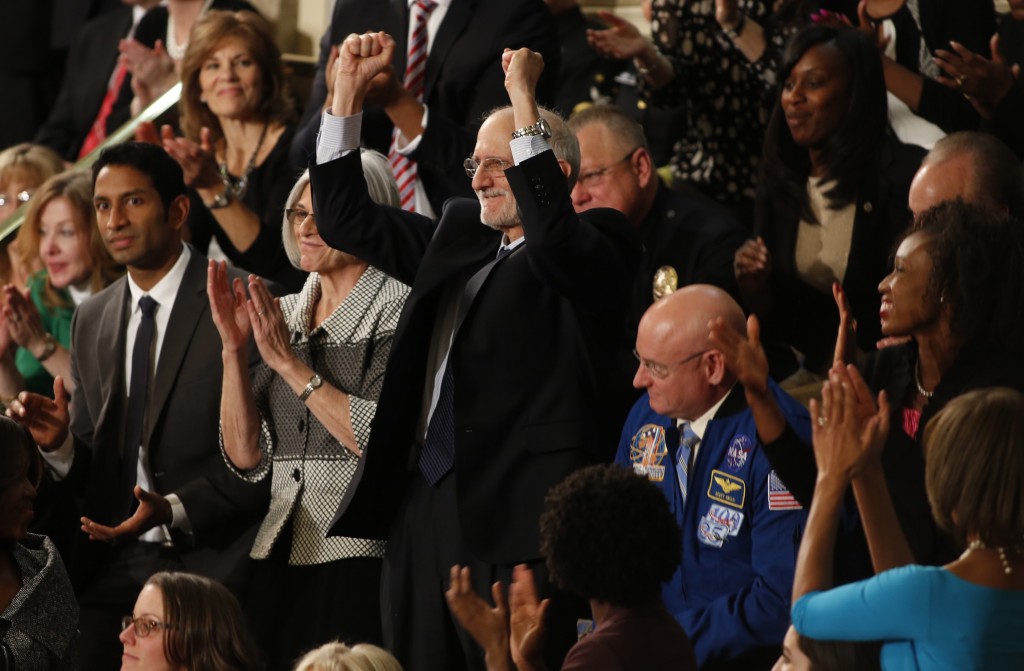 Alan Gross, recently released from prison in Cuba, thrusts his fists in the air as he is mentioned by President Barack Obama during his State of the Union address Tuesday night. Photo by Larry Downing/Reuters

President Obama on Tuesday also spoke about the U.S. shift in policy on Cuba.

“In Cuba, we are ending a policy that was long past its expiration date,” he said. “When what you’re doing doesn’t work for 50 years, it’s time to try something new.”

Watch the president’s full Dec. 17 address on Cuba and a breakdown of the policy changes.

That initial announcement on the diplomatic thaw drew mixed responses.

“The president’s taken an extraordinarily dangerous bet,” said Roger Noriega, former U.S. assistant secretary of state, on the Dec. 17 PBS NewsHour. “He has made unilateral concessions to the Castro dictatorship, a dictatorship that’s drawing its last breaths. And by normalizing political relationships, diplomatic relationships, he confers a legitimacy on that regime that it doesn’t deserve.”

“People are trying to create this false premise that somehow this does a favor to the Castro brothers,” said Rep. Chris Van Hollen, D-Md., on the same NewsHour. “It doesn’t do any favors. I think, over time, you’re going to find the Cuban regime is the one that is put most at risk by this greater exchange of ideas and goods.”

However, in his State of the Union speech, President Obama quoted Pope Francis, who has supported improved relations with Cuba, saying, “Diplomacy is the work of ‘small steps.’ These small steps have added up to new hope for the future in Cuba.”

“No foreign nation, no hacker, should be able to shut down our networks, steal our trade secrets, or invade the privacy of American families, especially our kids,” he said.