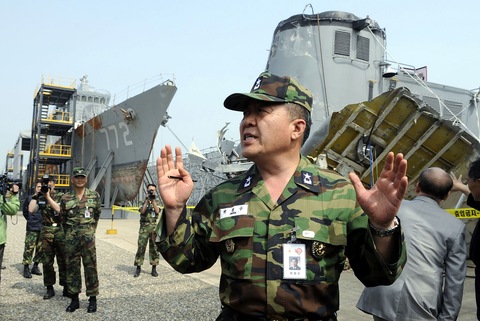 South Korea on Thursday released the results of a multinational investigation that point to North Korea’s use of a torpedo in sinking one of its navy vessels in March. The United States and other nations condemned the North over the incident.

South Korea’s navy ship, the Cheonan, sank in the disputed maritime border with the North in the Yellow Sea on March 26 after a mysterious explosion split it in half, leaving 46 sailors either dead or missing.

An investigation conducted by South Korea, Australia, Britain, Sweden and the United States said it was a North Korean homing torpedo that sank the ship, based on remnants of a torpedo propeller and steering parts that matched a North Korean design found in the wreckage.

The United States “strongly condemns the act of aggression” that led to the sailors’ deaths, according to a statement issued by the White House. “This act of aggression is one more instance of North Korea’s unacceptable behavior and defiance of international law.”

North Korea said the investigation was based on fabricated evidence and that it “will promptly react to any ‘punishment’ and ‘retaliation’ and to any ‘sanctions’ infringing upon our state interests with various forms of tough measures including an all-out war,” according to a statement released by its National Defense Commission and posted by the Korean Central News Agency.

“The people of this region share the hope that this incident can be appropriately handled to protect the stability of the Korean Peninsula. This suits the interests of each country’s people,” he said, reported Reuters.

Joel Wit, a visiting fellow at the U.S.-Korea Institute at Johns Hopkins’ School of Advanced International Studies, said this incident should prompt a retooling of the way the United States deals with North Korea.

“The strategy we’ve had, which is in large part called ‘strategic patience,’ isn’t going to work,” he said. “This is a time for people to sit down and give this some really serious thought and stop coming up with the same old tired answers.”

“This is the sinking of a ship, 46 sailors, potentially could have been 100. This is a very serious incident,” said Victor Cha, director of Asian studies at Georgetown University. He said the response should be strong enough to deter North Korea from doing a similar act, but not one that starts a war.

Tensions between North and South Korea have been brewing for years, and the sinking of the Cheonan could be the latest manifestation of their troubled relationship, the analysts said.

“North and South Korea for the past few years have had a lot of problems in their relationship, and the North Koreans do not like the current South Korean government and president,” Wit said. “And so to the extent that they thought they could humiliate him, they decided to go down that road.”

The Associated Press has footage of the Cheonan retrieval operation: