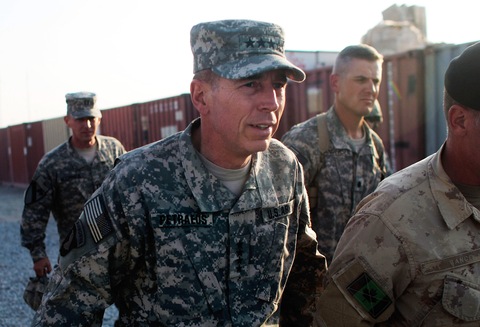 Army Gen. David Petraeus, currently head of U.S. Central Command, has been called on to lead coalition forces in Afghanistan in place of Gen. Stanley McChrystal. Over the years, Petraeus has overseen troop surges and security efforts in Iraq, Afghanistan and Pakistan.

From Jan. 26, 2007 to Sept. 16, 2008, Petraeus worked to carry out the surge in U.S. forces in Iraq as commanding general of the Multi-National Force – Iraq, succeeding Gen. George Casey.

In April 2007, Petraeus spoke to Jim Lehrer about how operations were faring in Iraq, the increase in sectarian violence and hopeful signs of Sunni Arabs fighting against al-Qaida in Anbar province:

>”Frankly, it’s a stunning development and reflects the frustration that the Sunni Arab tribes in Anbar have had with al-Qaida and what al-Qaida has done to them, to their sheiks, their families, their young men and, frankly, to their businesses and livelihoods. It has really had a devastating effect. And they have said, ‘No more,’ and stood up and voted with themselves and with their young men.”

Lehrer also asked him what he thought about the comments on both sides of the Iraq debate that “if General Petraeus can’t pull this off, nobody can.”

“Well, as I mentioned at the outset, Jim, again, I’m conscious of a couple of things. One is that the Washington clock is moving more rapidly than the Baghdad clock, so we’re obviously trying to speed up the Baghdad clock a bit and to produce some progress on the ground that can perhaps give hope to those in the coalition countries, in Washington, and perhaps put a little more time on the Washington clock.

“I’m keenly aware, again, that we’ve got a pretty heavy rucksack of responsibility out here, got a lot of help in carrying that rucksack. We’re doing the very best we can with what we have, and, really, that’s about all that we can do, Jim.”

Petraeus again appeared on the NewsHour on Sept. 12, 2007, with U.S. Ambassador Ryan Crocker to discuss the latest Iraq assessment ahead of a primetime speech by President George W. Bush.

“The main effort, the one that gets the two ends on the arrow, if you will, is the political line of operation. We all recognize that, that is the deciding piece in this effort, enabled, enormously, obviously, by the security effort, which has to make that political progress possible,” Petraeus said.

“I can tell you that the feeling in Baghdad on a day when there has been a horrific suicide car bombing is not one that is conducive to people sitting down and hammering out the details of legislation. So that line of operation has to enable the political one.

“But at the end of the day, this is going to be solved by politics, we hope. That’s how we want the ethno-sectarian competition for power and resources to be sorted out.”

In April 2008, Petraeus was nominated to head U.S. Central Command, overseeing operations in Iraq and Afghanistan. In September of that year, he handed over the reins in Iraq to Gen. Ray Odierno.

Petraeus has made several appearances on Capitol Hill as commander of U.S. Central Command, including testifying before Congress in April 2009 about the Obama administration’s new Afghanistan-Pakistan strategy.

More recently, he briefed senators about the progress in the Afghan war and appeared at one point to faint, but later returned to finish his testimony.

Petraeus will appear again before the Senate Armed Services Committee on Tuesday for his confirmation hearing as commander of U.S. forces and the International Security Assistance Force in Afghanistan.

Tune in to the NewsHour on Thursday for worldwide reaction to Petraeus’ nomination and what lies ahead.