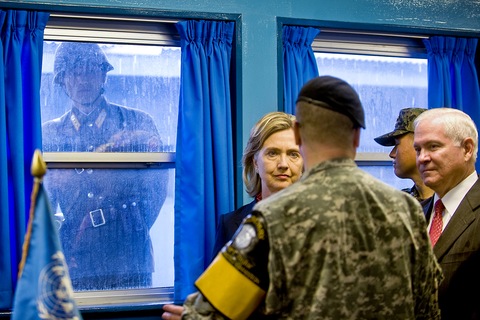 A North Korean soldier looks through the window during Secretary Clinton and Secretary Gates’ visit to the Demilitarized Zone. Photo by Cherie Cullen/DOD via Getty Images

Clinton and Gates’ tour of the DMZ and visit to Seoul for meetings with their South Korean counterparts — the countries’ first “two-plus-two” security talks — coincides with the 60th anniversary of the Korean War.

Gates said it was his third visit to the 160-mile long DMZ. “Looking out across the DMZ, it is stunning how little has changed up there and yet how much South Korea continues to grow and prosper,” he said. “The North, by contrast, stagnates in isolation and deprivation. And as we saw with the sinking of the Cheonan, it continues its history of unpredictable and, at times, provocative behavior.”

In March, an explosion ripped the South Korean navy vessel the Cheonan in half, killing 46 sailors. A multinational investigation later determined the cause was a North Korean torpedo, which the North has denied.

During this week’s visit, Gates announced joint military exercises with South Korea in the Yellow Sea, where the sinking of the Cheonan took place, and Sea of Japan to the east. He said the drills would involve about 10 U.S. ships and eight from South Korea, and include anti-submarine warfare operations.

According to Victor Cha, senior adviser and Korea chairman at the Center for Strategic and International Studies, the stepped up military demonstrations have put the Chinese on edge.

“The Chinese really don’t like it because even though the exercise hunts North Korean subs, obviously the Chinese also have lots of subs in the region,” he said. “They will involve an aircraft carrier as well, so this is a major military exercise which I am certain the Chinese see as potentially threatening to them.”

On the trip, Clinton also announced a new set of sanctions against North Korea aimed at curbing its nuclear activities by targeting the sale or purchase of arms and luxury items, freezing assets and working with banks to halt illegal financial transactions, she said.

In general, the two-plus-two meetings represent an upgrading of the U.S.-South Korean alliance, said Cha. Previously, the United States held them with Japan and Australia in Asia — i.e., the closest allies, he said.

On Wednesday’s NewsHour, military historians discuss the anniversary of the Korean War and where things stand in the region.