U.S., Russia to Cut Nuclear Arsenal by a Third 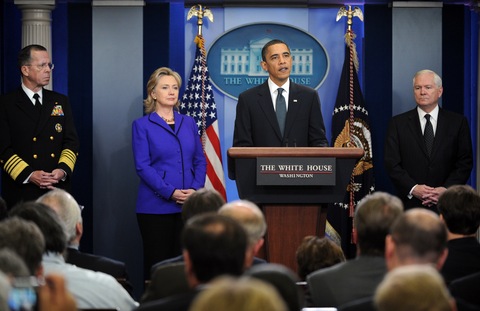 President Barack Obama announced Friday that after a year of “intense negotiations” with Russia, he and Russian President Dmitry Medvedev have agreed to reduce nuclear weapon stockpiles by a third.

The two presidents plan to sign the new Strategic Arms Reduction Treaty — the old one expired in December — on April 8 in Prague. The following week, President Obama hosts a 40-nation summit in Washington on how to keep nuclear materials from falling into the hands of terrorists.

“By upholding our own commitments under the Nuclear Non-Proliferation Treaty, we strengthen our global efforts to stop the spread of these weapons, and to ensure that other nations meet their own responsibilities,” said Mr. Obama with Secretary of State Hillary Clinton, Defense Secretary Robert Gates and Chairman of the Joint Chiefs of Staff Adm. Mike Mullen at his side.

The Senate must still ratify the START treaty.

Mr. Obama added that when the United States and Russia work together, it improves “security and prosperity of the wider world. We’ve so far already worked together on Afghanistan. We’ve coordinated our economic efforts through the G20. We are working together to pressure Iran to meet its international obligations.” Read his full statement.

The Kremlin hailed the deal, which also re-establishes a verification process, as a sign of cooperation between the two nations:

“The presidents agreed that the new treaty marks a higher level of cooperation between Russia and the United States in the development of new strategic relations,” a Kremlin statement said, reported the New York Times.

View a report from Moscow on the announcement by RT, an English-language Russian news channel: