In Venezuela, Will ‘Chavismo’ Last Without Hugo Chavez? 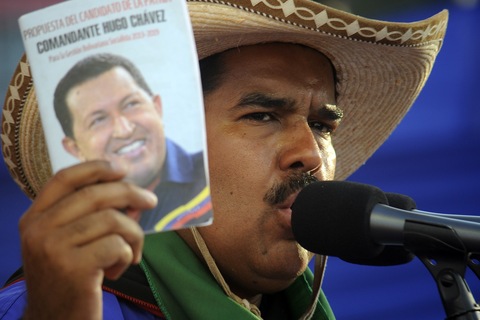 The late Venezuelan President Hugo Chavez was the force behind “Chavismo,” a left-wing political ideology that favors nationalization and social welfare programs over free market development. But will that ideology survive in its most robust form without the charismatic leader?

Chavez’s hand-picked successor, Nicolas Maduro, who is expected to win Sunday’s special election for president, represents Chavez’s United Socialist Party of Venezuela and hopes to carry on its socialist ways.

However, opposition candidate Henrique Capriles, who lost to Chavez in last year’s presidential election before Chavez succumbed to cancer, has criticized Maduro and other government officials for merely paying lip-service to socialism while they drive around in fancy cars and take exclusive vacations. “They are skin-deep socialists only. Their behavior, I’d say, is savage capitalism,” Reuters recently quoted him as saying.

In light of the upcoming election in Venezuela, we asked some Latin America analysts about the future of Chavismo.

Whatever the results of Sunday’s elections, Chavismo will not disappear any time soon. Though it lacks a solid, coherent structure, the movement created and inspired by Hugo Chavez tapped into a sensibility among many Venezuelans that is bound to continue in some form. Absent Chavez, chavismo may be diminished, and will manifest itself in different ways, under a variety of political figures.

Still, the clamor for greater social justice and empowerment, and a quest for identity and pride particularly among the nation’s poor, will be sustained in some way. It is hard to overstate Chavez’s influence and impact on a significant part of the population, as was reflected by the outpouring of grief right after his death. Since Chavez’s revolutionary project is far from complete, it is reasonable to assume that the power of his message will continue to resonate and will have to be taken seriously by whoever is in charge of Venezuela.

There is little question that the movement Chavez left behind — a peculiar amalgam containing strands of socialism, nationalism, and militarism — will be a force to be reckoned with for some time. Looking ahead, the challenge for Chavez’s heirs will be to hold it all together without Chavez’s charisma, money and remarkable political astuteness.

The death of Hugo Chavez leaves a gaping hole in Venezuelan politics. During his 14 years as president, Chavez dominated virtually every aspect of political life. Through lavish social spending financed by the high price of oil (Venezuela has the largest proven oil reserves in the world), and through the sheer force of his charismatic personality, Chavez assembled a loyal base of supporters among those who received not only concrete material and political benefits but also something more ephemeral — dignity. At the same time, and abetted by the fragmentation and, at times, abstentionism of the opposition, Chavez buttressed his dominance through the gutting of institutions such as the judiciary that provide checks and balances against unfettered executive power. He ensured the loyalty of the armed forces through successive purges and likewise stacked the state oil company, PdVSA, with loyalists following a failed strike in 2002.

Chavez’s designated successor, Nicolas Maduro, will face significant challenges in keeping together the disparate elements of the Chavez coalition, especially at a time of mounting economic difficulties and increases in Venezuela’s already astronomical levels of crime and violence. His campaign has been based exclusively on the invocation of Chavez’s legacy and spirit, but he will need to develop his own connection to the Chavista base in order to maintain its active loyalty. As a civilian, Maduro will have a harder time consolidating his legitimacy with the military than his chief political rival, National Assembly president and former officer Diosdado Cabello. Finally, without further investment to boost oil production, the distortions of Venezuela’s petro-export economy will only deepen. Chavismo will continue, and most likely radicalize, in the face of such challenges.

Informed by media reports in the United States, it may be difficult for those outside of Venezuela to understand the extent to which the political and social landscape has shifted during the past 14 years in which Hugo Chavez served as president. It is precisely these changes that ensure that Chavismo will survive without Chavez.

Despite the image of Chavez that is typically portrayed in the media, hundreds of thousands of people waited countless hours to see his body lying in state at the Military Academy in Caracas. Those mourners were real people, expressing real pain at the loss of a president they had supported. They were not people who flocked to pay respects because they received “free gifts” as is often suggested by the opposition. Their presence at the memorial highlights the extent to which new social actors — especially women, Afro-Venezuelans, urban social movements, youth, and others — see themselves as active stakeholders in the political process and whatever future course it takes.

After more than a decade of claiming that Chavez was an aberration who had used his charisma to “captivate” the poor, the opposition is now scrambling to alter its message. Like the Republicans in the United States, the conservative opposition in Venezuela is trying to adapt to new political landscape. Their presidential campaign committee has adopted the name the Simon Bolivar Command (after the Venezuelan independence leader revered by Chavez). Their candidate now calls himself a progressive and promises to increase wages by 40 percent while continuing and expanding the social missions, the Chavez initiated programs responsible for dramatically reducing poverty and improving the quality of life.

Chavismo will survive precisely because it built upon a rich tradition of social movements that empowered millions and addressed their plight. When the opposition candidate purports to be a version of “Chavez lite”, it shows the way Chavismo has transformed the political landscape.

Vice President Maduro inherited Chavez’s mantle and he understands the philosophy of Chavismo. With plentiful resources, Maduro could continue the intrinsic relationship. But without those resources — current economic problems will decrease disposable state expenditures — Maduro will have to borrow money. Who will bankroll him?

The Chinese National Petroleum Corporation (CNPC) seeks to maintain the flow of Venezuelan crude and the stability of the Venezuelan government. Would the CNPC be willing to renegotiate its loans to ensure that both continued oil production and political stability continue? Probably. However, CNPC may impose limitations on Maduro’s use of that “borrowed money”. Maduro will have to accept a degree of austerity and further Chinese management and manpower in the Chinese housing, agriculture and energy projects. The nature of this “new reality” may be difficult for the Venezuelans to accept.

We should, therefore, expect Maduro to face growing domestic restlessness as he fails to deliver the promises of Chavismo. Maduro will seek to shift the blame onto others, including the United States. I anticipate deteriorating relations with Washington and raucous calls for the Bolivarian Alliance, known by its Spanish acronym ALBA, to intensify its anti-Yankee rhetoric. U.S. companies may find increasing restrictions on their activities, if not court cases such as the Chevron case in Ecuador. In the end, without sufficient resources ALBA will wither and Maduro will be a one-term president.

Browse all of our World coverage.