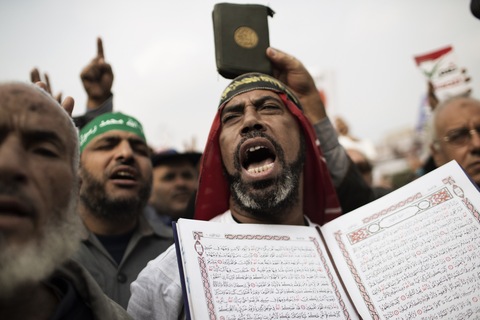 A supporter of Egypt’s President Mohammed Morsi and the Muslim Brotherhood holds a Quran, Islam’s holy book, at a demonstration in Cairo on Friday. Photo by Marco Longari/AFP/Getty Images.

Rallies for and against Egyptian President Mohammed Morsi got violent in Alexandria Friday on the eve of a referendum on a constitution drafted mainly by his Muslim Brotherhood party.

The voting was split into two rounds — this Saturday and Dec. 22 — to ensure enough judges would be available to supervise polling sites after many decided to go on strike.

We asked the team of Nathan Brown, professor of political science and international affairs at George Washington University, and Mokhtar Awad, junior fellow at the Carnegie Endowment for International Peace, about the discontent in Egypt. They answered the following questions in a joint email:

What is it about the constitution that the opposition doesn’t like?

Their original complaints were about the process — that it was written by an assembly that was dominated by Islamists. They have other procedural complaints as well — the speed of the drafting and the short time between the drafting and the referendum. They are beginning to develop criticism of the content as well-they say the draft is too presidential, offers weak protections for basic rights, and enshrines conservative religious principles in law. These criticisms have some foundation, though some are exaggerated.

Why did they decide to urge a “no” vote rather than a boycott?

This was a big topic of debate. They have been pressured by some to come up with a positive agenda rather than just a negative one; they may also be drawing back from seeming to want to delegitimate the entire system. They hope that a narrow win will but enough pressure on Morsi domestically and internationally that it will stop emerging authoritarian tendencies. They also may hope to get practice for parliamentary elections that follow in two months should the constitution be approved. 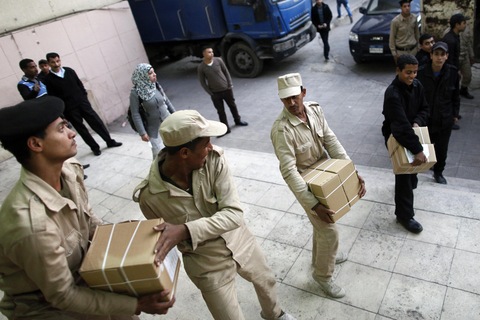 Egyptian soldiers in Cairo carry boxes with official papers in preparation for the referendum. Photo by Mahmoud Khaled/AFP/Getty Images.

In general, why has each step been problematic in Egypt?

We’ll have more on the referendum on Friday’s NewsHour. View all of our World coverage and follow us on Twitter: