Pope Francis met with inmates and lawmakers, celebrated Mass in three different cities, and addressed world leaders during his first visit to the United States, and the first by any pope since 2008. Watch videos of all the events below.

Pope Francis met Wednesday morning with President Barack Obama at the White House, where he applauded the president’s proposal for reducing air pollution. “Climate change is a problem which can no longer be left to our future generation,” the pope said.

“Climate change is a problem which can no longer be left to our future generation.” – Pope Francis
He also cheered “the efforts which were recently made to mend broken relationships and to open new doors to cooperation within our human family represent positive steps along the path of reconciliation, justice and freedom.”

Following the meeting, the pope took a lap around the Ellipse in the popemobile. “Our backyard is not typically this crowded,” joked President Obama. 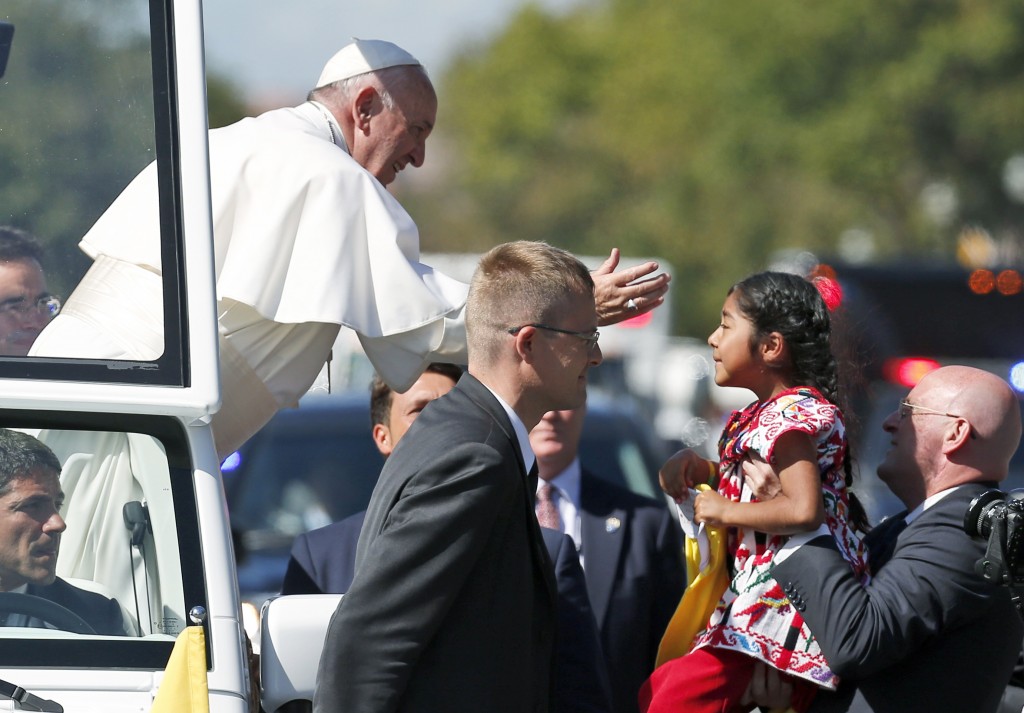 Pope Francis reaches for a child during a parade in Washington, D.C., on Sept. 23. Photo by Alex Brandon/Pool via Reuters

Pope Francis celebrated Mass on Wednesday at the Basilica of the National Shrine of the Immaculate Conception in Washington, D.C., where he canonized Junipero Serra, a Spanish-born priest who started nine missions in California in the 1700s. You can watch it below:

Pope Francis addressed a joint meeting of Congress, the first for any pope, on Thursday and spoke in support of the poor, elderly and young. He said in light of today’s violent conflicts, including those committed in the name of God and religion, “our response must instead be one of hope and healing, of peace and justice.”

“Our response must instead be one of hope and healing, of peace and justice.” – Pope Francis
He spoke up for immigrants and for treating refugees with compassion. He urged lawmakers to help the poor while protecting nature. And the pope, who will be visiting the Festival of Families in Philadelphia in a few days, encouraged general support of families, particularly the young and most vulnerable.

In his address to the United Nations on Friday, Pope Francis spoke of the need for government leaders “to ensure that all can have the minimum spiritual and material means needed to live in dignity and to create and support a family, which is the primary cell of any social development.”

Read his full speech as translated by the Vatican.

He participated in an interfaith ceremony at the 9/11 memorial:

And visited the Our Lady Queen of the Angels School to meet with children and families of immigrants in the Harlem neighborhood of New York: 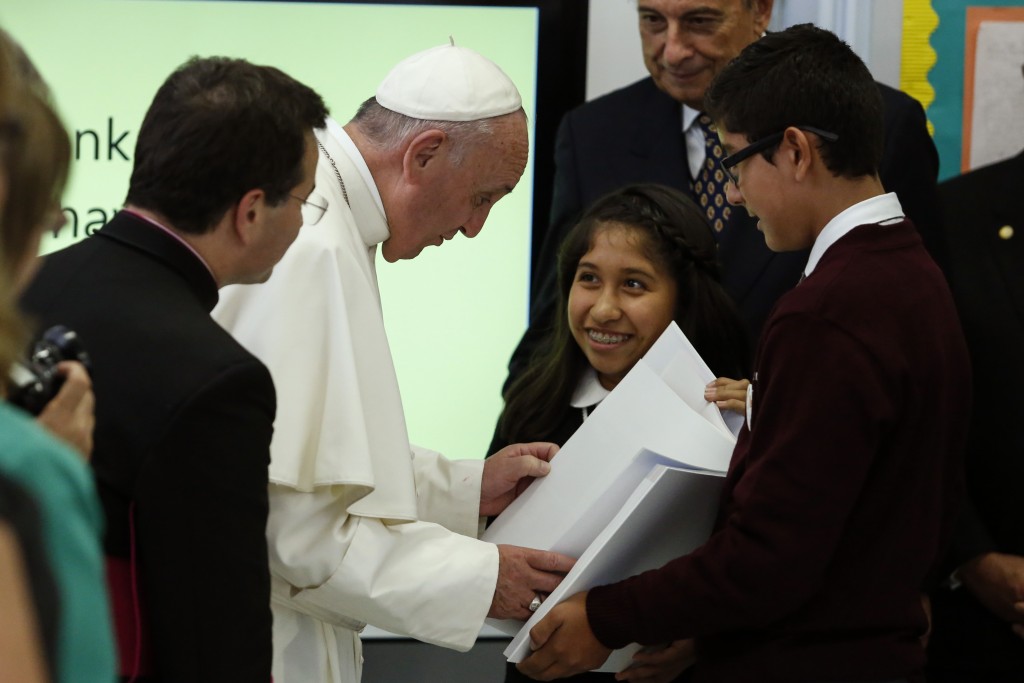 Pope Francis receives a book from Shaila Cuellar (center) and Victor Franco (right) while visiting a classroom in Our Lady Queen of Angels School in East Harlem in New York on Sept. 25. Photo by Kena Betancur/AFP/Pool via Reuters

The pope finished the day be celebrating Mass at Madison Square Garden: 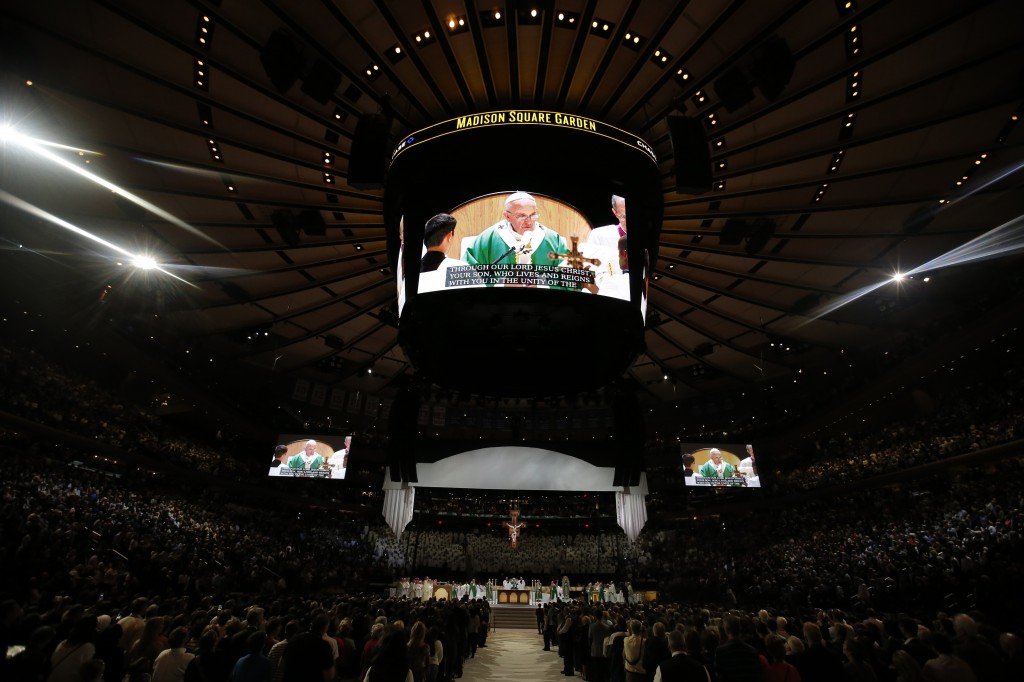 Pope Francis is shown on several large screens as he celebrates Mass at Madison Square Garden in New York on Sept. 25. Photo by Carlo Allegri/Reuters

Pope Francis celebrated Mass at the Cathedral Basilica of Saints Peter and Paul for the Archdiocese of Philadelphia:

He participated in the meeting for religious freedom with the Hispanic community and other immigrants in Independence Hall: 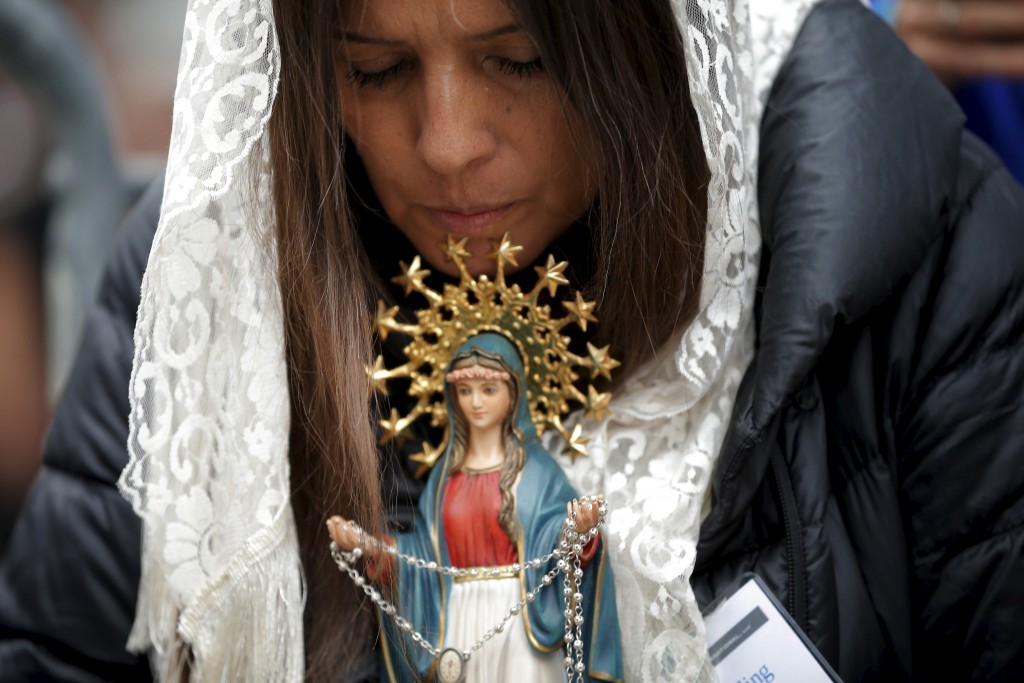 A woman prays during Mass with Pope Francis on the Benjamin Franklin Parkway in Philadelphia on Sept. 27. Photo by Brian Snyder/Reuters

The pope participated in a prayer vigil at the Festival of Families on Benjamin Franklin Parkway in Philadelphia: 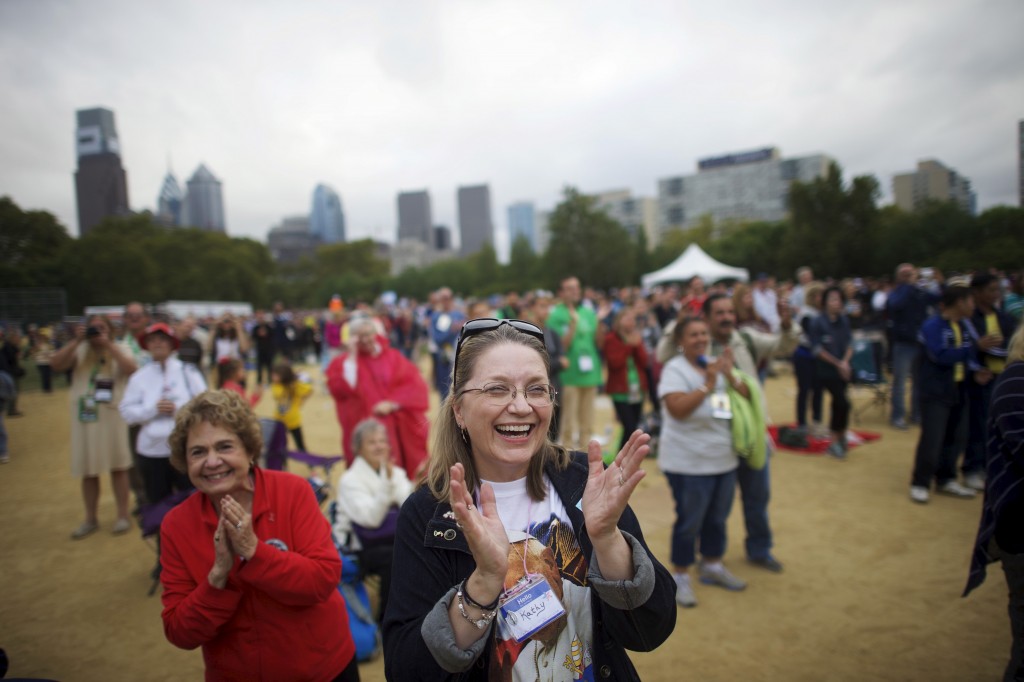 Crowds watch a Jumbotron of Pope Francis conducting Mass at the Festival of Families in Philadelphia on Sept. 27. Photo by Mark Makela/Reuters 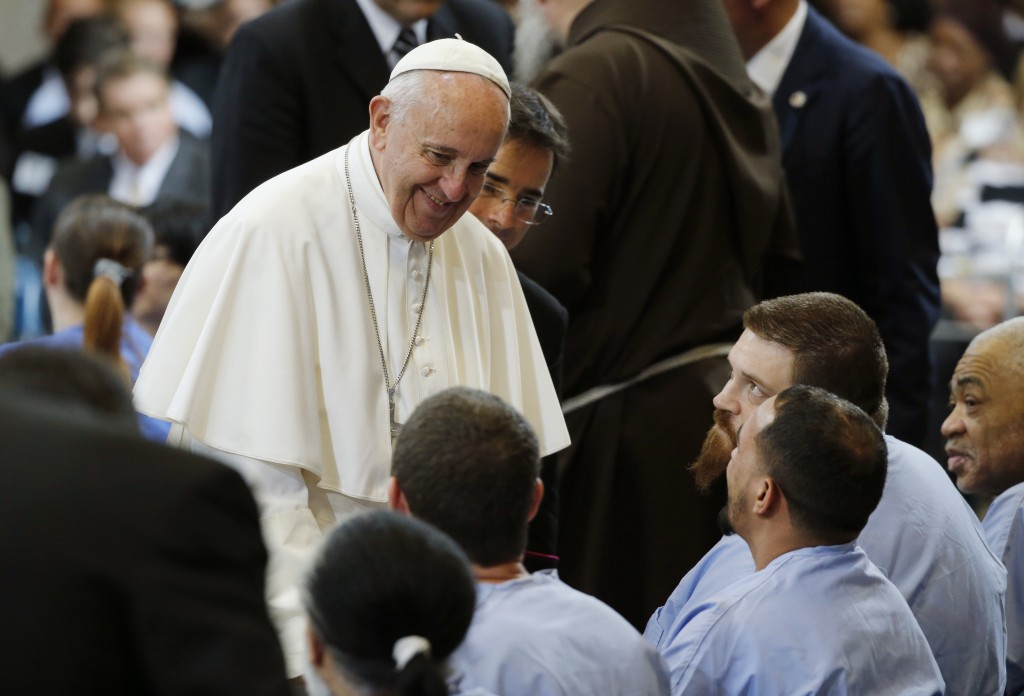 Afterward, the pope returned to the Festival of Families to celebrate an open-air Mass in the afternoon. He then met with organizers of the World Meeting of Families at Philadelphia International Airport in the evening before flying back to Rome. 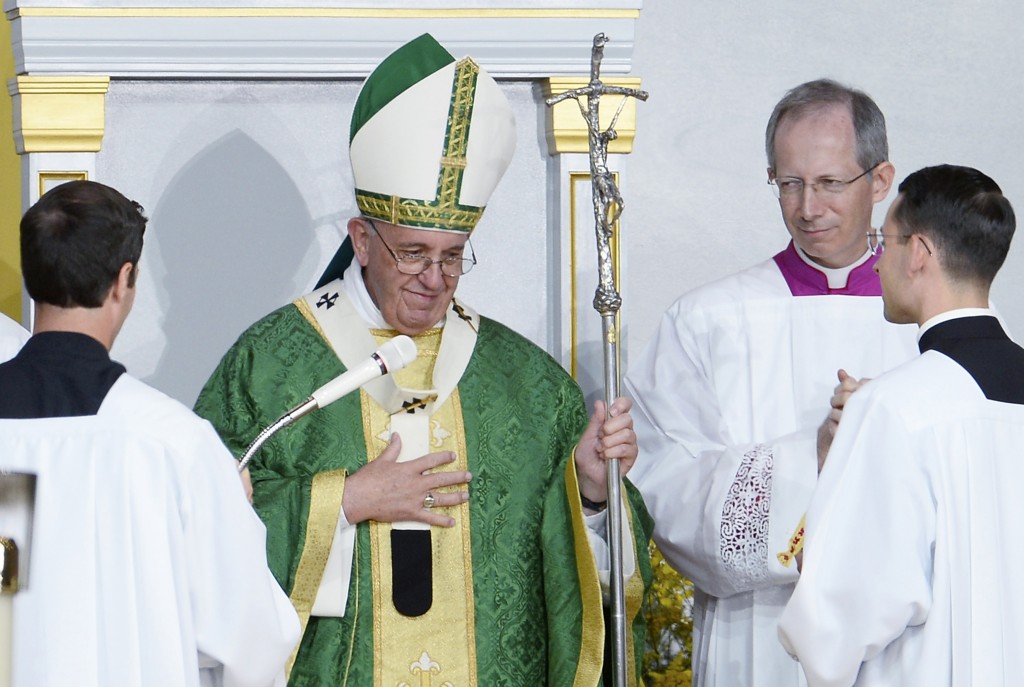 Pope Francis holds his staff on the altar during Mass in Philadelphia on the last day of his trip to United States Sept. 27. Pool photo via Reuters

Left: School children photograph Pope Francis after he arrives at the Lady Queen of Angels School on Sept. 25, 2015 in the Harlem neighborhood of New York City. Photo by John Moore/Getty Images