What we know about the latest migrant caravan traveling through Mexico

Thousands of Central American migrants are walking, taking buses and wading through rivers in a cross-continent effort to reach the United States.

The United Nations estimates the caravan has grown to about 7,200 migrants. The trek has entered the political debate ahead of the U.S. midterm elections.

Here is what we know and what’s next.

Who is in the caravan, and how big is it?

The caravan formed last week in northern Honduras and has grown in size ever since. The migrants reportedly are fleeing violence and poverty; many are hoping to find work in the U.S. to send money home to their families.

Over the weekend, more than 2,000 migrants crossed a bridge from Guatemala into Mexico in the Mexican town of Tapachula, while others tried crossing the Suchiate River. 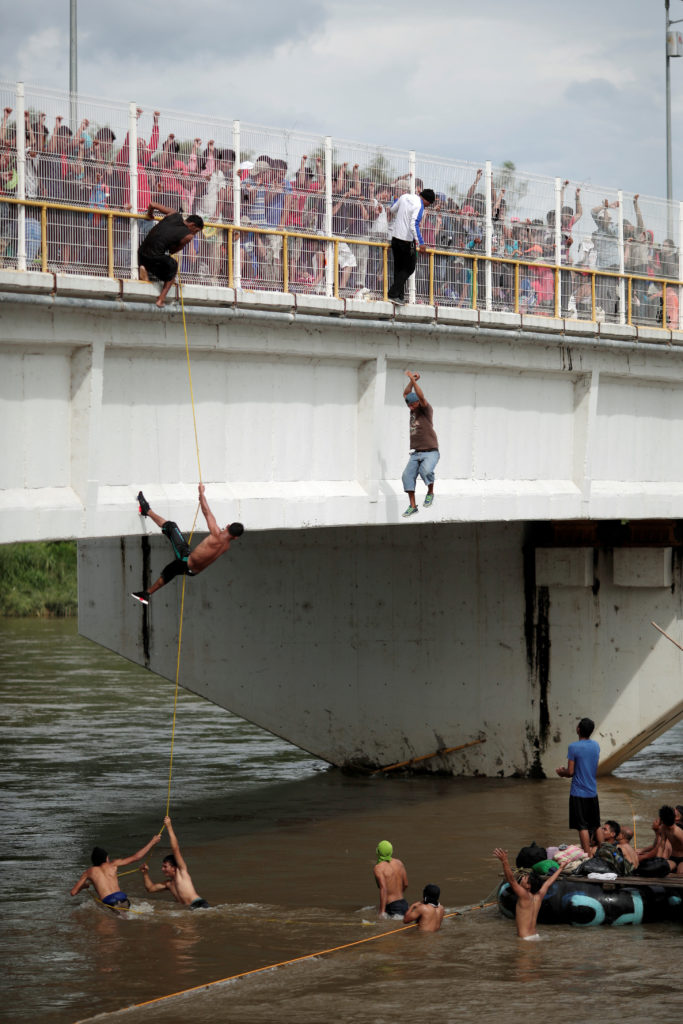 Migrants climb down from a bridge that connects Mexico and Guatemala on Oct. 19. Photo by Ueslei Marcelino/Reuters 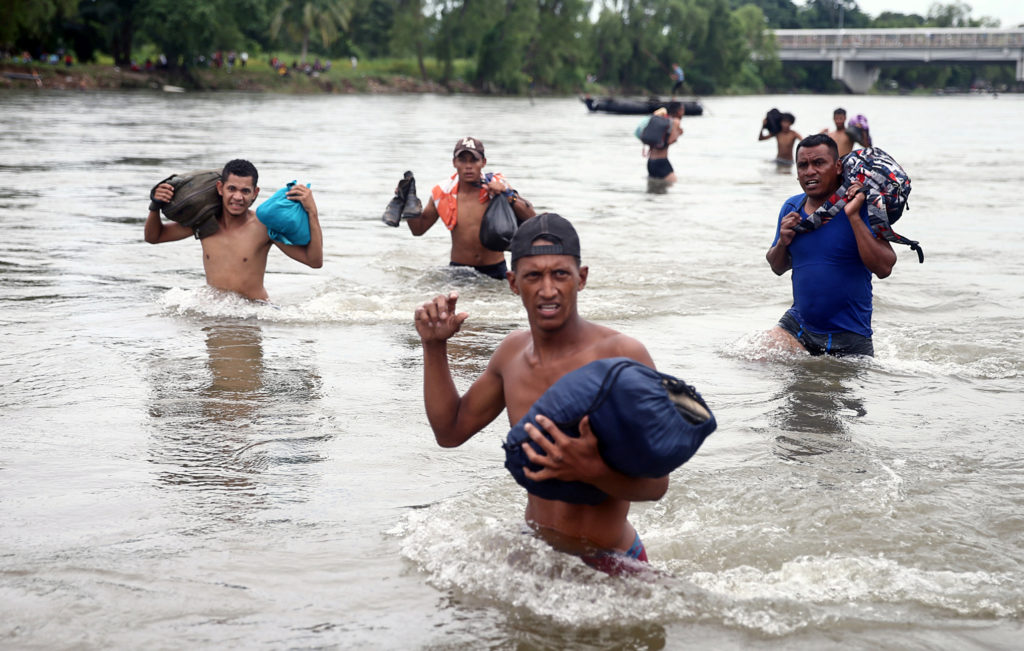 Some of the migrants crossed the Suchiate River to avoid the border checkpoint in Ciudad Hidalgo, Mexico, on Oct. 20. Photo by Edgard Garrido/Reuters

The Mexican government has requested help from the United Nations’ refugee agency to process the asylum requests.

The Associated Press reported on Wednesday that about 500 migrants, worn out from the trip, have accepted an offer from Mexican authorities to be bused back to their countries.

Police haven’t stopped the caravan outright, the Associated Press reported. As of Wednesday, the caravan was still more than 1,000 miles away from the nearest U.S. entry point in Texas.

How often do such caravans head to the U.S., and what’s different this time? 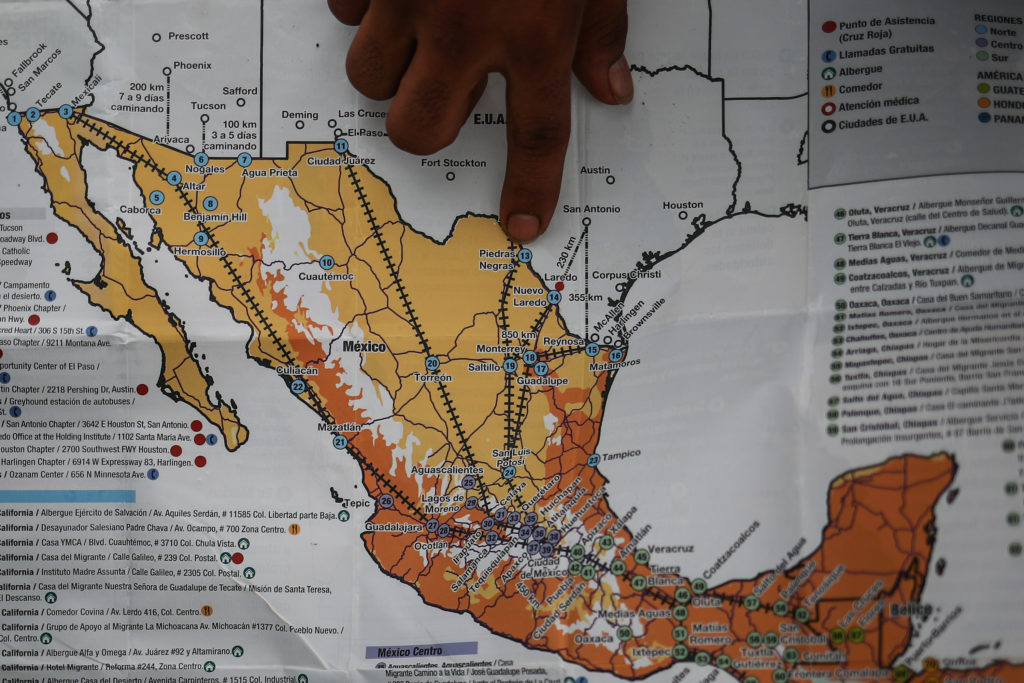 A man points at a map showing the routes through Mexico to the U.S. southern border. Photo by Adrees Latif/Reuters

Caravans have been staged for years by immigrant rights groups to raise awareness of the migrants’ troubles. This most recent one has been notable for its size and the attention it garnered.

“There have been periodic caravans, though none of this size and media coverage,” said Shannon O’Neil, a senior fellow for Latin America Studies at the Council on Foreign Relations. “It comes from a push of violence, poverty, and the lack of opportunities and a pull of U.S. possibilities — and often family — as well as smugglers urging clients and potential clients on,” she said.

While massive organized caravans are not commonplace, “more and more migrants have considered as matter of safety to travel in groups because of the dangers with traffickers and other delinquency taking place in the trek, particularly Mexico,” said Manuel Orozco, director of Migration, Remittances and Development at the Inter-American Dialogue.

What is Mexico’s reaction?

In April, when a caravan organized by Pueblo Sin Fronteras — a group that has organized these events for years to draw attention to the violence migrants face in their home countries — moved through Mexico toward the U.S., it ended up dissipating. Some migrants sought asylum in Mexico instead, while others split off and attempted to cross into the U.S. on their own.

By the time the April caravan reached the U.S., its numbers shrank from more than 1,000 to about 200.

No group has taken responsibility for organizing the current caravan. 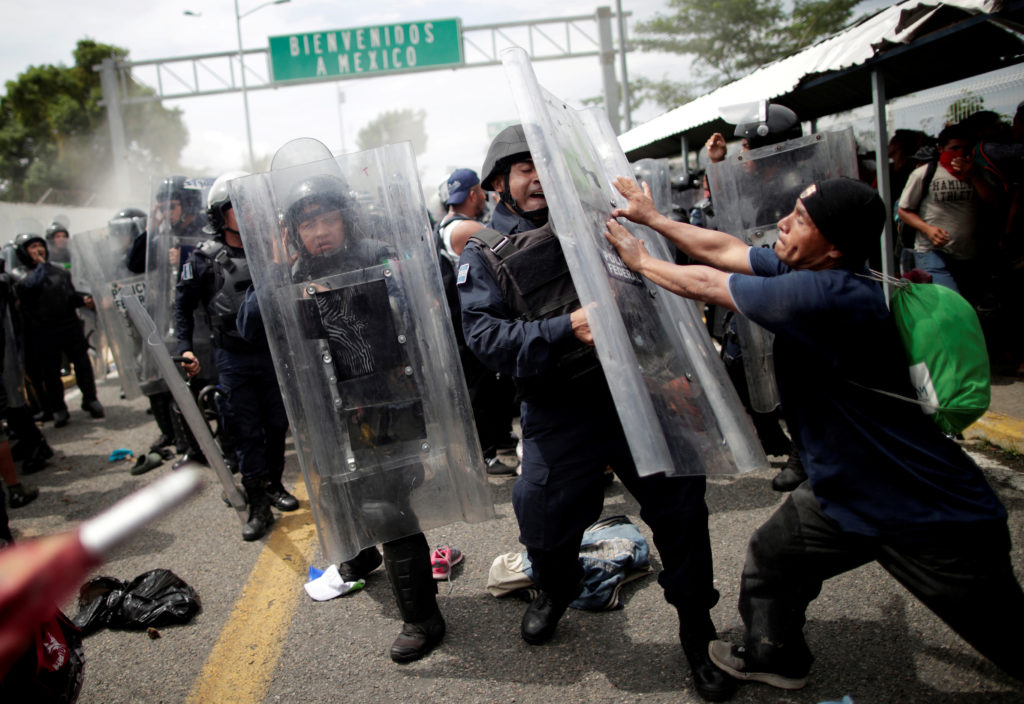 A migrant, part of a caravan trying to reach the U.S., hits the shield of a federal policeman at the Guatemalan checkpoint to enter Mexico, in Ciudad Hidalgo, Mexico on Oct. 19. Photo by Ueslei Marcelino/Reuters

Mexico has responded to the latest caravan by ramping up the number of immigration and police officials to monitor the southern border, in a bid to intercept the group earlier as it made its way from Guatemala.

Mexico also outlined a plan to address the thousands of Central American migrants moving through the country.

What is America’s approach?

As the caravan continues its journey north, President Donald Trump has called on the migrants’ home countries and Mexico to intervene.

The president threatened Monday on Twitter to begin “cutting off, or substantially reducing” aid to Central American countries because the Guatemalan, Honduran and El Salvadoran governments have failed to stop the caravan from leaving their countries, he said on Twitter.

Trump also tweeted that he has “alerted Border Patrol and Military” to the caravan heading to the U.S. southern border.

Previously, Trump has threatened to close off the U.S.-Mexico border if Mexican officials aren’t able to stop the caravans.

“I must, in the strongest of terms, ask Mexico to stop this onslaught — and if unable to do so I will call up the U.S. Military and CLOSE OUR SOUTHERN BORDER!” Trump tweeted last week.

In April, Trump asked the Department of Homeland Security to turn away that caravan if it reached the U.S.-Mexico border.

The U.S., however, cannot refuse migrants who are seeking asylum at the border, according to both the country’s own laws and international law.

“I think it’s just a way for him to rile up Americans who fear brown immigrants invading their borders, to create this image that a caravan of Central Americans are coming to descend upon America,” attorney Nicole Ramos told the PBS NewsHour during the earlier caravan’s efforts. 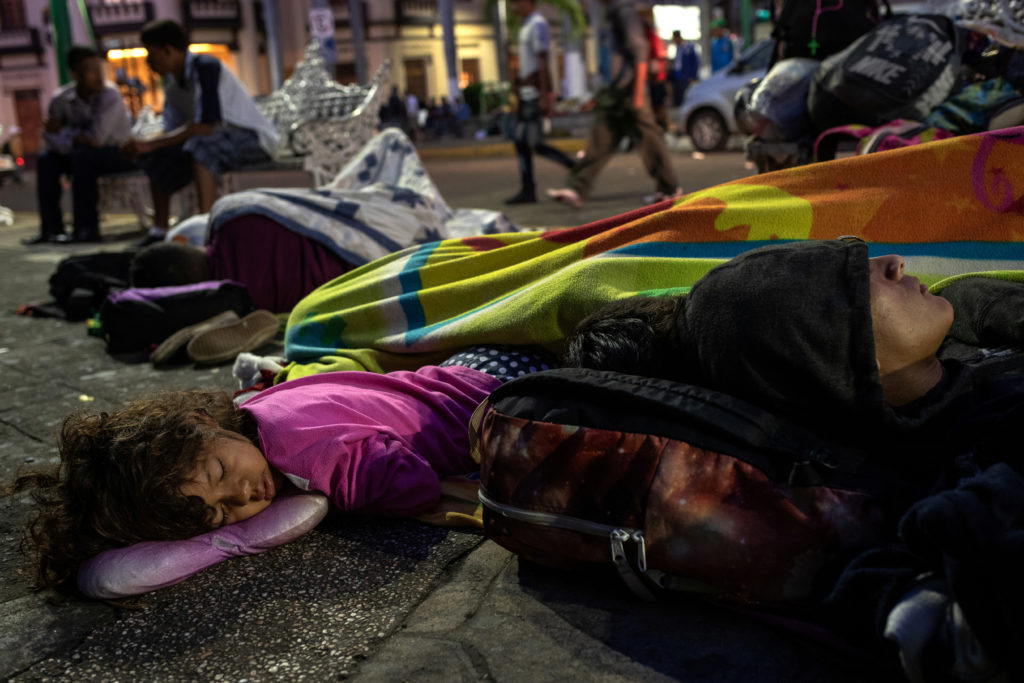 A family — part of the caravan heading north — sleeps along a sidewalk in the Tapachula city center in Mexico on Oct. 22. Photo by Adrees Latif/Reuters

Mexican Foreign Secretary Luis Videgaray Caso recently met with U.S. Secretary of State Mike Pompeo about caravans, saying that “of course, in Mexico we have the rule of law, and we shall apply — enforce the law, but there will also be a humanitarian way that we will think about the migrant in the first place.”

With midterm elections approaching on Nov. 6, Trump’s message on Twitter and at campaign rallies is that Democrats are hindering immigration laws that would address the issue.

“Every time you see a Caravan, or people illegally coming, or attempting to come, into our Country illegally, think of and blame the Democrats for not giving us the votes to change our pathetic Immigration Laws! Remember the Midterms! So unfair to those who come in legally,” Trump tweeted.

Mexico itself is transitioning to a new government: Mexican President Enrique Peña Nieto has about six weeks left in office before his successor, Andrés Manuel López Obrador, takes over Dec. 1. During his presidential campaign, Lopez Obrador has pledged a softer approach to immigration in Mexico, promising to protect the human rights of migrants.

Left: Central American migrants walk along a highway in Mexico near the border with Guatemala on their way to the U.S. on Oct. 21. Photo by Ueslei Marcelino/Reuters