What you should know about Trump’s Jerusalem announcement

President Donald Trump recognized Jerusalem as the capital of Israel on Wednesday and directed the State Department to begin planning to move the embassy there, upending decades of U.S. policy on one of the most contentious regional conflicts in the world.

“Old challenges demand new approaches,” President Trump said in a televised address at the White House. “It is time to officially recognize Jerusalem as the capital of Israel.”

Trump vowed to move the embassy to Jerusalem when he ran for president, and in making Wednesday’s announcement, he said he was fulfilling a campaign promise that previous presidents also made but failed to deliver.

The move won’t happen overnight and involves a complicated set of logistics that could take several years to finalize, administration officials said. Still, Trump’s announcement makes the U.S. the first country to recognize the holy city as Israel’s capital.

WATCH: Trump says it is time to officially recognize Jerusalem as the capital of Israel
By Larisa Epatko

Why is this so controversial?

Israel claims all of Jerusalem as its capital city, but Palestinians believe the Eastern portion of Jerusalem will be the capital of their own future state. Israel annexed East Jerusalem at the end of the 1967 Middle East war and built settlements there.

A religious compound within the Old City of Jerusalem — known as the Temple Mount to Jews and Haram al-Sharif to Muslims — houses the Al-Aqsa Mosque, the third holiest site in Islam. The ancient limestone Western Wall, remnants of the retaining wall that surrounded the Temple Mount, the holiest site in Judaism, borders it. The picturesque Dome of the Rock is where Muslims believe the Prophet Muhammad began his ascent to heaven, and where Jews believe Abraham attempted to sacrifice his son.

Past U.S. presidents have signed a waiver every six months to delay moving the U.S. Embassy from Tel Aviv to Jerusalem, as required by a 1995 law to preserve national security.

Trump said signing the waivers has done nothing to advance the peace process. “It would be folly to assume that repeating the exact same formula would now produce a different or better result,” he said.

The president signed a waiver — for now — to “avoid significant funding cuts” to the State Department, CBS reported. In conjunction, he signed a proclamation codifying his announcement.

What does this mean?

The move will likely destabilize the region and jeopardize peace negotiations between Israel and the Palestinian Authority, some analysts said. Some takeaways:

“Some individuals and some governments will be more reluctant to work with the United States, and those hostile to the United States will get a boost in popularity,” said Jon Alterman, a senior vice president and director of the Middle East Program at the Center for Strategic and International Studies.

Many see the decision as a departure from the traditional U.S. role as facilitator, Alterman said. “It will be telling if other countries follow the U.S. lead on these issues or not.”

Trump did not specify the next steps that will actually bring the two sides back to the table for a peace deal, said Lucy Kurtzer-Ellenbogen, director of the U.S. Institute of Peace’s Israeli-Palestinian Conflict Program.

“I think that is the missing piece here to determine whether this really is a bold move that is more than just a risk and has any opportunity of moving the process forward,” she said.

There was nothing specific in the speech that would legally change the current situation of the 300,000 Palestinians already living in Jerusalem, Kurtzer-Ellenbogen continued.

“The thing to watch for over the next few days is reactions on the streets in Jerusalem,” whether there are violent or nonviolent protests, and how all residents respond, she said.

What were Trump’s motivations?

Trump noted that there would be “disagreement and dissent regarding this announcement,” but said he believed the decision would lay the groundwork for a peace deal. He called on all leaders of the region to join in the “noble quest to lasting peace.”

Alterman said it’s unclear what Trump gains from this decision. Trump may have “extracted meaningful promises from Prime Minister Netanyahu in exchange for a gesture that gives Netanyahu a political boost.”

Trump may have thought he would “get a warm embrace from the U.S. public,” said Alterman. It’s possible Trump “thinks concern over the impact recognizing Jerusalem as Israel’s capital is misplaced, and as a bold and unconventional leader he’s showing that he’s smarter than the experts.”

How is the decision playing abroad?

World leaders had a mixed reaction to the news.

Palestinian leader Mahmoud Abbas, through a spokesman, “warned of the dangerous consequences such a decision would have to the peace process and to the peace, security and stability of the region and the world.”

Jordan’s King Abdullah also expressed concern, saying, “There is no alternative to a two-state solution and Jerusalem is key to any peace agreement.” 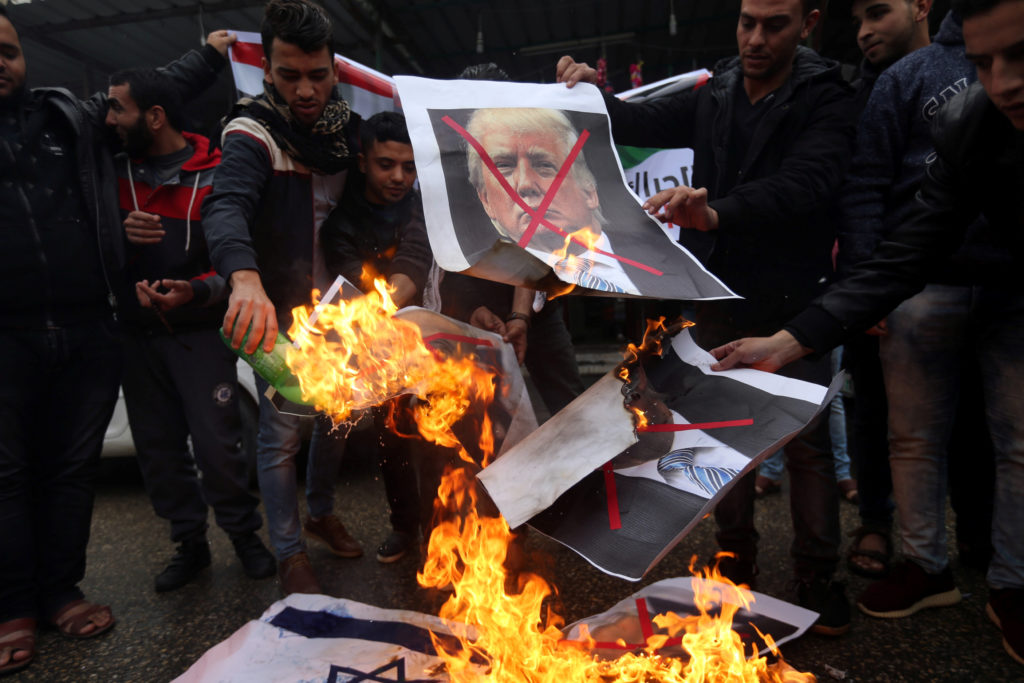 Palestinians burn posters depicting U.S. President Donald Trump and Israeli Prime Minister Benjamin Netanyahu during a protest against the U.S. intention to move its embassy to Jerusalem and to recognize the city of Jerusalem as the capital of Israel, in Rafah in the southern Gaza Strip, on Dec. 6. Photo by Ibraheem Abu Mustafa/Reuters

Turkish President Recep Tayyip Erdogan called the status of Jerusalem a “red line for Muslims,” and said Turkey would “follow this struggle to the very last moment with determination and we could even go right up to cutting our diplomatic relations with Israel.”

British Prime Minister Theresa May reiterated, “The status of Jerusalem should be determined in a negotiated settlement between the Israelis and the Palestinians” as part of a two-state solution. “The British Embassy to Israel is based in Tel Aviv and we have no plans to move it.”

Former Israeli prime minister Ehud Barak told PBS NewsHour anchor Judy Woodruff that recognizing Jerusalem and moving the American, as well as all embassies there, is something “we as Israelis want to see” and he appreciates Trump’s efforts to clarify its status.

Meanwhile, the Czech Republic announced after Trump’s speech that it would recognize West Jerusalem as the capital of Israel.

In a statement, the European nation’s Ministry of Foreign Affairs said it “considers Jerusalem to be future capital of both states, meaning the State of Israel and the future State of Palestine. The Ministry can start considering moving of the Czech embassy from Tel Aviv to Jerusalem only based on results of negotiations with key partners in the region and in the world.”

Even before the announcement, protesters in the Gaza Strip burned images of President Trump and Israeli Prime Minister Benjamin Netanyahu, and Palestinian leaders called for three days of rage.

The U.S. Embassy in Israel, currently located in Tel Aviv, told employees that due to the planned demonstrations, they “are not permitted until further notice” to visit Jerusalem’s Old City and the West Bank for personal travel, and warned them to avoid large crowds.

“If they become violent, we will defend ourselves and they will pay a heavy price,” Jerusalem Mayor Nir Barkat told CNN. The clarity Trump brought to the table tells the Palestinians that Jerusalem as Israel’s capital has to be a part of any deal, he said.

The Arab League scheduled an emergency meeting on Saturday at the request of Palestinians and Jordan to discuss the development, according to Reuters. And the U.N. Security Council is also planning to meet.

Left: An Israeli flag is seen near the Dome of the Rock, located in Jerusalem's Old City on the compound known to Muslims as Noble Sanctuary and to Jews as Temple Mount, on Dec. 6. Photo by Ammar Awad/Reuters