What’s at stake in the North-South Korea summit?

North Korea has committed to denuclearization several times this year, in meetings with South Korean leaders and, most visibly, at the Singapore summit with President Donald Trump in June. But it’s still unclear how much, if at all, North Korea has followed through. At this week’s summit — the third between Kim and Moon this year — Moon is tasked with getting more answers without putting his relationship with Kim (or the U.S.) at risk.

Here’s what to expect from the North Korea-South Korea summit and the impact it could have on the region and the world, including the U.S.

What have North and South Korea accomplished this year?

North Korea and South Korea have made progress on several fronts since the leaders signed an agreement — the Panmunjom Declaration — at their first meeting in April.

The two leaders also agreed under the declaration to meet this month in Pyongyang — the first time Moon will step foot in the North Korean capital, said Jean Lee, director of the Wilson Center’s Korea Center. “It’s clear that the leader of North Korea is trying to make a point to the United States: We may not be on the same page when it comes to denuclearization, but the Koreans are on the same page and we’re going to move forward with our relationship,” she said.

What’s the significance of the summit?

South Korea has a difficult balancing act of pursuing better economic cooperation with the North while not violating U.S. sanctions on North Korea, or doing anything else that might disrupt the U.S.-South Korea alliance, said Frank Aum, senior expert on North Korea at the U.S. Institute of Peace.

“I think the problem right now for South Korea is that it’s frustrated that it can’t do more in terms of inter-Korean cooperation because of the lack of progress in U.S.-DPRK (North Korea) negotiations,” Aum said.

In order to get U.S.-North Korean relations back on track, Moon might try to, among other things, seek more reassurance from North Korea that an end-of-war declaration would not mean the withdrawal of U.S. troops from South Korea, Aum said. The Korean War technically never ended with a peace treaty, though both sides have signed an armistice ending open hostilities.

The United States has a treaty of mutual defense with South Korea that dates back to the 1950s and has a military base with about 28,000 troops in Seoul. At his summit with Kim in June, Trump said the U.S. would halt “war games” with South Korea. But in August, Defense Secretary James Mattis said the U.S. had no future plans to end the joint military drills. 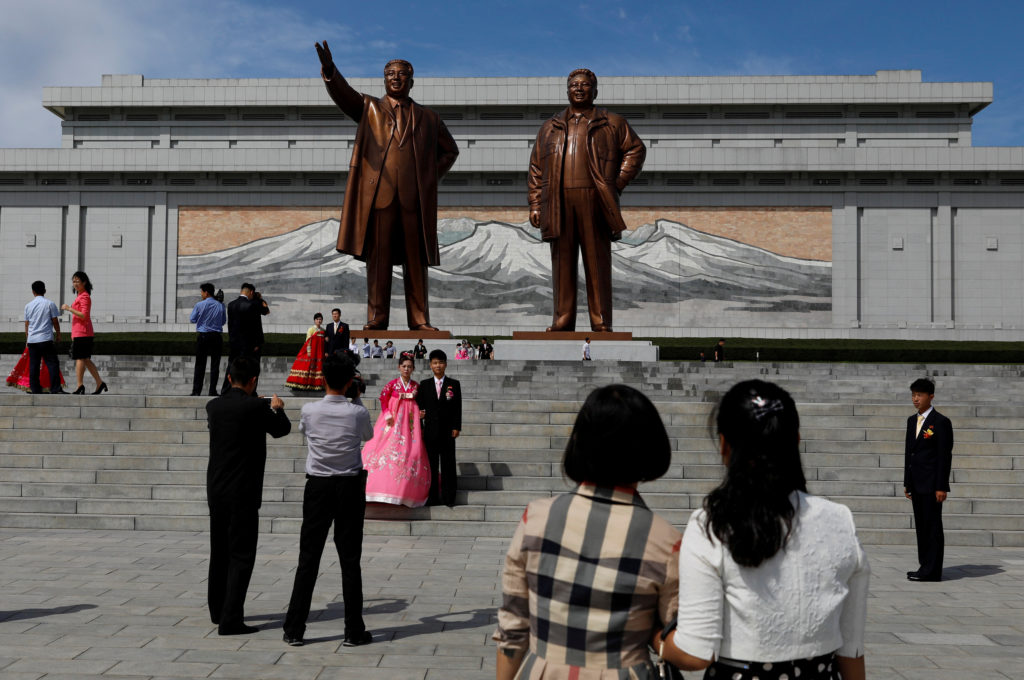 How could improved North-South Korea ties impact the U.S.?

The United States and Asian countries in the region generally support warming relations between the Koreas as long as there is consultation and coordination in the process, said Lisa Collins, a fellow with the Korea Chair at the Center for Strategic and International Studies.

“If actions taken by South Korea to improve relations with North Korea undermine the current (U.S.) policy towards North Korea — that might be seen as counterproductive,” she said.

Lee said the United States is letting South Korea take the lead on its relationship with North Korea, “but continuing down a path of reconciliation without requiring denuclearization will put Seoul and Washington at odds,” she said.

Trump delayed a visit to North Korea by Secretary of State Mike Pompeo in August, “because I feel we are not making sufficient progress with respect to the denuclearization of the Korean Peninsula,” Trump tweeted.

On Sept. 9, North Korea held a military parade marking the 70th anniversary of the country’s founding and did not display intercontinental ballistic missiles as it had in the past. The next day, Trump praised Kim on Twitter, and the White House said a second face-to-face meeting between Trump and Kim was in the works.

What does closer engagement mean for the rest of Asia?

Japan, like the U.S., wants South Korea to stand firm on the issue of denuclearization, said Yuki Tatsumi, co-director of the East Asia Program and director of the Japan Program at the Stimson Center. North Korea fired several missiles over Japan last year. Given that the U.S.-North Korea negotiation over North Korea’s denuclearization seems to have lost some of its initial momentum, “Japan would not want to see South Korea going too far out on engaging North Korea,” she said.

China also is supportive of a “certain amount of reconciliation” between the two Koreas, Lee said. “The Chinese would rather have stability and peace on the Korean peninsula (than) instability right on their doorstep.”

According to Aum, the next step in inter-Korean cooperation will include economic cooperation currently prohibited by sanctions.

Both China and Russia backed U.N. sanctions against North Korea over its nuclear program, though both countries would benefit from projects like updating and expanding North Korea’s railway system, Lee said. It’s a “delicate dance” for all players in the region. “On the one hand they want peace and stability but they also don’t want North Korea to continue building a nuclear program.”

And the “sanctions are only good if the member nations enforce them,” she added. 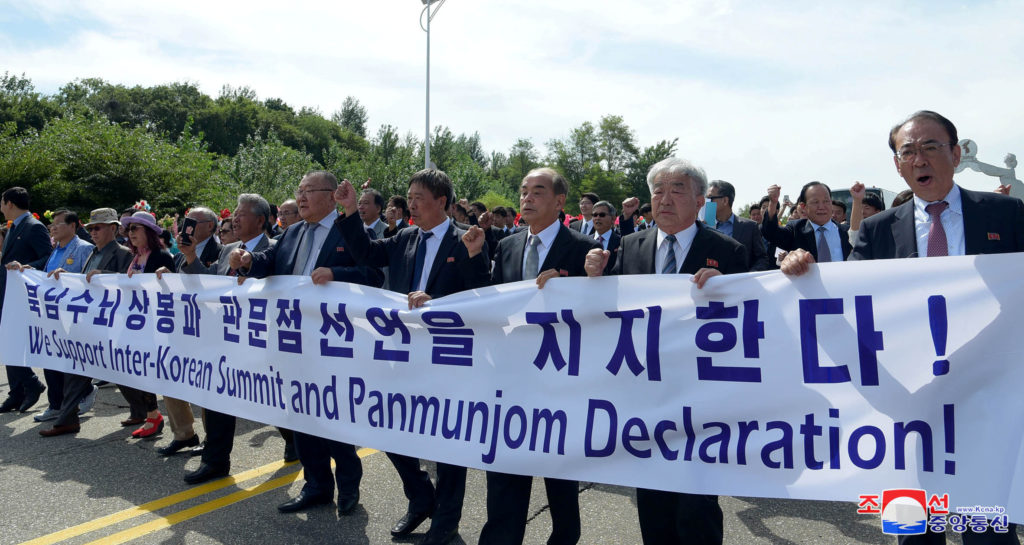 The reunification of North and South Korea, if it happens, is still far down the road, analysts say.

Though reunification may be out of reach, the importance of other forms of North and South Korean reconciliation, including re-establishing communications, cannot be overstated, Lee said. “It’s a significant step after nearly 10 years of tensions between those two governments. But it is way too soon to talk about reunification,” she said.

Left: South Korean President Moon Jae-in met for a second time with North Korean leader Kim Jong Un in the border area of Panmunjom on May 26, 2018. Handout photo from the Presidential Blue House via Reuters