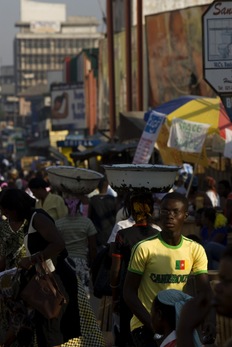 Two of the world’s major financial institutions are looking at an issue only occasionally associated with economic development — how to curb violence.

A new report on that topic will be on the agenda of the annual spring meeting of the World Bank and International Monetary Fund starting this weekend in Washington.

But even though the World Bank underwrote the report, one of its findings is that solutions for violence will have to come from within countries, not from outside Western institutions.

The World Bank’s 2011 World Development Report estimates that 1.5 billion people, or about one-fourth of the world’s population, live in areas experiencing or threatened by violence, said report co-director Nigel Roberts.

It’s a toxic mix of stress factors — both internal, such as unemployment, and external, for example international drug trafficking — along with weak and illegitimate institutions, said Roberts.

“The key is to have systems, traditions and processes that somehow mediate those pressures within society, so that you don’t have significant and large groups of citizens resorting to violence because of frustration because they feel they have no other way of redressing their grievances,” he said.

Countries experiencing repeated cycles of violence must gain an understanding of the stress factors driving the violence and impeding development, and come up with ways to deal with them, he said. But “it’s not a question of the World Bank or a bilateral agency devising its own strategy in isolation. It has to be a national process that’s supported by agencies like ourselves.” The countries themselves need to be convinced of the approach, he said.

So what can international donor organizations like the World Bank do? Some changes will be necessary and are under consideration, said Roberts.

First, combining efforts with other agencies that have mandates and expertise in security issues would help institutions like the World Bank, which have long worked to assist societies and governments deliver economic benefits and with anti-corruption measures, but not with security, he said. Partner organizations could include the United Nations, with its peacekeeping mandate, and regional organizations with political mandates, he added.

“There’s always a need to coordinate with other donor partners, but it’s particularly acute when you’re both saying you have to take into account all these factors and at the same time saying you can’t do it all yourself.”

Also, the World Bank and other bilateral aid agencies are ingrained with an element of risk aversion, which works against moving quickly to avert conflict and staying involved for the long haul, according to Roberts.

The large donor agencies are beholden, and rightly so, to their clients and the people within their countries to not waste money or have it used corruptly or inefficiently, he said. And those concerns “tend to take precedence over the need to act quickly, take certain well-calculated risks and to understand that in situations of volatility, you have to expect that certain things you try will not work, and that you will not be able to account for every penny that you spent.”

The report suggests another change — getting rid of the drastic ups and downs of aid flow to fragile countries by instead varying the oversight mechanisms. “In riskier situations, you could apply tighter supervision standards but maintain greater consistency in the flow of funds,” said Roberts.

And finally, institutions like the World Bank should focus on recruiting and deploying specialists in the problems unstable countries face, or find new ways to partner with other agencies and specialists who might not want to work for the Bank and lose their policy or academic identity, but still want to be a partner, he said.

And a bright spot in the report is how countries that have successfully overcome their cycles of violence, such as Ghana and Indonesia, can provide insight to other countries troubled by violence, said Roberts.

“I would argue that many of the urban crime prevention programs that come from Latin America … have applicability in North America and Europe as well as other emerging middle-income countries,” he said.

This sharing between countries hasn’t necessarily been the transmission route in the past, but there’s more of a willingness now on both sides for it to be one, he said.

Read the overview or the full 352-page report.