5 ways to take great concert photos without being a jerk

WASHINGTON — Leon Armour Jr. was photographing the hardcore punk band the Cro-Mags in Washington, D.C., when a stage-diver crashed into his camera.

“This kid climbed up on the stage and landed on me and kicked me. Everyone was laughing. I turned around and hit him upside the head with the camera. It stunned him pretty good,” he recalled.

The camera, an old titanium Nikon, was fine. And the concert-goer lived to see the encore.

That’s the life of a concert photographer.

“You can’t stop a mosh pit,” said Armour, of Visual Stimuli Studios, who has photographed hundreds of shows. He gave us five more tips on how to take great concert photos:

1. Make nice with your neighbors

Tell people around you that you’ll be taking photos of the first few songs to encourage them not to bump into you. “Try to get them on your side,” Armour said (although it might not have helped at the Cro-Mags).

Andrew Stockdale of Wolfmother. A single colored light can affect your image and draw in the viewer. Photo by Leon Armour Jr./Visual Stimuli Studios

“I like to look at the setup of the stage, the lights and band equipment beforehand so I can know what kind of lighting to expect,” said Armour.

During the show, the lighting goes from light to dark, and colors change. Use a camera with a lens that has a wide aperture — which collects more light — to help in dim settings, he said. 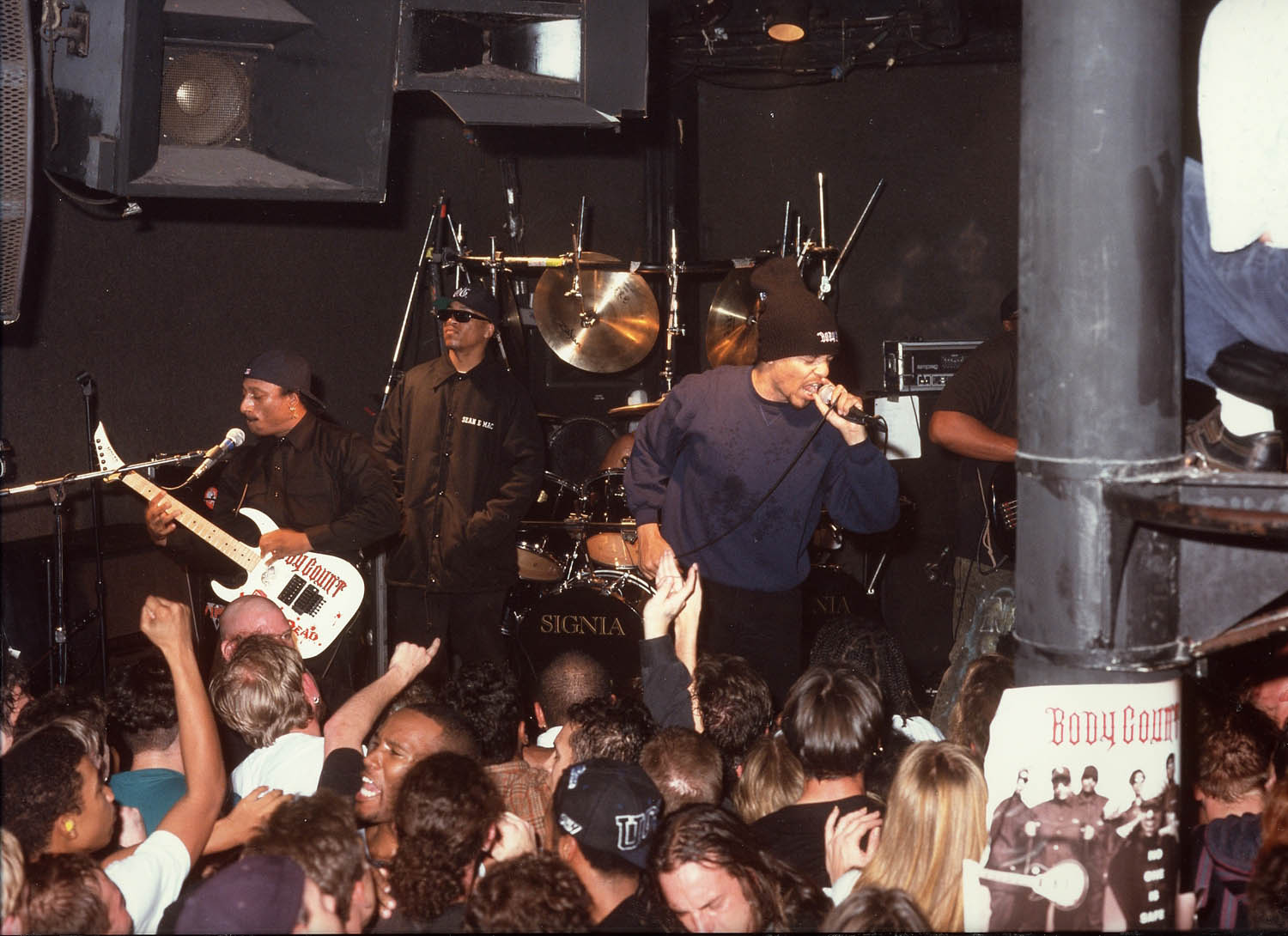 This photo of Body Count is an example of getting to know the size of the room, where you can and cannot shoot from, the size of the stage and the kinds of stage lighting. Photo by Leon Armour Jr./Visual Stimuli Studios

It seems counter-intuitive, but don’t shoot directly in front of the lead singer, Armour said. “The mic is often blocking their face. You’re always shooting up. Rarely are you on their level. The best angles are from the side,” he said.

Try to get the musician’s dominant side. If they’re holding a guitar, and it points to the left, they’ll lean to the right. That’s where you want to be. “You’ll get more of their face that way,” Armour said.

Get to know the size of the room and whether you can move around or not. If you can back up far enough, take a few pictures that include part of the audience for variety.

4. Don’t erase your photos until you get home

It’s tempting, especially if you’re using a camera phone with limited space, to delete photos that you think aren’t good. Resist the temptation.

“Even a shot that’s not completely in focus can still really be a good shot. It could be the essence of the band. Look at them in a separate setting. Look at them all,” Armour said. 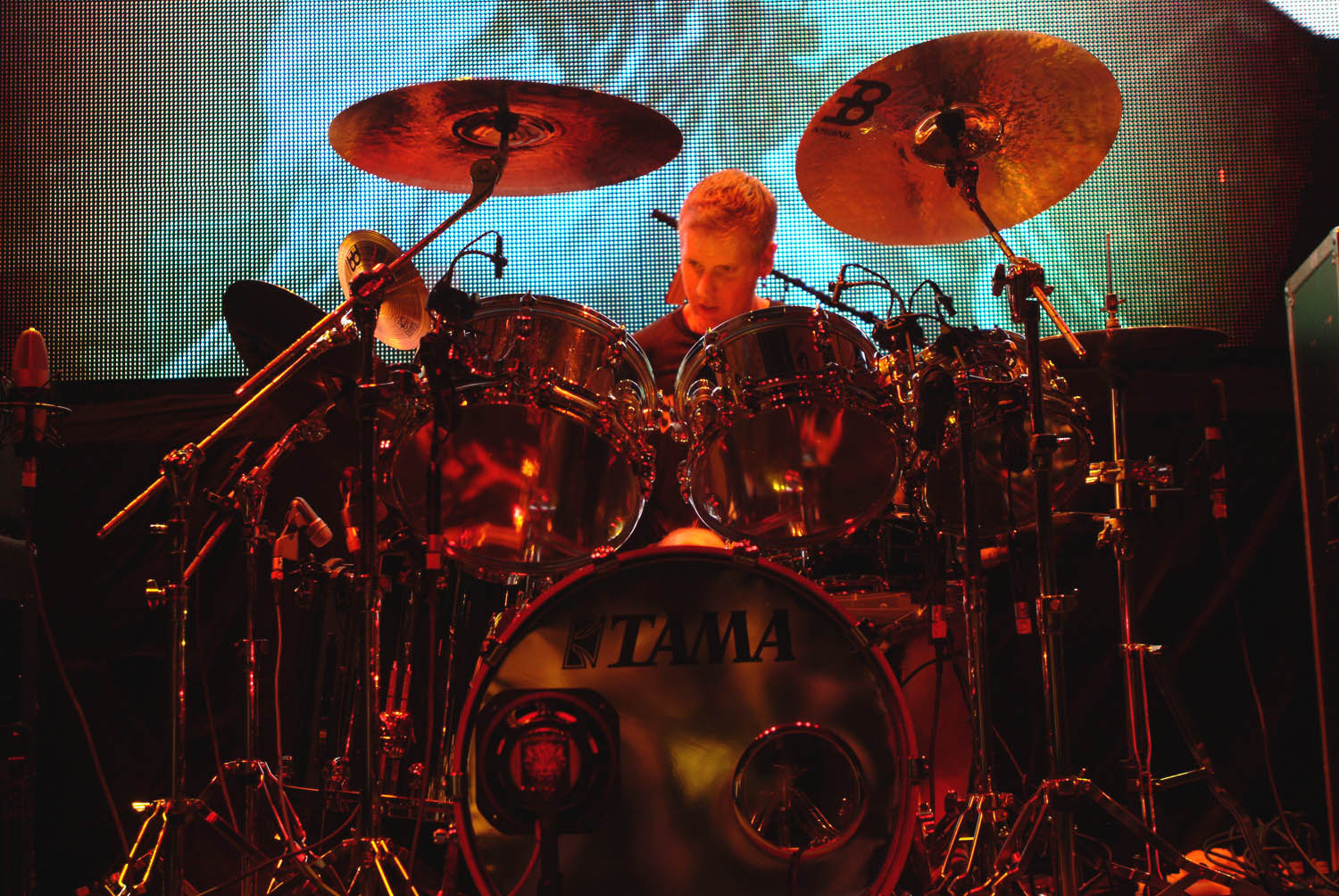 Drummer Brann Dailor of Mastodon. This photo shows how even in low light, if the colors are soft (red) and bright (yellow), they can make an image pop and draw in your eyes. Photo by Leon Armour Jr./Visual Stimuli Studios

5. Be flexible and patient

Bands can decide, even up to the last minute, that they don’t want pictures or videos taken of their shows. Abide by their decisions.

“Sometimes it has nothing to do with the photographers at all; maybe they didn’t have the right wine backstage,” said Armour. “Be prepared to change.”

Or wait. Armour was photographing an after-hours party in New York City where Grace Jones was supposed to perform, but she was three hours late. He stuck it out while the other photographers left.

During the delay, Armour met one of Jones’ friends and got to go backstage to meet the singer. “She was very nice,” he said. “She was shorter than I thought.”

Roll with it, and embrace the unexpected. “When you’re shooting a landscape, you know exactly what you’re going to get,” Armour said. “One of the reasons why I love shooting live bands: each experience is a different one.”

READ MORE: This D.C. rock house was born from punk and suits