A gunman fired into the crowd at an outdoor concert Sunday night along the Las Vegas strip, killing at least 58 people and injuring more than 400 others.

Around 10 p.m. local time on Sunday, as country music artist Jason Aldean was performing at the Route 91 Harvest Festival, a gunman began to fire from the 32nd floor of the nearby Mandalay Bay Hotel onto the crowd of more than 22,000 people. Members of the audience began screaming and running to find cover. The gunfire lasted about 5 to 10 minutes, witnesses said.

Aldean posted on Instagram that he and his crew were OK. “It hurts my heart that this would happen to anyone who was just coming out to enjoy what should have been a fun night,” he said. 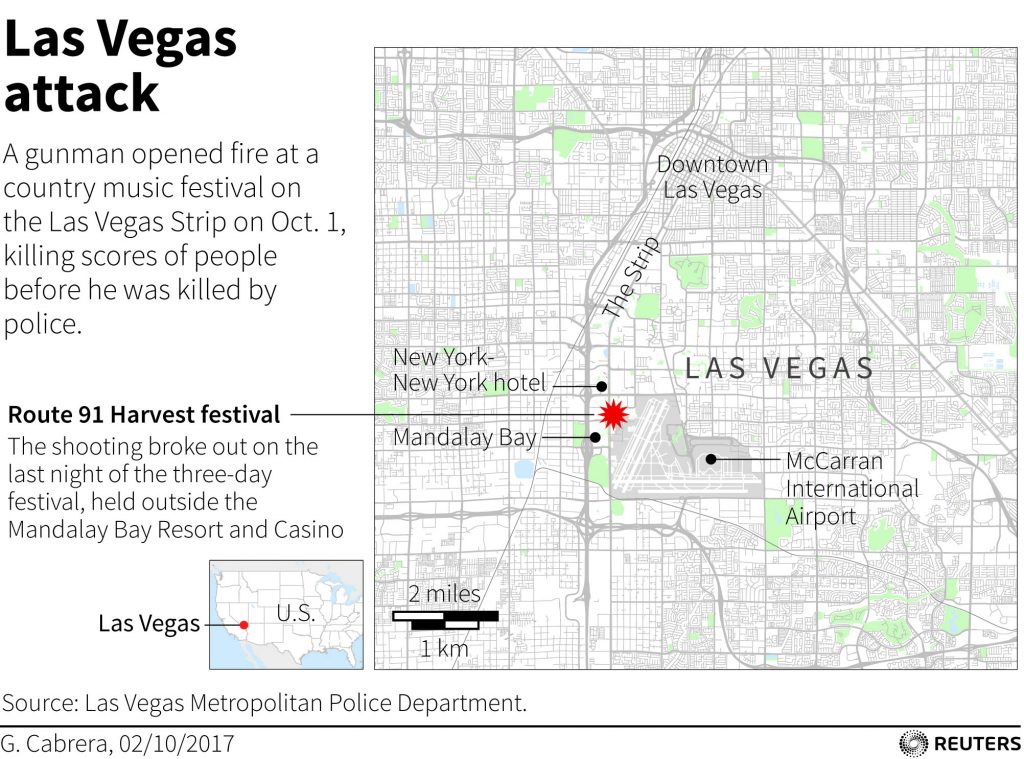 The AP posted the following raw video of the scene (WARNING: Some viewers may find the video disturbing):

A SWAT team from the Las Vegas police department located the room from which the suspect had been shooting. The team found the suspect dead, according to a statement from police. Clark County Sheriff Joe Lombardo said he believed the suspect killed himself before police arrived.

Who is the shooter?

Lombardo identified the gunman as Stephen Paddock, 64, of Mesquite — a town outside of Las Vegas. Lombardo said police located more than 40 firearms belonging to Paddock; 23 firearms inside the hotel room and 29 at his home in Mesquite. Police have yet to determine a motive.

The suspect’s brother and neighbor described him as a professional gambler and a real estate investor.

Police do not believe Paddock was associated with a militant group, Lombardo said. Paddock’s girlfriend, who was in the Philippines at the time of the shooting, returned to the United States where she was met by FBI agents for questioning.

Police in the Dallas suburb of Mesquite, Texas told the Associated Press that Paddock lived there from 2004 to 2012, though it may have been longer. Lt. Brian Parish told the AP that he had no indication officers interacted with Paddock during that time.

Officials said in addition to the firearms, they found explosives and several thousand rounds of ammunition in Paddock’s home.

At least 58 people have died from the attack, and 489 people are injured, police said. The injuries were from bullets and efforts to flee the parking lot. On Tuesday, hospital officials said at least 45 people remain in critical condition.

Hours after the shooting, people in Las Vegas lined up around the building to donate blood. Centers soon had enough donations, thanks to an “overwhelming turnout,” Fasulo said.

A blood donation center in Las Vegas had a line of people out the door at 4 a.m. after Sunday's deadly shooting https://t.co/wqTAVr3w1a pic.twitter.com/UTgyfyJNW3

How lawmakers are reacting

President Donald Trump sent his condolences to those affected via Twitter:

My warmest condolences and sympathies to the victims and families of the terrible Las Vegas shooting. God bless you!

Mr. Trump expressed his support for the people of Las Vegas in an address to the nation later in the day. “We know that God lives in the hearts of those who grieve,” he said. “In moments of tragedy and horror, America comes together as one. … Our unity cannot be shattered by evil.”

He also held a moment of silence at the White House with first lady Melania Trump.

The president plans to travel to Las Vegas on Wednesday to meet with families of the victims, law enforcement officials and first responders. He ordered flags to be lowered half-staff at the White House, public buildings and at military posts until Friday night in honor of the victims.

“My hearts aches for the victims, their loved ones, and our community,” Nevada Democratic Rep. Dina Titus said in a statement Monday. “I am grateful for law enforcement’s swift response and the many good Samaritans whose selfless acts of bravery showcased Las Vegas’ values to the world.”

Las Vegas is a “resilient and benevolent town that will not be intimidated by acts of violence,” she said.

My full statement on the shooting. pic.twitter.com/BMNQa0R0Be

“America woke up this morning to heartbreaking news. This evil tragedy horrifies us all,” House Speaker Paul Ryan said in a statement. “The whole country stands united in our shock, in our condolences, and in our prayers.”

Titus told reporters at a police briefing this morning that she and other local politicians stayed out of the way of first responders and officers “because you don’t want to turn a personal tragedy into a political event.”

Several Democrats, however, raised the issue of gun control in the wake of the shooting. Rep. Carolyn Maloney of New York called on Congress to act to “prevent the next senseless tragedy.”

“As we wait for answers as to how this happened and what the shooter’s motivations were, one thing is clear: enough is enough,” she said in a statement. “It is time for Congress to act. It is time for us to stop just sending our ‘thoughts and prayers’ and time for us to get serious about gun safety.”

House Minority Leader Nancy Pelosi, D-Calif., sent Ryan a letter asking him to create a select committee on gun violence. She also asked Ryan to bring legislation that would close the federal background check loophole on gun purchases to the house floor for a vote.

Democratic Rep. Steve Cohen of Tennessee tweeted that Democrats were on the “NRA hit list.” “Why do we lead the world in non Isis mass killings? Too many crazies?too many #guns?laws to keep crazies from guns?” he also posted to Twitter.

Why do we lead the world in non Isis mass killings? Too many crazies?too many #guns?laws to keep crazies from guns? #gunsense #GUNviolence

Democrats are on NRA hit list And we won't vote for silencers and are for No fly,no buy common sense #GunLaws #SandyHook #gunreform https://t.co/02aQ4Z8lgu

The PBS NewsHour’s Joshua Barajas contributed to this report.

Left: Police gather at the intersection of Tropicana Avenue and Las Vegas Boulevard South after a mass shooting at a music festival on the Las Vegas Strip on Oct. 1. Photo by Las Vegas Sun/Steve Marcus via Reuters