The latest on Hurricane Harvey and how you can help

As the remnants of Harvey headed north and floodwaters in Houston began to recede, attention turned toward assessing the damages and the lengthy rebuilding process for one of the costliest disasters in U.S. history.

Officials said 37,000 homes were heavily damaged and nearly 7,000 were destroyed, along with thousands more requiring minor repairs, the Associated Press reported. About 32,000 people were staying in shelters and would need to find temporary housing.

Floodwaters forced oil refineries along the Texas Gulf Coast to close temporarily, representing about one-fifth of U.S. refining capacity. On Thursday, operators of a chemical plant in nearby Crosby reported two early morning explosions due to a failed cooling system. The Environmental Protection Agency and local officials released a joint statement saying they were monitoring the fires and air quality. 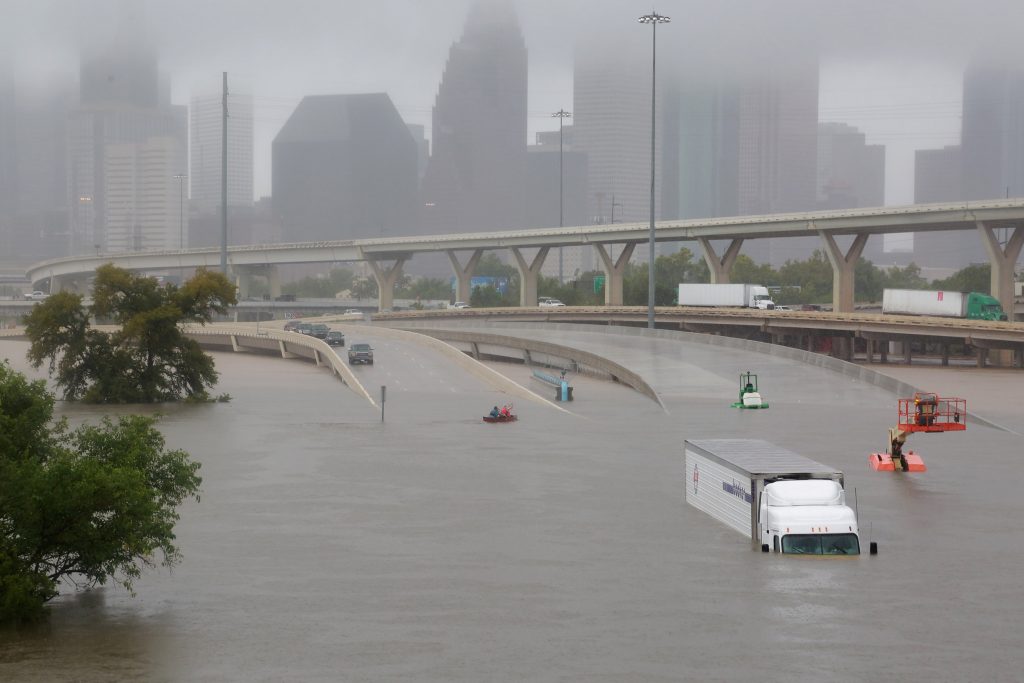 Harvey made landfall in Texas as a Category 4 hurricane on Aug. 25, headed to the Gulf of Mexico and then backtracked to Texas. Five days of consecutive rain dumped nearly 52 inches of water in Houston, the National Weather Service reported, breaking a national record. 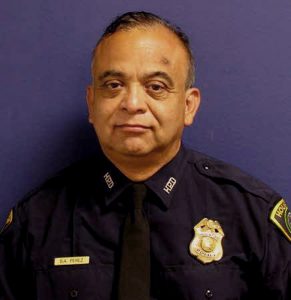 Photo of Sgt. Steve Perez from the Houston Police Department via Reuters

Authorities put the latest death toll at 39, including six family members whose bodies were pulled from a van that had swept off a Houston bridge into a bayou, reported the AP.

Sgt. Steve Perez of the Houston Police Department drowned Aug. 27 after driving into a flooded underpass while trying to get to work during the hurricane. Houston Police Chief Art Acevedo fought back tears at a press conference Tuesday while describing his colleague’s dedication. Perez is survived by a wife and two adult children.

In another case in Beaumont, Texas, rescuers found a toddler clinging to her drowned mother who had tried to bring her to safety through a flooded parking lot, when they were swept away by the rushing waters from a drainage canal. 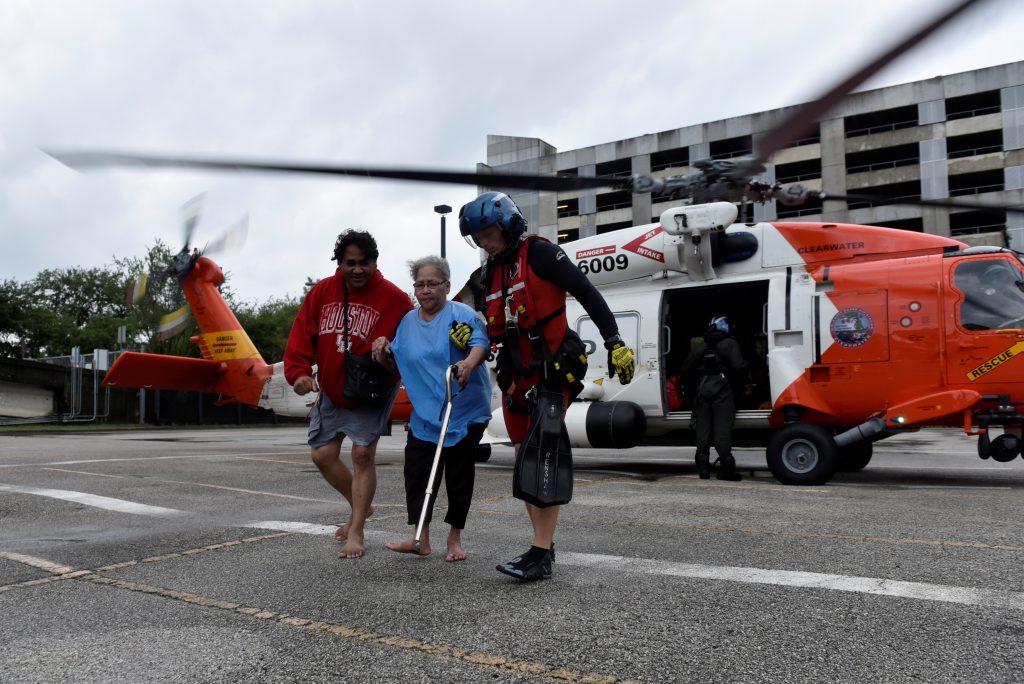 Evacuees Rickey Manuel (left) and Marjory Manuel (center) exit a U.S. Coast Guard helicopter that rescued them after Hurricane Harvey inundated the Texas Gulf Coast with rain and flooded their home in Houston, Texas, on Aug. 27. Photo by Nick Oxford/Reuters

Most organizations are asking for cash donations to help the victims of Harvey.

Where to donate cash 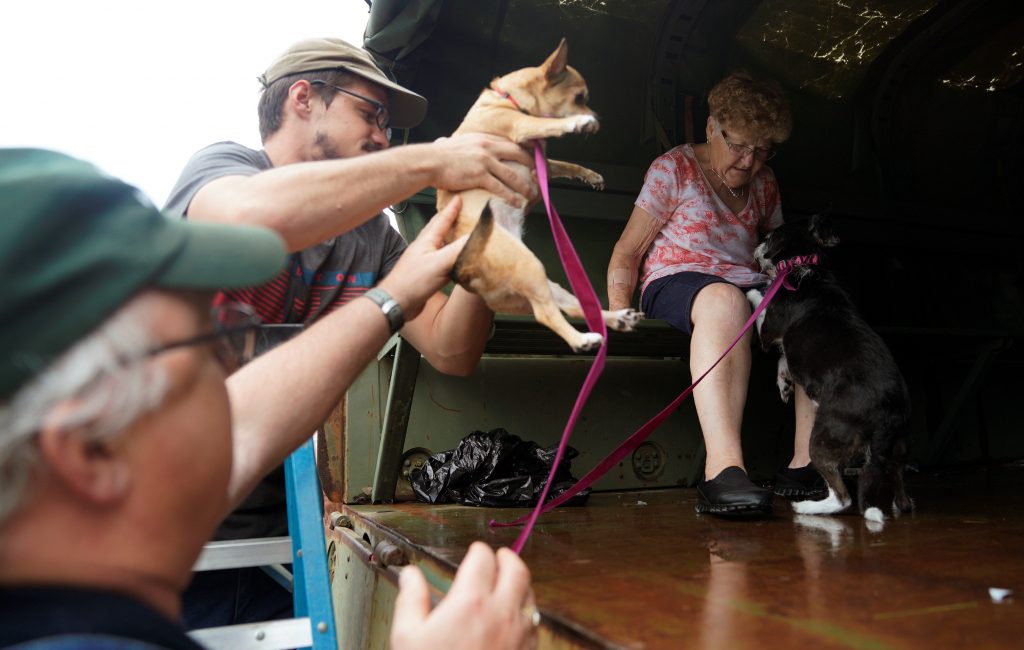 Pets are evacuated from flood waters from Hurricane Harvey in Dickinson, Texas, on Aug. 27. Photo by Rick Wilking/Reuters

How is the state responding?

Texas officials and first responders are focused on “rescuing every person we can find,” Texas Gov. Greg Abbott has said. “This is a door-by-door process.”

He said 24,000 National Guard troops, including 10,000 from other states, were deployed in Texas. He put 33 counties under the federal disaster declaration.

Houston Mayor Sylvester Turner on Friday urged people in west Houston who remained in homes with standing water to leave for shelters. He said the water level is not expected to go down over the next 10 to 15 days, and it would help free up first responders from bringing them supplies.

Turner earlier this week defended his decision not to issue an evacuation order for Houston, saying the city was not in the hurricane’s direct path and it would have been “dangerous” to put 6.5 million people on the road all at once.

Houston Police Chief Art Acevedo, meanwhile, said Friday that shots were fired at police in two instances: at a rescue vehicle and unmarked patrol car. In both cases, no officers were hurt, he said. 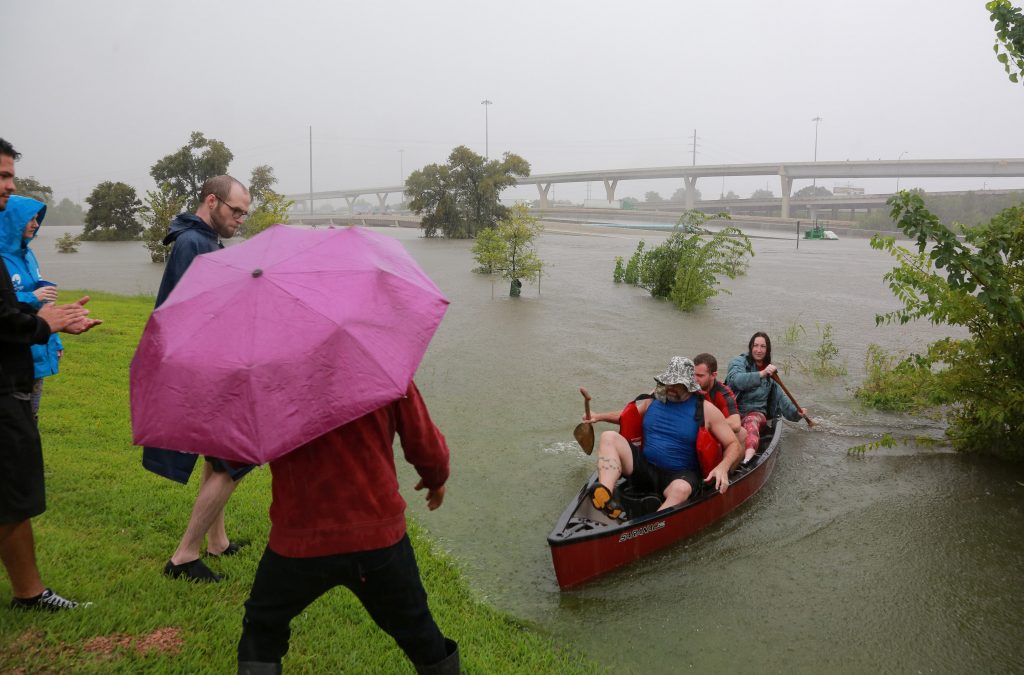 Area residents use a kayak to rescue motorists stranded on Interstate highway 45 which is submerged from the effects of Hurricane Harvey in Houston, Texas, on Aug. 27. Photo by Richard Carson/Reuters

What is the federal response?

The Federal Emergency Management Agency, or FEMA, estimated 450,000 victims of the hurricane would file for relief. FEMA Administrator Brock Long said at a news conference Monday that his agency dispatched 8,500 staff members to assist in the state’s recovery.

Health and Human Services Secretary Tom Price has declared a public health emergency in Texas and Louisiana to “make sure we can address an epic storm,” he said.

President Donald Trump went to Corpus Christi, Texas on Tuesday to survey the damages. “We are going to get you back and operating immediately,” he told residents there. 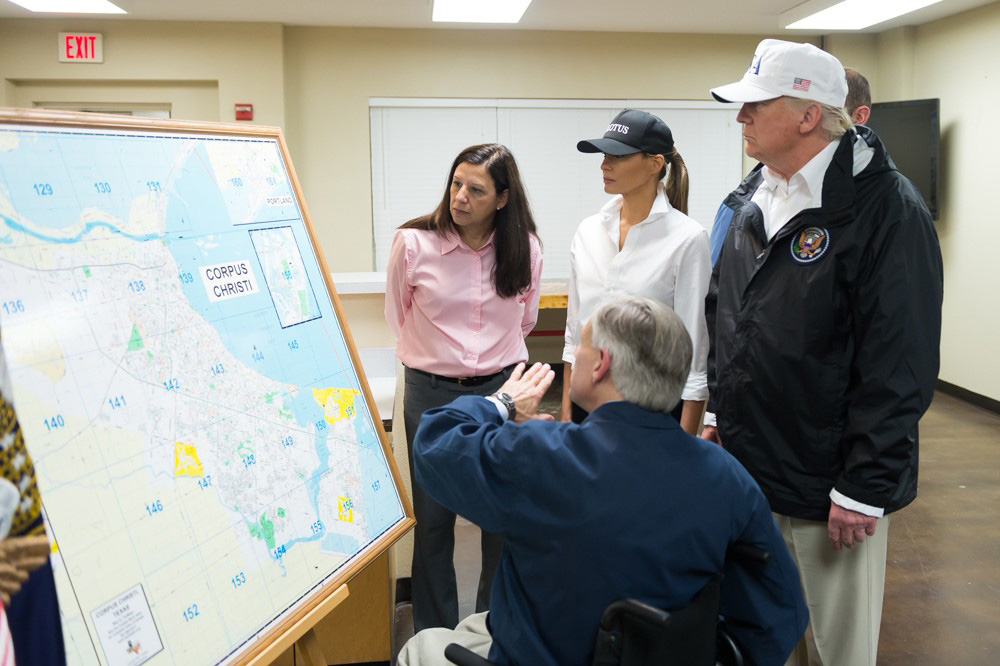 Vice President Mike Pence also visited Texas on Thursday, at one point hauling away debris and helping charity group Convoy of Hope distribute food. He announced that President Trump was donating $1 million of his own money to the recovery.

The federal response to the disaster was “A+” so far, but “we’ll need to maintain this,” said Abbott. “This is going to be a very long-term project, helping Texas dig out,” Abbott said.

Tom Bossert, White House homeland security adviser, said at a Thursday press briefing that the leaders of Canada and Mexico contacted the president to offer their condolences and help.

The U.S. Coast Guard in helicopters and citizen rescuers in boats and kayaks have helped save thousands of people throughout the week.

How much damage has the storm caused?

Bossert said Thursday that about 100,000 homes were damaged with varying degrees of insurance coverage. When asked about undocumented people’s access to federal financial aid, he said no one would be denied immediate food, water and shelter, but he couldn’t speak definitively on longer-term assistance.

AccuWeather projected that the total losses from the storm could reach $190 billion. Moody’s Analytics and others estimated the costs at between $81 billion and $108 billion. 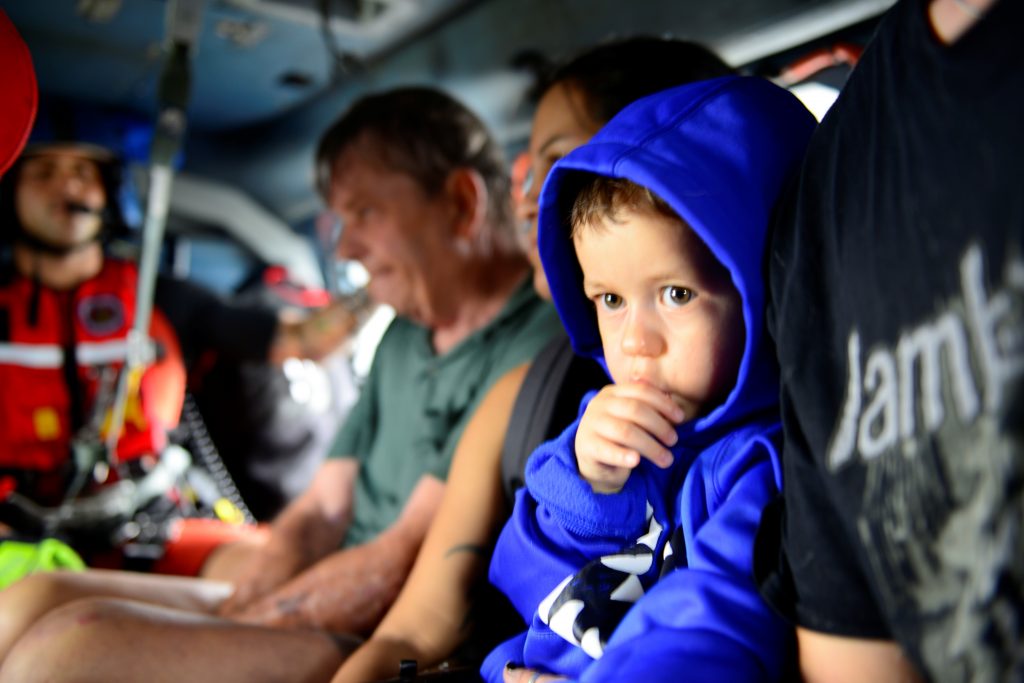 This is likely the worst storm Texas has ever seen, and it will take several years to recover, officials have said.

The first concern is making sure residents have food, water, shelter and medical care, said Abbott. Some evacuees will be moved to Dallas, Austin and San Antonio until the water recedes, and then, they will work with FEMA for housing, he said.

President Trump promised swift federal aid at a news conference Monday, saying the nation’s disaster fund of $3 billion is “sufficient for the immediate emergency but promised his administration will send lawmakers a request for far more,” the AP reported.

Left: David Gonzalez comforts his wife Kathy after being rescued from their home flooded by Tropical Storm Harvey in Orange, Texas, on Aug. 30. Photo by Jonathan Bachman/Reuters