LANCASTER, Pa. – As people debate allowing Syrian refugees to enter the United States, Farhan Al Qadri and his family are actually doing it.

The Al Qadris — Farhan, his wife Muna, and four of their nine children — moved to the United States in June. Their first glimpse of the U.S. was the inside of JFK Airport in New York, before they were shuttled to the farmlands of Lancaster, Pennsylvania, where they now live in a three-bedroom rowhouse in the heart of the city.

They are part of the fallout of a grueling nearly five-year civil war in Syria that has killed more than 200,000 people and forced millions from their homes.

The Al Qadris fled their hometown of Daraa in southwestern Syria with the few clothes they could carry after their house was caught in the crossfire between government and rebel forces.

Sitting on a flower-patterned sofa one afternoon in December, Farhan Al Qadri scrolled through photos on his phone showing the busted windows of his family’s whitewashed home in Syria, lamenting what they left behind that day in August 2012 when they had to cross the border into Jordan.

The family is safe now in Pennsylvania, but face a whole new set of challenges in a foreign land. He shakes his head at a water leak above the window in the kitchen, where his wife is making a huge batch of yogurt and fresh soup with onions and spinach for dinner. 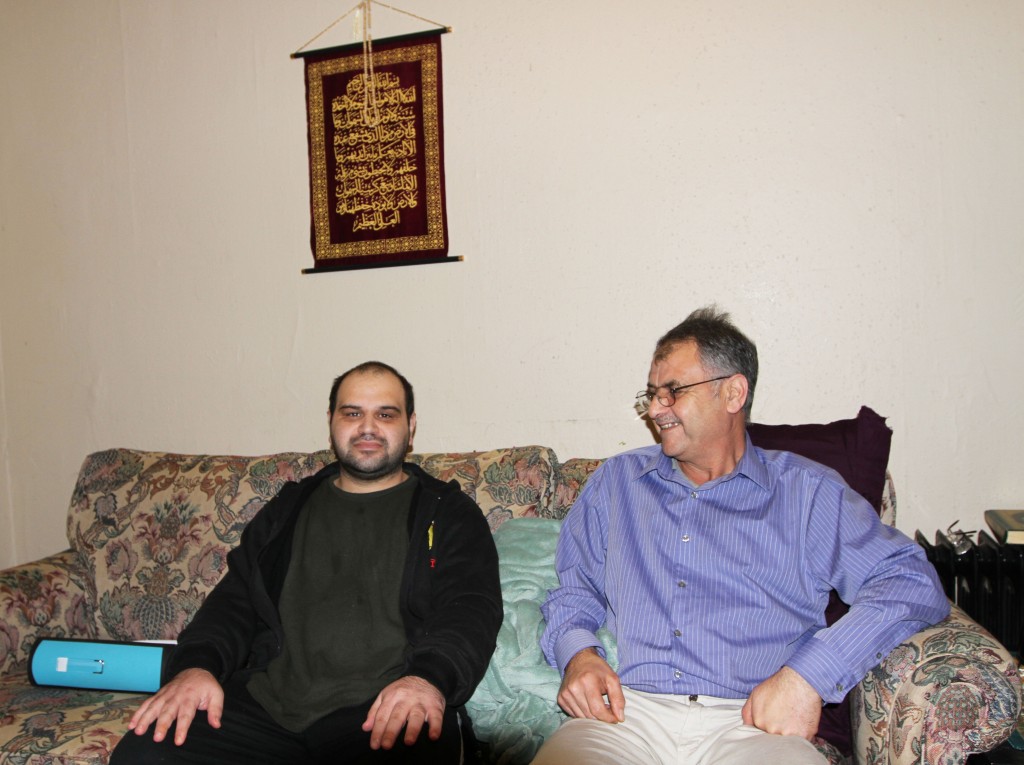 Syrian Farhan Al Qadri smiles at one of his sons at their home in downtown Lancaster, Pa. A tapestry with a verse from the Quran is one of the few wall-hangings. Photo by Larisa Epatko

He’s hoping to earn enough at his $10.50 per hour job washing equipment at an egg processing plant to eventually move into a nicer home, something closer to what his family was accustomed to in Syria. There, he owned a grocery store and an olive grove. But they hold no hopes of returning. “In Syria, it’s very bad now, lots of fighting,” he said in halting English.

Many of his friends have gone to Canada, which has promised to take in 25,000 Syrian refugees. “They help with money, a house and clothes. It’s good for Syrians,” he said. “But here now, it’s difficult, I don’t know about the U.S.A.” because of the current backlash.

“Some think Muslims are not good, and some Muslims aren’t good,” points out his teenage daughter, Maha. “But it’s the same with Americans. Some are good and some aren’t good.”

Maha, 18, who is learning how to drive and is a fan of Adele’s song “Hello,” is looking forward to attending college and possibly becoming a doctor. “Here, there is a future,” she said in the small bedroom she shares with her younger sister.

Last fall, President Barack Obama committed to accepting 10,000 Syrian refugees over the next year. But following the November terrorist attacks in Paris, more than two dozen U.S. governors said they wanted to halt the Syrians’ entry until they can review the refugee vetting process. Pennsylvania, not one of those states, has pledged to keep its doors open.

The Al Qadris were the first of three families to arrive this year in Lancaster, a city of about 60,000 people.

They underwent two years of security and health screenings. During that time, his 19-year-old son Ahmed turned 21. No longer a dependent, he will have to apply to come to the United States on his own. Four other children are grown and live elsewhere: two sons are in Germany, another in Kuwait and a married daughter lives in the United Arab Emirates. 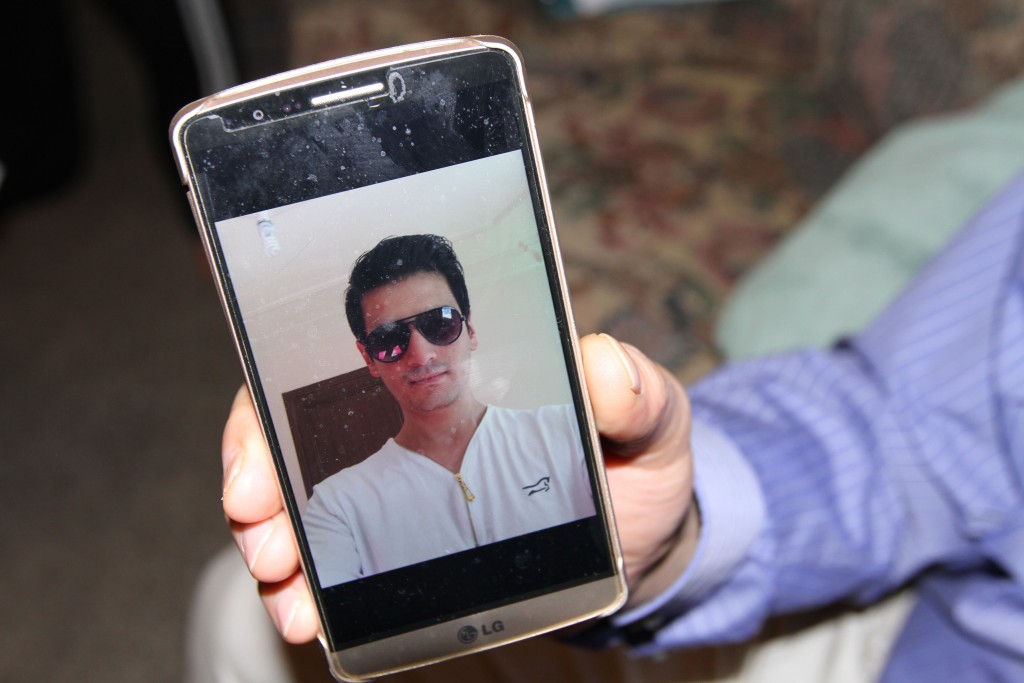 Farhan Al Qadri holds a picture of his 21-year-old son, who remains in Jordan and is waiting to come to America. Photo by Larisa Epatko

When families apply for refugee status from the United Nations, they go through a multi-level process to verify their identities, background and the threats they face at home. The United States requires another 13-step process for admission, including security clearances, in-person interviews and FBI fingerprinting.

The Syrian families are high priority because they involve children, said Stephanie Gromek, a community resource coordinator with Church World Service in Lancaster, one of the nonprofits that helps resettle immigrants. Still, the vetting process is long and involved, she said. Each family member undergoes the 13 checks and if any step expires before the process is completed, they must redo that portion.

The approved cases are then brought before nine U.S. resettlement agencies, and they determine which of the 360 U.S. cities that offer resettlement has the capacity to take the families, based on medical needs or other resources the city can provide.

Once the families are accepted somewhere, the International Organization for Migration is notified and coordinates their transportation. The family pays back the travel costs after they are settled and start acquiring income. 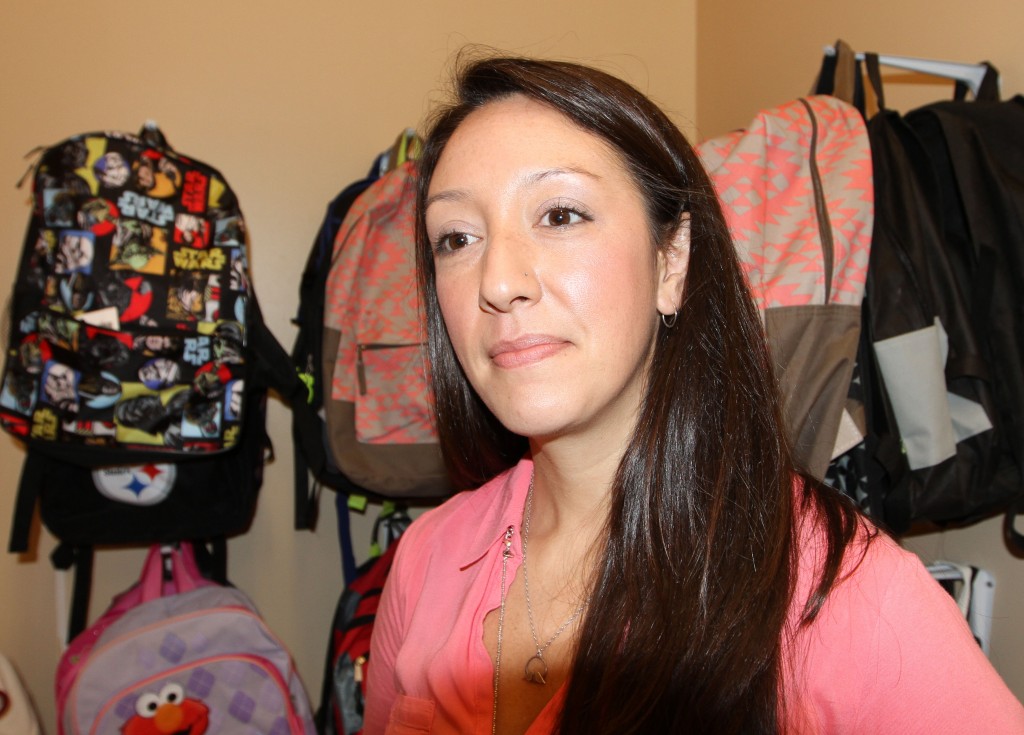 Stephanie Gromek works as a community resource coordinator for the Church World Service in Lancaster. Local residents have donated supplies, including backpacks, furniture and toiletries, for the refugees. Photo by Larisa Epatko

Each family is given four months of financial support, after which they are expected to become self-sufficient. The federal government provides about $1,000 per refugee, and the resettlement agencies use the money to help get them started in a home, stocked with household items – usually donated by the community – and offer help with applying for medical assistance and jobs.

Media coverage of the Syrian conflict has raised people’s awareness of the Syrians’ plight but also worries among Americans about their own safety, said Gromek. Church World Service seeks to address those concerns by meeting with various groups to educate them about the extensive vetting process.

It helps to explain even just the basics — that a refugee is a person legally in the U.S. who is eligible to work and start contributing to the community, she said.

Around the holidays, her organization launched a one-day fundraising campaign, which became a litmus test of sorts about the community’s support for the Syrians. The nonprofit hoped to raise $25,000 and ended up doubling its goal.

“It was just reaffirming that Lancaster is welcoming of refugees. They do stand behind what we’re doing,” Gromek said.

That’s partly because the city has a history of immigration, starting with the Amish and Mennonites for which the area is known. 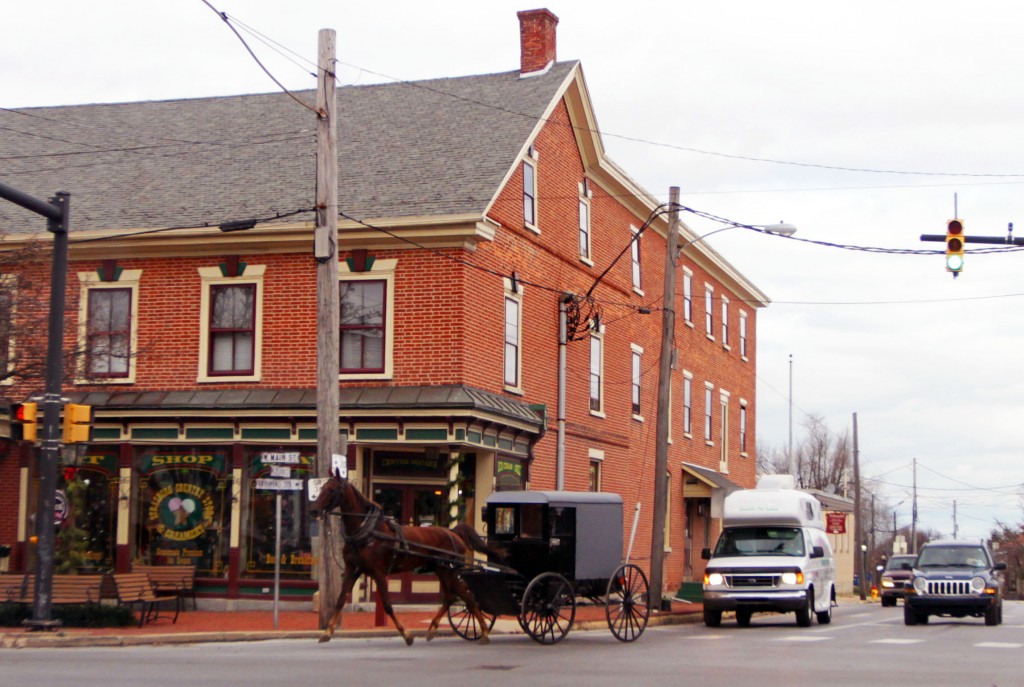 An Amish horse and buggy ride through town in Lancaster County. Photo by Larisa Epatko

Jon Carlson, pastor of the Forest Hills Mennonite Church in the Leola community of Lancaster County, said about 15 members of his congregation are helping a Syrian family of five school-aged children with household items, transportation to medical appointments, home visits and English language instruction. After seeing the images of the chaos in Syria, “to be able to do something tangible felt really exciting,” he said.

“It’s been so frustrating after the Paris attacks and the San Bernardino attacks to hear a lot of really uninformed rhetoric that we’re unable to vet these people and this is dangerous, when refugees are the most thoroughly screened group that come to this country,” Carlson said.

A sampling of comments on articles published by LancasterOnline shows the range of opinions on the newly arriving Syrians, from “keep them out of this country!” to “closing the doors is a cowardly response.”

“How about we take care of America first, our homeless veterans, starving children and jobless families before we give out free aid?” a commenter asked on the Church World Service’s Facebook page, expressing a commonly held view.

According to Carlson, it’s good to have such conversations when allocating and prioritizing resources. “But this is the largest refugee crisis since World War II and is a humanitarian crisis at an unbelievable scale,” so the U.S. as the world’s richest country has a responsibility to respond, he said.

“If you think more broadly about some of the root causes of extremism and violence, the things that we do as a country, the ways that we’re perceived globally, feed into some of those narratives,” he continued. “So if we’re perceived as being unconcerned about the plight of people living in the Middle East, that feeds into the sorts of narratives that become powerful recruiting tools for those looking to engage in extremism and violence.”

Writer Shawn Smucker, who lives in Lancaster with his wife and five children, believes that getting to know the refugees’ personal stories will help allay people’s fears. He’s written in his blog about a Palestinian refugee, who got in trouble at home for speaking out about women’s rights, and a man whose family arrived from Pakistan and is enjoying its newfound freedoms.

Lancaster accepts a few hundred refugees each year from more than a dozen countries, including Afghanistan, Iraq, Democratic Republic of Congo, Myanmar and Somalia, in addition to Syria.

Gromek said she can’t be sure the controversy over Syrians entering the U.S. is slowing the overseas processing, but her organization had expected to resettle more Syrians by the end of the year than the initial three families.

“I think people are so scared right now of what’s going on in Syria,” said Smucker. “Then, they hear people are coming from Syria and they think they’re going to bring that terror, but that’s just not the case.”

Being a Muslim in Lancaster

About 1,000 Muslims live in the greater Lancaster County region. The Islamic Community Center of Lancaster, which opened in 2013, provides them a place for Friday prayers, Quran studies, movie nights and “mommy and me” groups.

Its members are familiar with the possibility of misunderstanding and fear when it comes to Islam. 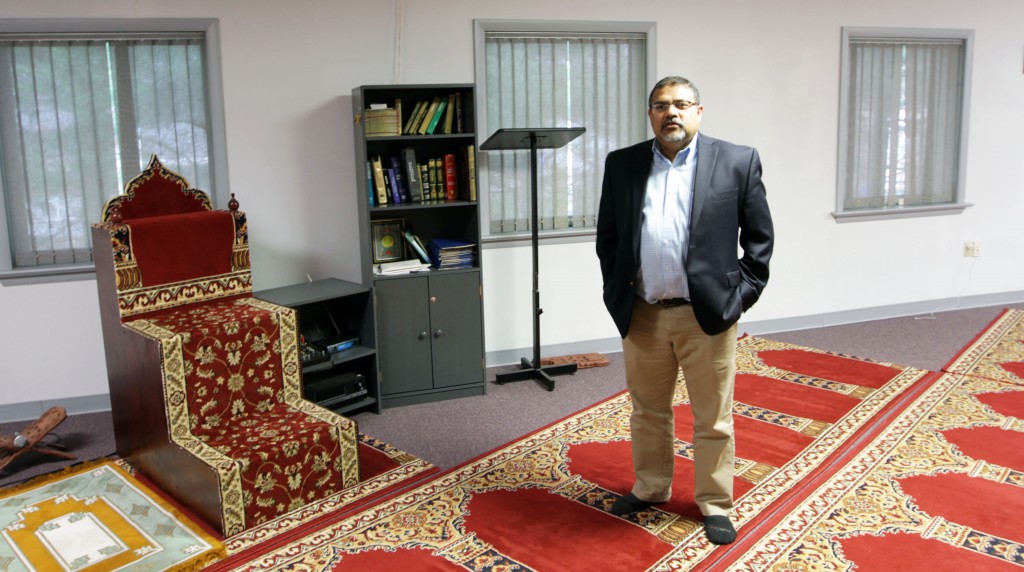 Prayer mats in the Islamic Community Center of Lancaster point toward Mecca in Saudi Arabia, Islam’s holiest city. Mukaram Syed says the center’s neighbors have offered their support and help in light of the anti-Muslim sentiment in some parts of the country. Photo by Larisa Epatko

Mukaram Syed, an engineer and volunteer member of the center’s Board of Trustees, spends a lot of his time educating others about Islam. The center’s members encourage school groups and others to the tour the site. Particularly after the most recent terrorist attacks, groups have asked the center to make presentations and answer their community’s questions.

“A lot of people don’t know that we believe in one God,” Syed said. “Sometimes, they’re confused about our beliefs.”

The local Muslims haven’t experienced hateful acts that some other cities have, in part because of their involvement in the community, said Syed. The center participates in backpack drives — supplying low-income children with school supplies, coat and blanket collections for refugees and charity runs.

Just in case, the center has security cameras and locked entrances. If there is any vandalism or violence, Syed said he believes outsiders would do it, not their neighbors.

“You have to be part of the fabric. The issues of Lancaster are my issues,” he said. “The work we are doing, we didn’t just start now when something bad happens in Paris. We’ve been doing this from day one.”

The center’s members also are in close contact with the resettled Syrian families.

Farhan Al Qadri happened to call Syed while a reporter was visiting the Islamic Center. He was seeking help transferring money to his son in Jordan. Despite living off food stamps, the father was still thinking of his son, who faces even more hardships, at least for now.

Left: Lancaster County in Pennsylvania, home of the Amish, is also home to a growing number of refugees from more than a dozen countries, including Iraq, Somalia and Syria. Photo by Larisa Epatko