When Syrian refugee Farhan Al Qadri arrived in Lancaster, Pennsylvania, in 2015, he didn’t know what life would bring. Two years later, he has a steady job and his family is doing well. But on one important matter — reuniting with his adult son, who is waiting in Jordan to come to the U.S. — things are more uncertain than ever.

Al Qadri said he had hoped that once his family members in the U.S. – his wife, two daughters and two sons – all got their green cards, they would be able to get Ahmed, who has been living in Jordan since the family escaped the fighting in Syria, to join them. But once they received their green cards, he learned it could still take years to reunite with his son.

“He’s a young man in his 20s and he wants to start his life, get married,” Al Qadri, still not 100 percent confident in his own English, recently said through an interpreter. “I don’t know if he can just sit and wait for years and years for something unknown, like whether we can bring him or not. I really don’t know what’s going to happen next.”

Neither does Maha, Al Qadri’s 19-year-old daughter. She is attending Harrisburg Community College on a scholarship and is studying to become a pharmacist. She’s also engaged to a Syrian man studying civil engineering in Jordan, who she met while her family was there undergoing screening to come to the U.S.

“I will get married this summer if I can travel (to Jordan). I am scared that I can’t, because I’m Syrian,” she said. Even with a green card, she’s worried she wouldn’t be able to get back into the U.S. because of a new executive order, and has no idea what her husband would do. In the meantime, “I talk to him every day.” About? “Everything,” she laughs.

Sheila Mastropietro, director of the Church World Service’s Immigration and Refugee Program in Lancaster, which helped resettle the Al Qadris, said one of the State Department’s priorities is to keep families together. Spouses, unmarried children under age 21, and parents of asylum-seekers and refugees can get priority in the resettlement program, once DNA confirms the relation.

She said refugees who have resettled in the area have been calling her office wondering what will become of their family members living abroad. “They’re scared. They’re asking about ‘my parents, my sister, my brother, are they going to come?’”

On Jan. 27, President Donald Trump signed an executive order putting a 120-day hold on the refugee resettlement program, including an indefinite hold on Syrian refugees. A federal judge in Washington state has stopped the ban for now. The Department of Justice is fighting the ruling. Oral arguments before a federal appeals panel are scheduled for Tuesday.

President Trump issued the executive order to protect American citizens and keep potential terrorists out of the U.S., he has said. According to the order, some countries, namely Iran, Iraq, Libya, Somalia, Sudan, Syria and Yemen, are not providing adequate information for screening purposes.

The seven named countries “in my view, don’t have the kind of law enforcement, records keeping … that can convince us that one of their citizens is indeed who that citizen says they are and what their background might be,” said Homeland Security Secretary John Kelly at a Jan. 31 press briefing.

Additional vetting measures could include looking up websites the applicants visit, telephone contact information to see who they’re talking to, and reviewing their social media accounts, said Kelly. “We are developing what additional vetting — extreme vetting — might look like,” he said.

Watch the full briefing with Kelly and other homeland and border security officials.

While opponents of the ban — who include former secretaries of state John Kerry and Madeleine Albright — say refugees already undergo a lengthy, intensive screening process, others contend that something more must be done with threats of terrorism at home and abroad on the rise.

A Gallup poll said 42 percent of Americans approved of a temporary ban for the seven named countries and 36 percent approved of indefinitely suspending the Syrian refugee program.

A Quinnipiac poll had a higher number, showing 48 percent of American voters support “suspending immigration from terror-prone regions, even if it means turning away refugees.”

“I think he’s going on the advisements of his military and the people that know best how to defend this country,” Childers said. “I think by him doing this will keep … us a little bit safer from people getting in the country and carrying out these attacks.

“Not all Muslims, but the Muslim extremists, they hate Americans, they hate Christians, and they just want to do us harm,” he said. By signing the order, “it gives [President Trump] time and the military time to strategize how we’re going to deal with these people that quite frankly just want to kill us.”

Childers said the mainstream media should report on radical Muslims but also what most Muslims are really like, just regular people, some of whom he met at his son’s basketball game. “Two of the boys were Muslim and they were two of the best players on the team,” he said. “I sat and talked to (one boy’s) dad during the game and told him how good his son was, and he was really proud of his son.”

Advocacy groups are trying to educate the public about who the refugees are, where they come from and why they left their homes.

“Once they have an opportunity to look and understand what goes into the vetting of refugees, they’ll have a much better understanding of who these refugees are,” said Erol Kekic, executive director of Church World Service’s Immigration and Refugee Program. 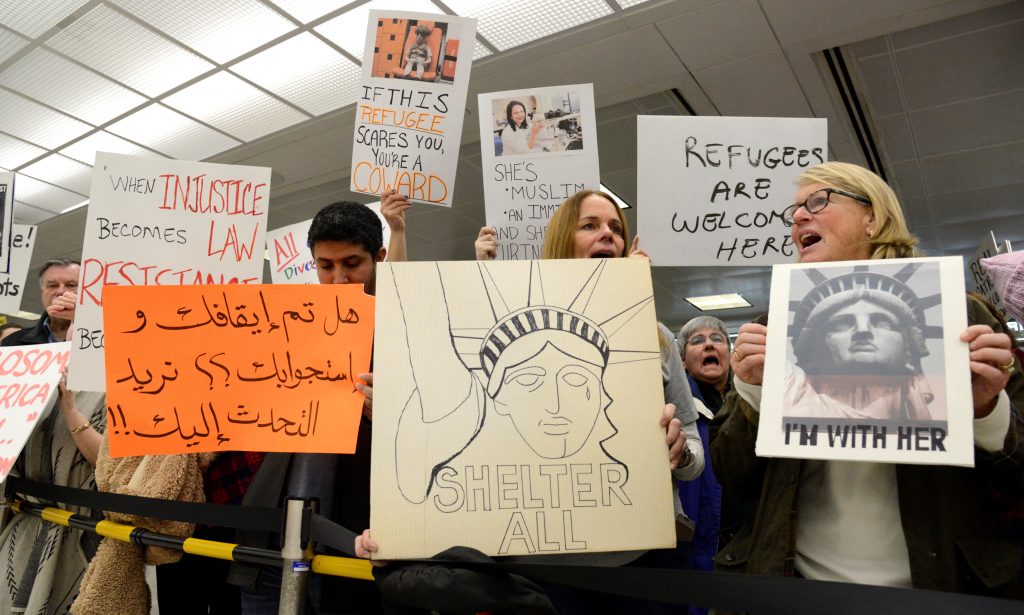 President Donald Trump’s executive order prompted spontaneous protests at airports, lawyers among the crowd offering free help. The sign in Arabic reads “Have you been stopped and questioned, we would like to talk to you, to assist with a lawyer.” Photo by Mike Theiler/Reuters

Church World Service, one of nine resettlement agencies in the U.S., started a campaign this year called Greater as 1 to introduce visitors to some of the refugees and provide options to help.

“We have seen a great deal of support coming forward saying, we do want refugees here, they make our nation better and we want to continue to be the one nation in the world that will lead by example,” said Kekic. “We want to harness that support of communities around the United States who are still standing in solidarity with refugees.”

Other online petitions and calls to action have cropped up as well, including an Evangelical-led campaign called We Welcome Refugees, an Amnesty International effort called No Refugee-Bashing in My Name, and an online petition signed by thousands of academics and dozens of Nobel laureates.

Maha Al Qadri said she feels terrible for the Iraqis, Yemenis and citizens from the other countries named in the temporary ban who are looking to come to the U.S. Without knowing first-hand, as she does, how welcoming Americans can be, “they must think, ‘people hate me’,” she said.

Left: If Farhan Al Qadri could bring his adult son to the U.S., what would he show him first? “I would show him the city of Lancaster; I would show him America,” he said. Photo by Larisa Epatko/PBS NewsHour