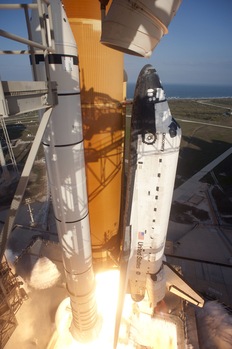 Discovery, the shuttle that flew the most missions at 39, including carrying the Hubble telescope into space, is headed for the Steven F. Udvar-Hazy Center in Chantilly, Va.

Atlantis, whose history includes flying the first mission to dock with the Russian space station Mir, is destined for the Kennedy Space Center Visitor Complex in Florida.

Endeavour, which Congress authorized as a replacement for Challenger, will go to the California Science Center in Los Angeles.

And the space shuttle prototype Enterprise, which never flew in space but was used to test different aspects of the shuttle program, will be delivered to the Intrepid Sea, Air and Space Museum in New York City.

Think you know the shuttles? Take our quick quiz:

#1. Atlantis took half the time to build than Columbia, the first shuttle. Why did it take so much less time?

#2. What was Discovery’s namesake?

D) All of the above

#3. Endeavour received some major upgrades over its operational life. What was one of the most significant?

#4. Where is Enterprise now?

Answer to #1: In addition to the lessons NASA learned from building previous shuttles, Atlantis was equipped with thermal protective blankets on the upper body, rather than individual tiles that required more attention.

Answer to #2.: D) All of the above. It’s a tradition to name the shuttles after seafaring research vessels, and Discovery has the longest list. Enterprise was the only shuttle named after a starship (from the television show Star Trek).

Answer to #3: Endeavour was the first shuttle to use a 40-foot-wide drag chute to help slow the orbiter during landing. Endeavour will use this landing device again at the close of its next mission, scheduled for liftoff on April 29 at 3:47 p.m.

Answer to #4: Enterprise currently resides at the Udvar-Hazy Center but will be moved to make way for Discovery.