Across borders, Syrian women gain strength from each other

Syrian-born Maria Alabdeh was studying microbiology in France in 2011 when the Syrian revolution ignited.

“I was amazed by the youth going to demonstrate” against the government in Damascus, she said recently during a visit to the U.S. “I was so scared watching them chanting,” she said, potentially exposing themselves to retribution by the regime. “Anyone could be arrested or killed.”

She also was deeply concerned about the women living in the battle-torn country. Men were leaving their homes to fight or to try to make a living elsewhere, and women and children were finding they needed to fend for themselves.

Maria Alabdeh, trained as a professor of microbiology, runs Women Now for Development, a women’s empowerment organization in Paris that helps Syrians in besieged areas. Photo by Larisa Epatko/PBS NewsHour

To help — at least from afar, Alabdeh joined forces with an organization based in Paris, called Women Now for Development, started in 2012 by Syrian writer Samar Yazbek.

The nonprofit helps teach Syrian women to read and write, and offers them vocational training, such as sewing, knitting, secretarial work, first aid and hair-cutting to enable them to earn a living. It also provides education on computers and how to get involved in politics.

“We are trying to have a safe place for women to discuss change and make change in their country,” said Alabdeh, who is executive director of the group. Many of the women are eager to learn English, so that they can read articles and write them, she said.

The classes are taught by local instructors in northern Syria and refugee camps in Lebanon. Since its inception, the organization has grown into eight women’s centers — six in Syria and two in the Lebanese refugee camps — staffed by more than 100 women teachers and activists.

The group adjusts its courses based on the requests of the women, such as adding a self-defense class, and provides counseling for their shattered nerves.

Women come from miles around just to learn, said Alabdeh. “Even the girls are happy because in some areas, the women’s center is the only place where they can be together since no stores are open.”

They can learn about what’s happening outside of their neighborhoods and become engaged in the broader community, she said. “It’s a solidarity movement — and helps keep hope about Syria.” 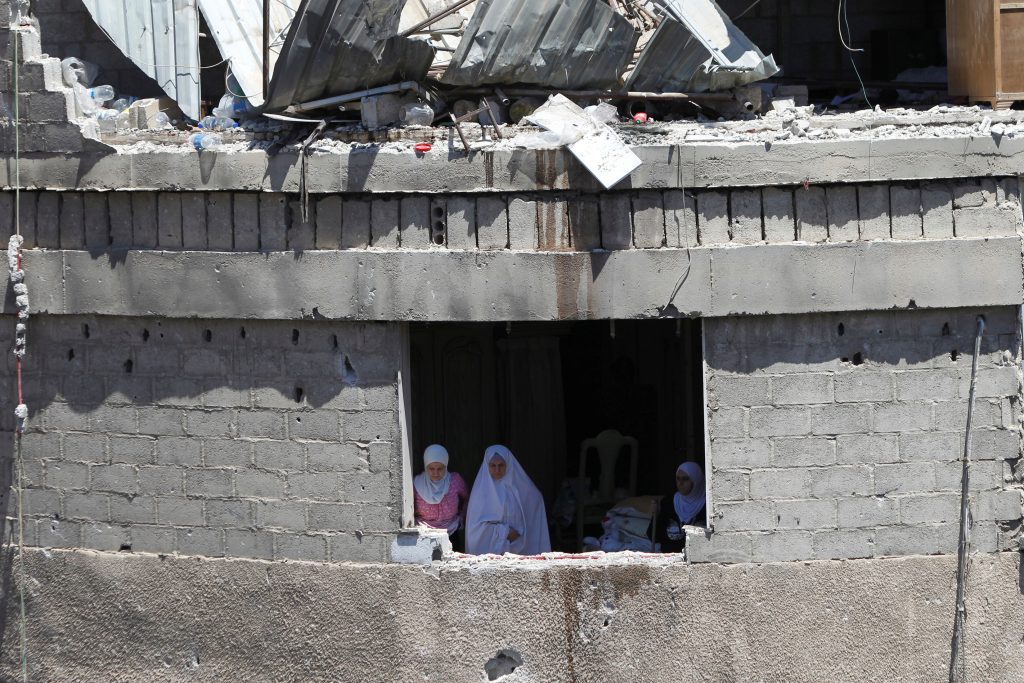 Women inspect the damages from a suicide and car bomb attack in a southern Damascus suburb in Syria on June 11, 2016. Photo by Omar Sanadiki/Reuters

Women Now for Development also seeks to address basic food needs. For example, it helped finance eight milking cows to go to eight families in the town of Jabal al Zawyah in northern Syria. It also gave plots of land to three Syrian women who fled to Lebanon’s eastern Bekaa Valley, so they could grow wheat, tomatoes and lettuce.

Alabdeh said despite the constant stress, her colleagues in Syria manage to keep their sense of humor. Once, while she was speaking to an instructor in Syria via Skype early in the morning, the thunder of an airstrike in the background interrupted their conversation.

The instructor joked, “The pilot must not have had his coffee today,” Alabdeh recalled, and it made her laugh.

Left: An instructor teaches Syrian refugees in Lebanon about how they can get involved in politics. Photo courtesy of Women Now for Development