What moving the U.S. Embassy to Jerusalem means for Israeli-Palestinian peace talks

The U.S. Embassy will open in Jerusalem on Monday, in what President Donald Trump called a “long overdue step to advance the peace process” when he announced the embassy’s relocation from Tel Aviv in December.

It was both a political move, fulfilling one of the president’s campaign promises, and a symbolic one marking the United States’ official recognition of Jerusalem as Israel’s capital.

It also was controversial; while Israeli Prime Minister Benjamin Netanyahu hailed it as a “great day for the people of Israel,” Palestinian Authority President Mahmoud Abbas said it proved the U.S. could no longer be a neutral broker in any peace negotiation.

Palestinians assert that the eastern portion of Jerusalem will be the capital of their future state. Israel captured and annexed East Jerusalem from Jordan after the 1967 Middle East war.

We asked experts what to expect from Monday’s ribbon-cutting and what the opening will mean for the U.S. relationship with Israel and the region.

Who will be there on Monday?

Deputy Secretary of State John Sullivan is leading the U.S. delegation, which includes:

Protests at the Gaza border — demanding the return of Palestinian refugees — are planned for one more day after Monday’s ceremony. “I wouldn’t be surprised if the American delegation hightails it out of town on the night of the 14th,” so if protests escalate the following day, “ they are not in Israel for it,” said Tamara Wittes, former deputy assistant secretary of state for Near Eastern affairs. 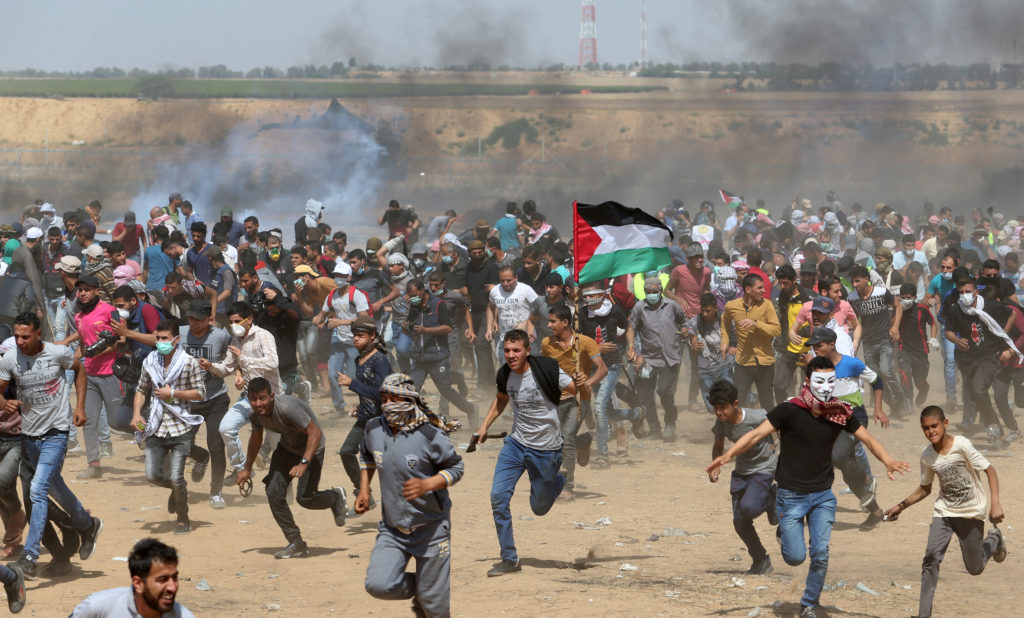 Palestinian demonstrators run from tear gas fired by Israeli forces during a protest demanding the right to return to their homeland, at the Israel-Gaza border in the southern Gaza Strip on May 11. Photo by Ibraheem Abu Mustafa/Reuters

If thousands more Palestinians join existing demonstrations, including the one at the Gaza border where at least 40 Palestinians have been killed and 5,000 wounded, there could be more casualties, said Shibley Telhami, a professor of government and politics at the University of Maryland. The ribbon cutting is occurring on the 70th anniversary of Israel’s declaration of independence.

“I’m sure there are actors that would love to take advantage of the tension around this for their own purposes, but there’s plenty of tinder in the tinderbox already,” Wittes said.

“Security will be very, very tight” with an American delegation present near the West Bank, “so we may not see events really sort of spiraling out of control necessarily on the day of the move, or even the day after,” said Natan Sachs, director of the Brookings Institution’s Center for Middle East Policy. But the issues roiling Palestinians are not going away, including poor living conditions in Gaza made worse by pressure on Hamas from Abbas and cuts in U.S. funding to the U.N. agency for Palestinian refugees, he added.

What changes will the relocation bring?

The new embassy will initially be located in the current U.S. consulate in Jerusalem while the government looks for a permanent site.

By announcing the move, Trump was “acknowledging the reality that Jerusalem has been Israel’s capital since 1949” and that Israelis and Palestinians must resolve their respective claims, including contested borders, among themselves, wrote David Makovsky and Dennis Ross for the Washington Institute for Near East Policy.

“You have the loss of a diplomatic channel both physically and verbally.”

The move will not, however, prevent a Palestinian capital in East Jerusalem or change the fact that the two parties will need to negotiate the status of Jerusalem as part of resolving the Israeli-Palestinian conflict, Wittes said. Still, it does mark a shift in America’s relationship with the Palestinians, she said.

Since the signing of the Oslo Accords, the U.S. consulate in Jerusalem acted as an independent mission representing the U.S. government to the Palestinian Authority. Now that the embassy is moving there, it will serve all Israelis and Palestinians. “That’s a big change,” Wittes said, especially with the Palestinian Authority and Palestine Liberation Organization boycotting engagement with American diplomats. “You have the loss of a diplomatic channel both physically and verbally.”

No one in the Arab world liked the decision, but it’s “not a priority issue for most people,” Telhami said. “They’re preoccupied with so many other issues coming out of the Arab uprisings and Iran,” he said. Arab leaders, such as in Saudi Arabia and Egypt, are downplaying the decision because they want to continue working with the Trump administration, he noted.

Can the move be reversed? It’s hard to see how that would work, Telhami said. “Remember that overwhelmingly Congress supports it.” But a future president could still declare support for East Jerusalem as the capital of Palestine or place another American Embassy there.

How does this change the U.S. role in the peace process?

At one time, Trump was touting an “ultimate deal” — an agreement between Israel and the Palestinians — led by Kushner during his first year in office.

“Five years from now, we’ll look back and see that this decision represented the last nail of the many nails that have been put in the coffin of the peace process.”

“Five years from now, we’ll look back and see that this decision represented the last nail of the many nails that have been put in the coffin of the peace process,” said Martin Indyk, a former U.S. special envoy for the Israeli-Palestinian negotiations and U.S. ambassador to Israel from 1995 to 1997 and 2000 to 2001.

The embassy move has given Abbas the “perfect excuse for avoiding an American peace process that he sees, I think accurately, as likely to undermine all Palestinian claims, not just in Jerusalem, but across the territories as well,” Indyk said. “And I believe that he will essentially sit it out, but not seek to inflame the situation.”

“I don’t see the Palestinians returning to a peace process,” at least one led by Americans, after the embassy moves, said Khaled Elgindy, who served as an adviser to the Palestinian leadership in Ramallah on negotiations with Israel from 2004 to 2009. “Jerusalem is the core issue, I think, for both sides and the one that Palestinians had pinned most of their hopes on. A Palestinian state without a capital in Jerusalem would be I think in the view of most Palestinians not a state worth having.”

Left: The compound of the U.S. consulate in Jerusalem will host the new U.S. Embassy. Photo by Thomas Coex/AFP/Getty Images