What can we learn from Russia’s military drills?

Amid icy relations with the U.S., Russia launched joint military exercises with Belarus on Thursday in what outsiders are hoping provide clues to Russia’s current firepower and agility.

What are these war games?

Russia holds large-scale exercises every four years — since 1999, which rotate through four operational strategic commands of the Russian Armed Forces (Western, Eastern, Caucus and Central). This year’s exercises, called Zapad (“West”) 2017, are the first since Russia annexed the Crimea in 2014.

Russia and Belarus plan to practice amassing troops in a scenario that pits them against terrorists infiltrating their borders from three different countries.

What messages do the drills send?

Peter Zwack, a senior research fellow at National Defense University, said at a Tuesday briefing at the Center for the National Interest that the main message the exercises send is one of deterrence, and that Russia would point to NATO doing its own exercises nearby as a reason for practicing its defenses.

Michael Kofman with the Center for Naval Analyses said at the briefing that the joint exercises will not only show the nuts and bolts of Russia’s troop placement, but also Russia’s ability to intervene on Belarus’ behalf if it is threatened. Belarus, where many of the drills are taking place, borders three Baltic states and NATO allies: Poland, Lithuania and Latvia.

Russia, which has the most nuclear warheads in the world, is now working to build up its conventional weapons capabilities to match the U.S., Kofman said. “They still have a way to go, but they learn fast,” he said. 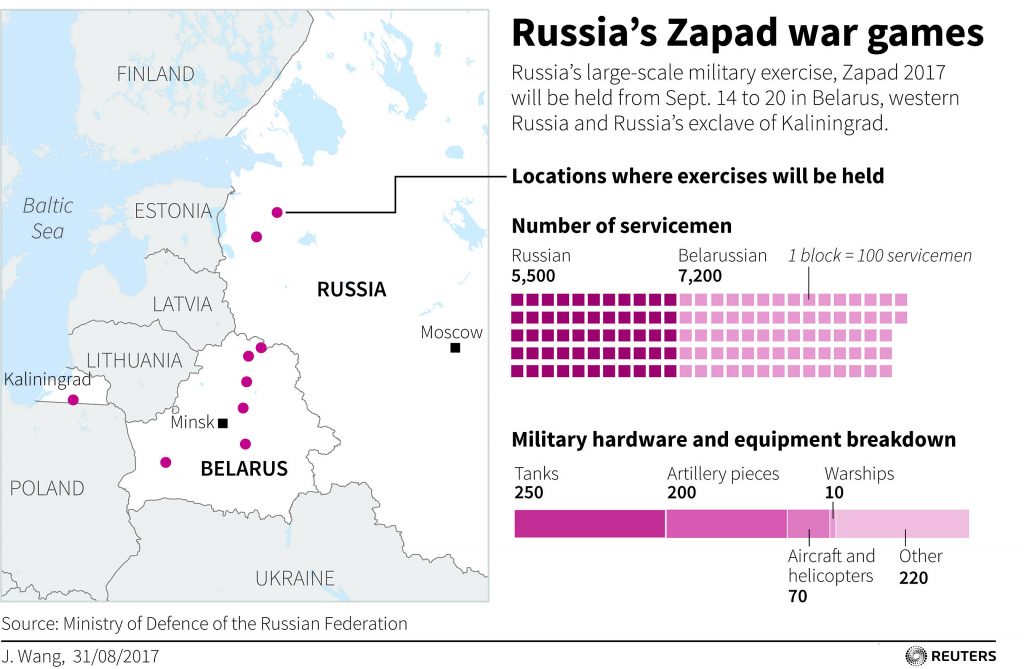 How many troops are participating?

Russian officials say under 13,000 troops are taking part in the war games, which take place between Sept. 14 and 20. NATO officials say the 13,000 declared cap means Russia will not need inspectors or observers. But some Western analysts say the number is more like 100,000 when you consider the other personnel involved.

U.S. Army Lt. Gen. Ben Hodges, who leads U.S. Army forces in Europe, told Reuters that “people are worried this is a Trojan horse. They say, ‘We’re just doing an exercise,’ and then all of a sudden they’ve moved all these people and capabilities somewhere.” He added that he had no indications that Russia is planning such a move.

Moscow officials said the exercises are in no way intended to stage attacks on other places and that the West was “whipping up hysteria” over the drills, Reuters reported. “We reject complaints of these exercises not being transparent,” said Kremlin spokesman Dmitry Peskov.

Sweden, meanwhile, is holding its own three-week military exercises in the Baltic Sea with 20,000 troops, including 1,000 U.S. soldiers. Neither Sweden nor Russia are members of NATO.

“Russia is the country that affects security in Europe right now with its actions – the annexation of the Crimea and continued battles in eastern Ukraine – so it is clear that we are watching very closely what Russia is doing,” Commander of the Swedish Armed Forces Micael Byden said, as reported by Reuters.

President Vladimir Putin is intending to observe some of the wargame areas next week. His counterpart, Belarus’ President Alexander Lukashenko is an ally of Russia, Zwack said, “but a prickly one.”