Once a superpower, how strong is Russia now?

Not since the end of the Cold War has Russia dominated U.S. headlines to the degree we’ve seen during this election. According to U.S. intelligence services, Russian President Vladimir Putin is waging a silent, global war against liberal democracy. President Barack Obama recently derided Russia as a “smaller,” “weaker” nation. But according to President-elect Donald Trump and some of his Cabinet designees, friendlier relations with Moscow could benefit the U.S.

Is Russia a growing threat to be feared, or a valuable potential partner to embrace? We look at how Russia stacks up against the U.S. and another rival economic power, China.

When Putin came to power in 1999, he promised to end the chaos under Boris Yeltsin’s leadership — which critics said was marked by corruption and political upheaval — and help improve the quality of people’s lives. In return, Putin said he expected Russians to let him do as he pleased in politics. 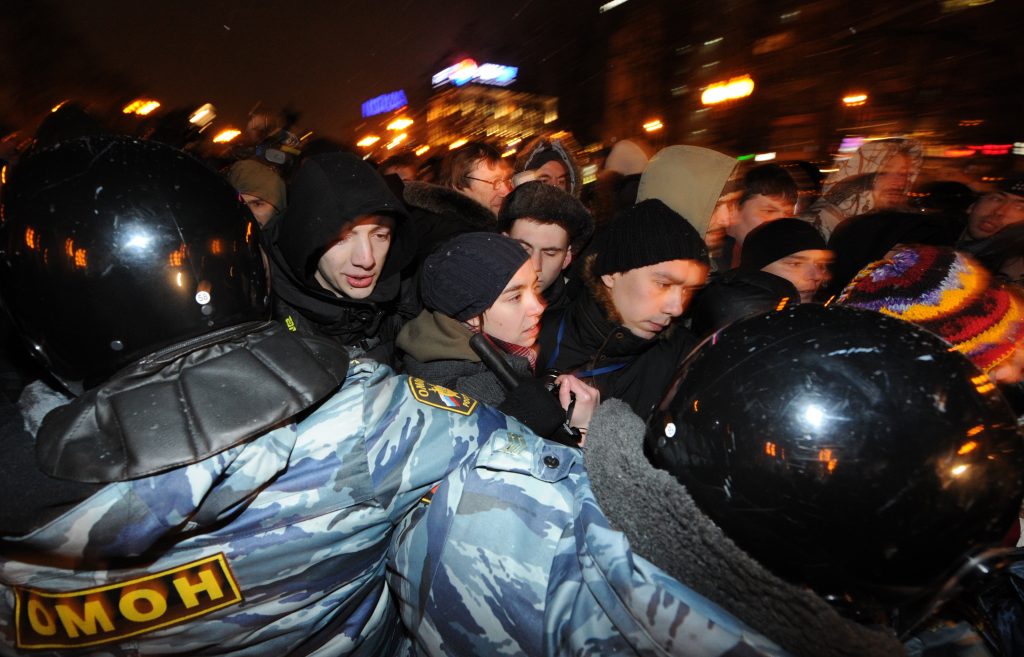 Amid street protests in 2012 over accusations of voter fraud in legislative elections, Vladimir Putin announced his campaign for a second stint as president and his efforts to make Russia strong again. Photo by Alexander Nemenov/AFP/Getty Images

For the past 20 years, life for most Russians did improve. “People were able to take vacations abroad in Turkey or Egypt or the Czech Republic. They were able to send their children to university, sometimes even outside the country. They could remodel their kitchens and put in modern European appliances,” said Hannah Thoburn, a research fellow at the Hudson Institute in Washington, D.C.

The improvement is most notable in larger cities compared to the countryside, where poverty is still a major problem in some regions, said Thoburn. “Some of the villages look like they’re from 200 years ago, while in Moscow you feel as though the world is spinning around you, and there are huge skyscrapers and fancy cars.”

“What Russians are getting in exchange for that lower life expectancy is a Russia that’s far more assertive on the international stage. It might seem a little strange to Americans, but a lot of Russians really regret the fall of the Soviet Union” and the glory it once had, said Thoburn. “This is something else that Putin is giving them, and I think it doesn’t necessarily matter to them that they lose a few hundred rubles out of their pocket every month. They’re willing to make those sacrifices for the good of Russia.”

Life expectancy, which was woefully low, started to go up in the years since the breakup of the Soviet Union, though it still ranks far lower than most Western countries, she said.

LIFE EXPECTANCY | Before the Soviet Union fell in December 1991, the average Soviet citizen could expect to live to age 69. Just two years later and minus Soviet bloc countries, Russia’s life expectancy dropped to 64.5 years, according to data analysis from the World Bank. By 2014, Russians live longer on average — 70 years — but that was nearly a decade shorter than the average American’s 2014 life expectancy — 79 years.

Russia’s economy is roughly the size of Italy or Canada, and is dependent on oil revenues to stay afloat, said Thoburn. Western countries, including the United States, placed sanctions on Russia when it annexed Crimea, and intervened in Ukraine and Syria. At about the same time, Russia — one of the world’s top two oil producers — saw oil prices plummet from a high of $100 per barrel to about $40 per barrel. Despite a slight improvement in oil prices these days, Russia’s economy took a beating and it is still working to climb out of a recession.

Russia’s economy is expected to improve starting in early 2017, said Yale University’s Christopher Miller, who wrote “The Struggle to Save the Soviet Economy: Mikhail Gorbachev and the Collapse of the USSR”. The International Monetary Fund and World Bank are estimating that Russia’s GDP will grow by 1 or 2 percent over 2017 thanks to a turnaround in the domestic economy and in energy prices, and increasing oil production, he said.

How about the entrepreneurial climate? During Soviet times, Russia was known for its science prowess, and it still has many creative technologists and computer engineers today, said Thoburn. But the demands placed on entrepreneurs by the government tend to suppress new businesses, she said.

Pavel Durov, founder of VKontakte or “InContact” — the Russian version of Facebook — experienced it firsthand, said Thoburn. During the protests, some people were using the social media website to arrange meetings and talk about the opposition. The government asked Durov for information about the users, but he refused and ended up selling the company. Western firms are reluctant to invest in Russian technology startups, because they’re not sure if the companies can maintain control of their own data, she said.

Government control sometimes dissuades not only foreign investors, but wealthy Russians as well, who see it as risky to create new businesses, said Miller. “They’re afraid that whatever they build or whatever they own is going to be taken by the government under trumped-up pretenses.”

GDP RANK | The United States ranked first in the world for gross domestic product, according to 2015 estimates from the World Bank. China ranked second with Russia in 13th place.

INFLATION | Russian consumers enjoy far better prices today than they did after the fall of the Soviet Union, when price inflation skyrocketed nearly 900 percent. Since then, inflation in Russia improved greatly but remains higher than what’s found in the United States and China, according to International Monetary Fund data.

JOBLESS | Russia’s story of economic recovery reveals gains in getting the nation’s workforce to work, according to World Bank analysis of data from the International Labor Organization. Unemployment last spiked at 13.3 percent in 1998, but has since tapered. By 2014, Russia’s jobless rate was better than what Americans reported that same year.

PETROLEUM PRODUCTION | A cornerstone of Russia’s economy is fossil fuel production. But according to recent estimates from the U.S. Energy Information Administration, the United States edged Russian barrel-per-day production of petroleum and other fossil fuel liquids.

ECONOMIC COMPLEXITY | Russia’s economy is less diverse than the United States, according to an economic complexity index produced by the Observatory of Economic Complexity, a part of Massachusetts Institute of Technology’s Media Lab.

In terms of military prowess, Russia is trying to rebuild itself. After the five-day war with Georgia in 2008, the weaknesses in the Russian military were exposed, said Thoburn. Since then, the Russian military has undergone an overhaul to make its army more professional and modern, and replace its old equipment that languished after its Soviet days. 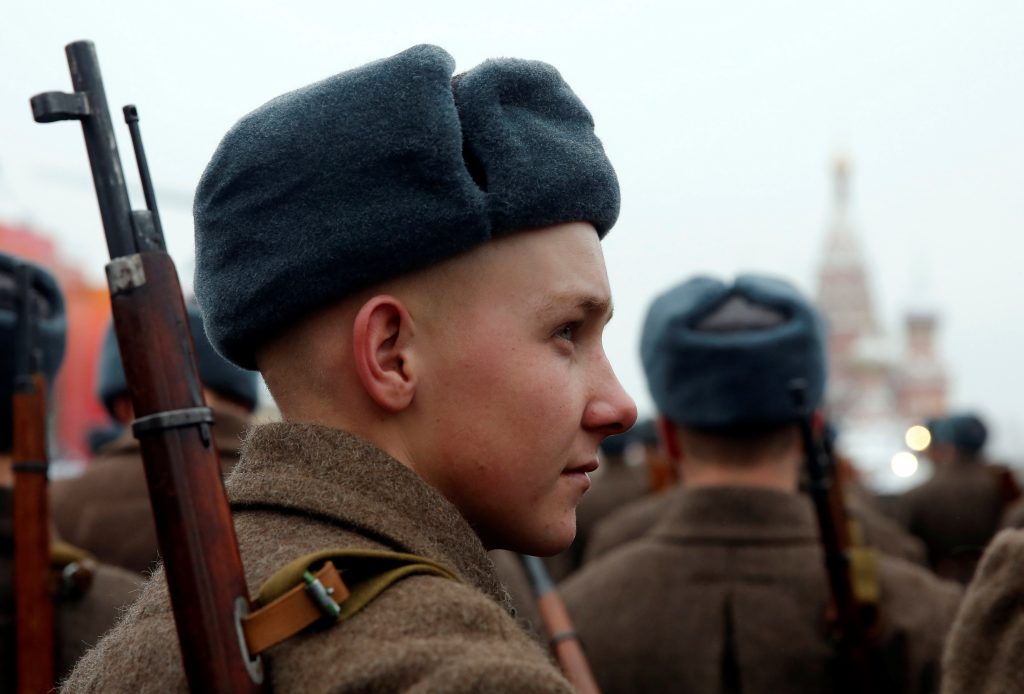 Servicemen dressed in historical uniforms mark the anniversary of the 1941 parade when Soviet soldiers marched toward the front lines of World War II. Photo by Maxim Shemetov/Reuters

Russia is first in the world in the number of nuclear weapons and it has advanced missile systems. But in broader terms, its military “is a shadow of what it was during the 1960s,” Thoburn said. Its one aircraft carrier was recently deployed to Syria, which drew more attention for its belching smoke than its military might.

NUCLEAR WARHEADS | Together, Russia and the United States hold 93 percent of the world’s nuclear warheads. Earlier this week, the Federation of American Scientists released these estimates that tallied retired, stockpiled and deployed nuclear warhead inventories around the globe. By comparison, the nation with the third-largest inventory — France — represents a fraction of U.S. or Russian nuclear arsenal.

Russia’s intelligence services are one of the few things that did not undergo serious degradation after the Soviet Union, though it did undergo a major restructuring, said Thoburn. Many people left the secret services, including Putin, when the Soviet Union fell, but they have maintained their contacts and tradecraft. The agencies’ advocates in the Kremlin know what can be achieved with intelligence, and they continue to use it similar to the ‘70s and ‘80s, she said.

When Russia’s well-known writers, including Leo Tolstoy, Fyodor Dostoyevsky, Alexander Pushkin and Anton Chekhov, crafted their masterpieces during the 19th century, most Russians couldn’t read them. After the Bolsheviks seized power in the 1917 revolution, and brought Communist rule, they insisted on a literacy campaign so people could read in the newspapers what the politburo was doing for them, said Thoburn.

Now, in terms of literacy, Russia ranks slightly higher than the United States, according to the CIA World Factbook. And Russians continue to revere their writers, naming metro stations after the literary greats and allowing riders to access a virtual library of works as they make their daily commute. 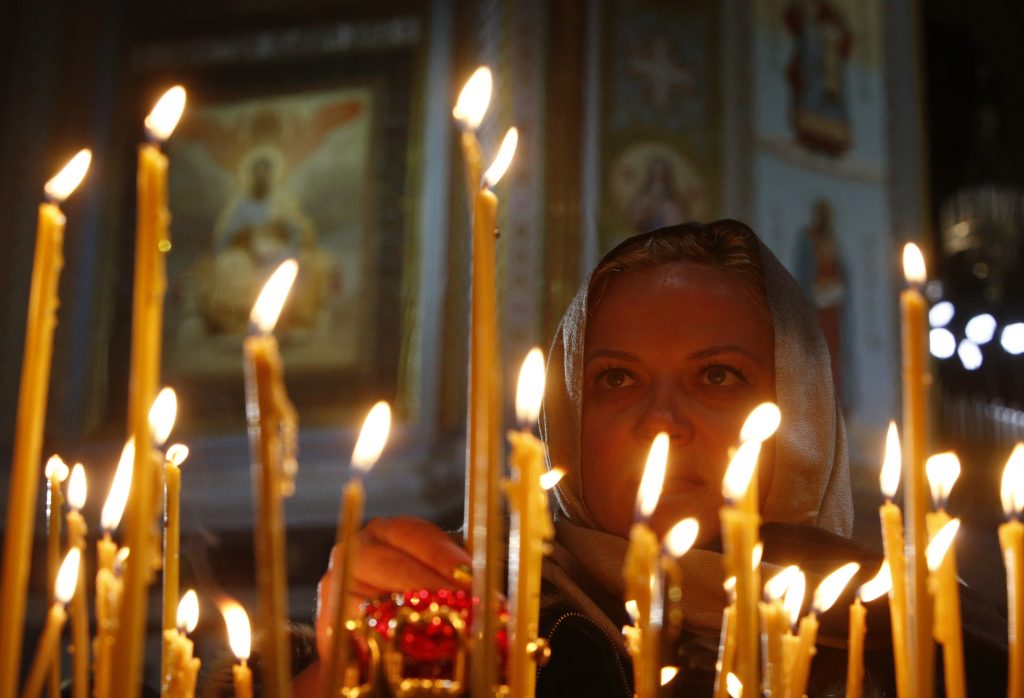 A woman lights a candle before a service on the eve of Orthodox Christmas at a cathedral in Moscow on Jan. 6. Photo by Sergei Karpukhin/Reuters

Looking ahead to relations with the U.S.

U.S.-Russian relations got chilly under the Obama administration, but President-elect Donald Trump has made some positive overtures. Putin and Trump are similar, personality-wise, which could help starting out, but hurt down the line, said Thoburn. “It seems possible that after a period of hugs and kisses and love all around, that one or the other will feel he’s been disrespected by the other and relations will suddenly go downhill.”

One of the questions surrounding a Trump presidency is how he will handle sanctions on Russia. “It will be interesting to see if he chooses to unilaterally remove them or keep them in his pocket as a bargaining chip,” she said.

The PBS NewsHour’s Laura Santhanam and Megan Crigger created the charts and graphics.