Next to the airport in Bangui, the capital of the Central African Republic, a makeshift tent camp is crammed with tens of thousands of people who have fled the deadly clashes between Muslims and Christians that have persisted since a 2013 coup.

But the U.N. World Food Program, which operates in war-torn nations such as Syria, can’t distribute food within the camp because it’s too dangerous, said Ertharin Cousin, executive director of the World Food Program. She recently returned from a week-long visit to the Central African Republic and could see the camp from her airplane window.

Some of the people who live there, including armed fighters involved in the country’s conflict, get violent when food, water or anything marketable arrives, Cousin explained, so it’s too risky for the residents and the aid workers. “When we go into those kinds of areas, we make ourselves prey for those who are participating in the conflict.

“These are people who are living in a very desperate situation,” she continued. “It’s an example of how desperate the conditions are for those who have been the victims of this conflict.”

The cycle of violence in the Central African Republic began when rebel groups called the Seleka overthrew the government in March 2013 and installed their own leader as president: Michel Djotodia, a Muslim in a predominantly Christian country. Seleka fighters embarked on a campaign of violence toward Christians they deemed supportive of the deposed president.

Christian militias — called Anti-balaka, meaning “machete-proof” or “invincible” — formed in order to protect the Christian population from the rebels’ attacks.

Djotodia resigned under pressure from other African leaders in January, and interim President Catherine Samba-Panza took his place.

But the fighting continued, as Christian militiamen gained the upper hand and unleashed retaliatory attacks against Muslims. 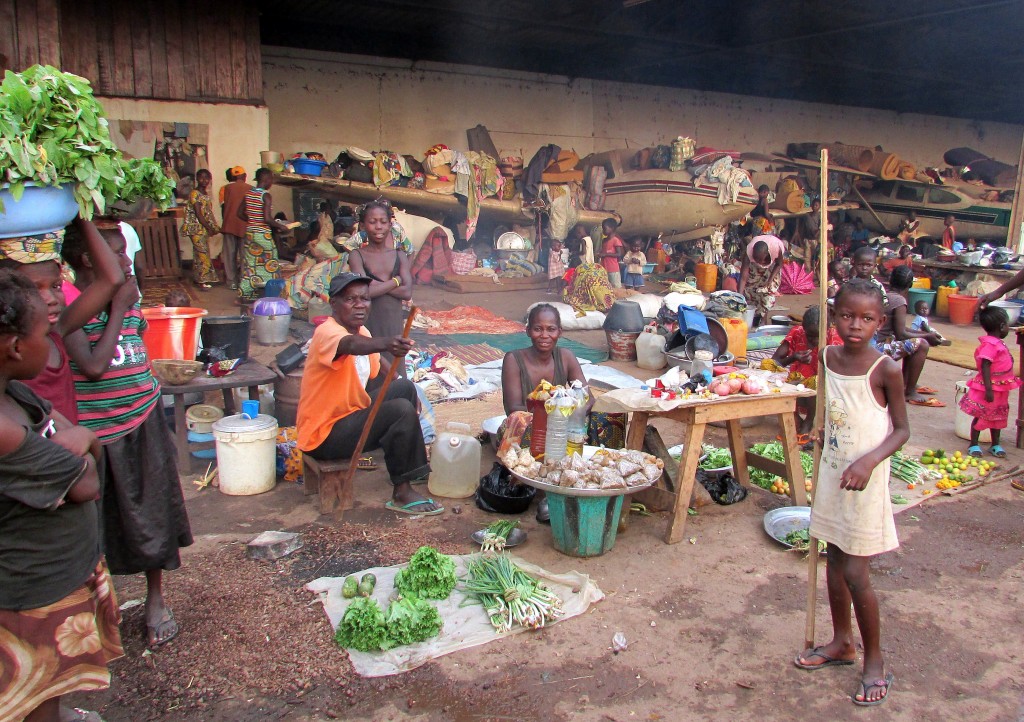 People sell goods inside a camp next to Bangui’s airport in the Central African Republic on March 18, 2014. Photo by Pacome Pabamdji/AFP/Getty Images

An estimated 800,000 people in the country of 5 million have fled to neighboring nations or rural parts of the Central African Republic and the World Food Program is now trying to reach them.

“To date, we have fed over 400,000 people and we know that we need to increase that to 1 million people by the time the rains come and what is more the traditional hunger season in CAR,” said Cousin.

Her organization is in a race against time to stockpile food at distribution sites before the rainy season begins in May and cuts off access to certain areas. “If there ever was a situation that defined the term tipping point, we are there in the CAR,” she said.

A total $107 million is needed for aid operations through September, the end of the rainy season, but the international community has funded only a little more than one-third of that amount, she added.

During her visit, Cousin spoke with President Samba-Panza about the need to increase security to safely distribute food, and they both agreed that the reverse was true as well: that overall security in the country depends on people having access to food. “We know that we will not have security if people are hungry,” said Cousin.

Because of the continued violence, Samba-Panza is seeking additional peacekeeping troops from the United Nations and France. About 6,000 African and 2,000 French troops are now in the former French colony, and the European Union has said it will send 1,000 more. 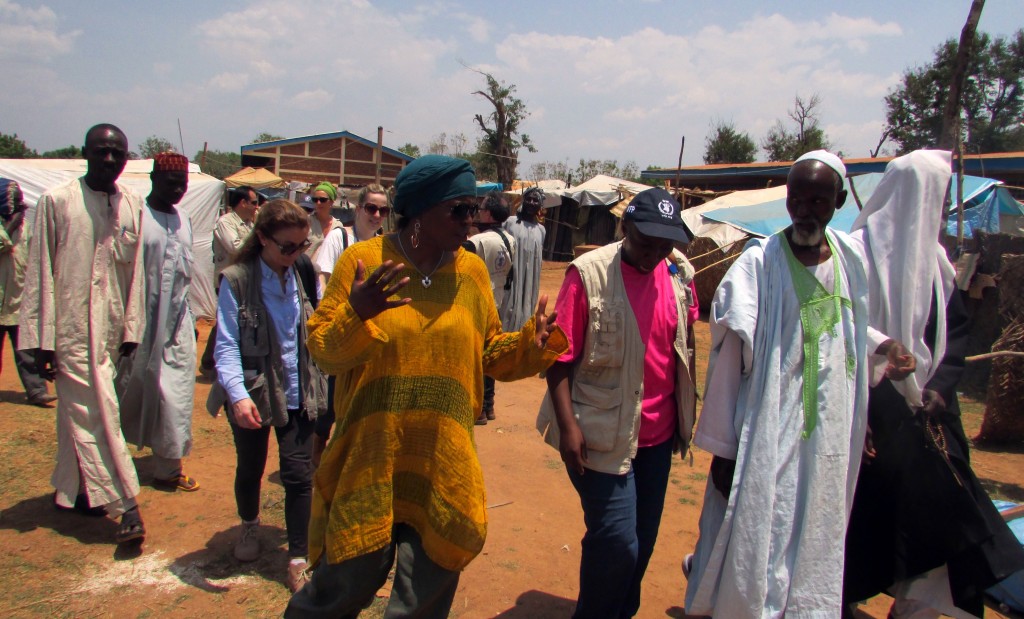 Ertharin Cousin (in yellow), executive director of the U.N. World Food Program, walks with the imam of the Bossangoa mosque (on right) in the Central African Republic on March 19, 2014. Photo by Pacome Pabandji/AFP/Getty Images

On the local level, signs of reconciliation are emerging. Cousin said she met with a Catholic bishop and Islamic imam in the city of Bossangoa, about 186 miles north of Bangui. The Muslim community there had been destroyed — its residents were chased from their homes and are now living in tents and an abandoned school. The bishop was trying to provide services to the Muslim and Christian communities.

“Both were concerned about the security situation and were supportive of our efforts to increase the food security issue,” said Cousin. “But both talked about how they are Central Africans and committed to being in this country and working for a better future for this country.”

Left: About 30,000 people live beside the airport in Bangui in the Central African Republic. Many are reluctant to go home, despite their meager living conditions in the camp, because they feel safer as a group. Photo by Pacome Pabamdji/AFP/Getty Images