One in four children in Syria are at risk of developing mental health disorders, according to a new report released by the nonprofit group Save the Children on Monday.

Save the Children staff and their local partners interviewed 458 children and adults, and consulted mental health specialists, on the toll Syria’s six-year war is having on children.

The report, titled “Invisible Wounds,” chronicles the day-to-day traumas children there face, including: 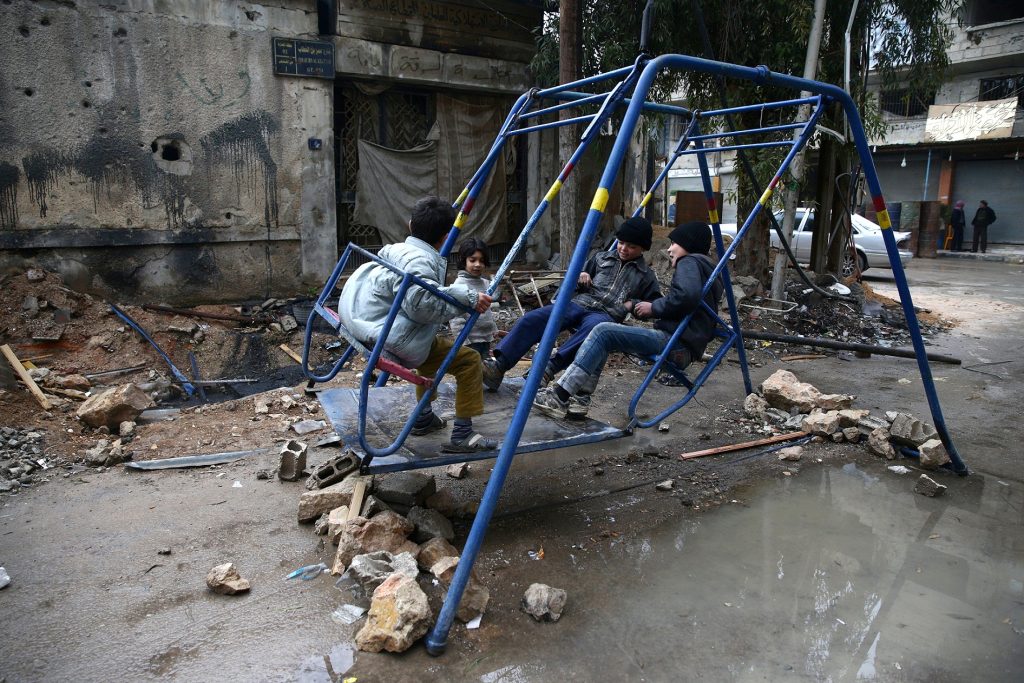 Children play on a swing in the rebel held city of Douma, north-east of Damascus, on March 1. Photo by Bassam Khabieh/Reuters

Aid groups are concerned that because of the prolonged fighting disrupting children’s lives, there will be a “lost generation” of uneducated youth with psychological scars. More than 2 million children in Syria, along with 700,000 children in refugee camps in neighboring countries, don’t have access to an education, according to the United Nations.

A “cessation of hostilities” announced in December did little to protect all children in Syria because there were still pockets of fighting in areas that humanitarian organizations couldn’t reach, said Geert Cappelaere, UNICEF’s regional director for the Middle East and North Africa, in Geneva last month.

“The immeasurable cost in lives and suffering should shame the world into taking immediate action in finding a political solution to the war,” he said. “What if these were your children?”

Groups such as Save the Children offer programs that help children express their worries through art, and establish community activity centers where children can talk to counselors about their anger and fears. One child in the “Invisible Wounds” report drew her mother much smaller than the rest of the family. The art teacher later learned that her mother had died although the child wasn’t able to say it.

Even though adversity early in childhood can have lingering effects, all hope is not lost, according to the report.

“What came through clearly in the research is that despite all they are going through, many children still dream of a better future, of becoming doctors and teachers who can contribute to building a peaceful, prosperous Syria. All they want is the opportunity to do so,” it said.

The interviews took place between December 2016 and February 2017 in Aleppo, Damascus, Daraa, al-Hasakah, Homs, Idlib and Rif Damascus in areas held by the opposition. Interviewers were unable to access government- and Islamic State-held areas.

Left: Syrian children, who fled the Islamic State-held city of Raqqa, play near their tent in a camp for those displaced by the fighting. Photo by Rodi Said/Reuters