Friends Rebecca Brandt and Callie Brauel quickly learned two things while they were studying and volunteering in Ghana’s capital Accra: Everyone drinks water out of disposable bags, which end up discarded in the streets, and tens of thousands of children were living on the streets.

The women thought they could do something about both.

They, along with Emmanuel Tetteh Quarmyne, a Ghanaian who Brauel met at an NGO management class at the University of Ghana, joined forces to create a mock nonprofit for a classroom assignment. The nonprofit would recycle the used water bags, and give the homeless youth a safe and dependable way to earn a living by making marketable products from the bags.

Their project turned into reality when the three founded the nonprofit A Ban Against Neglect, or ABAN, in 2008 to help young mothers in poverty train for a job.

“We saw these two pieces of the puzzle that a lot of society saw as lower class citizens, but really they have so much potential,” said Brandt, 26. “Same with the plastic waste. How can we take something that seemed to have no value and give it value.”

They brought their recycling idea to a local sewing center in Accra, which was having trouble making ends meet. They then moved the enterprise to Aburi, about 45 minutes outside the capital, and broadened the program to include a preschool and health and education training for the young women participants.

“We’ve focused on young women, ages 17-23,” said Brandt. “Many go to Accra, and are living and sleeping in dangerous circumstances and their children are raised on the street.” 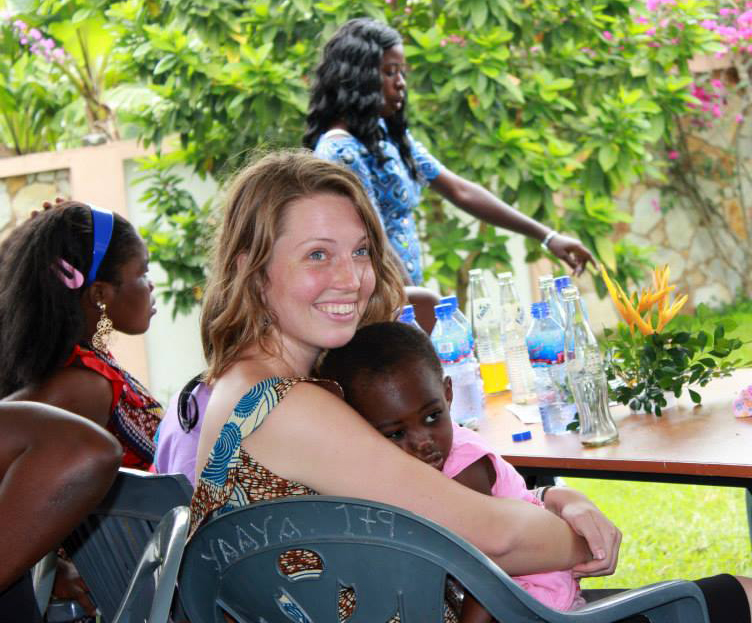 ABAN works with schools and families to collect the ubiquitous used water pouches, which are then sanitized and stitched into liners for purses, pencil cases and totes. The women dye fabrics in traditional batik style for the outer layer and decorate the bags with colorful glass beads made from recycled bottles. The products are sold online and at stores in Ghana and the United States.

In the first year of ABAN’s community employment program, 10 women participated. This year, 50 are expected to enroll.

For the first six months of the program, the women learn business skills from microfinance organization Hopeline Institute, along with basic health, literacy, English and math. After they complete those courses, they have the chance to enter an 18-month sponsored apprenticeship at the employment center.

After graduating from the apprenticeship, ABAN matches the mothers’ savings to give them start-up capital to pursue their next job, whether it’s sewing, working at guest houses or starting new businesses. With this new skill set, “they go out into the world as more confident women,” said Brandt.

Three years ago, program participant Rebecca Akua Hooper, now 23, heard about ABAN while she was involved with another nonprofit that was helping girls on the streets of Accra. She started washing the recycled water bags for ABAN and was paid a small amount. But she decided to do more.

“I wanted to learn a skill that will eventually help me to support myself and my son,” said Hooper. “My family does not have much money to support the both of us and being a mother, it was up to me to take care of my son.”

So Hooper enrolled in the business training program, which included sharing household duties with the other resident students. Working in the kitchen was the hardest part for her, she said. “Not that I was lazy, but at that time I was learning something new.”

Now that she has graduated, Hooper is earning a monthly salary — working with ABAN’s kitchen staff. “An irony, I think,” she says, adding that she plans to make a career from her cooking training.

Another student, Mary Ama Serwaa, who is now 20, enrolled in ABAN’s programs three years ago when her only son was about two months old. She was living in a suburb of Accra with her other siblings and her mother, who was selling onions to support the family.

“I was doing nothing” at the time and “wanted to learn a skill … to help me be self-reliant,” she said. Like Hooper, Serwaa struggled with the apprenticeship at first but enjoyed the artistic aspect of the sewing program. “I knew I was going to create something new and that I was creating it.”

Serwaa said she’s now learning to sew dresses and is continuing to take business classes with the hope of having her own tailoring shop one day. 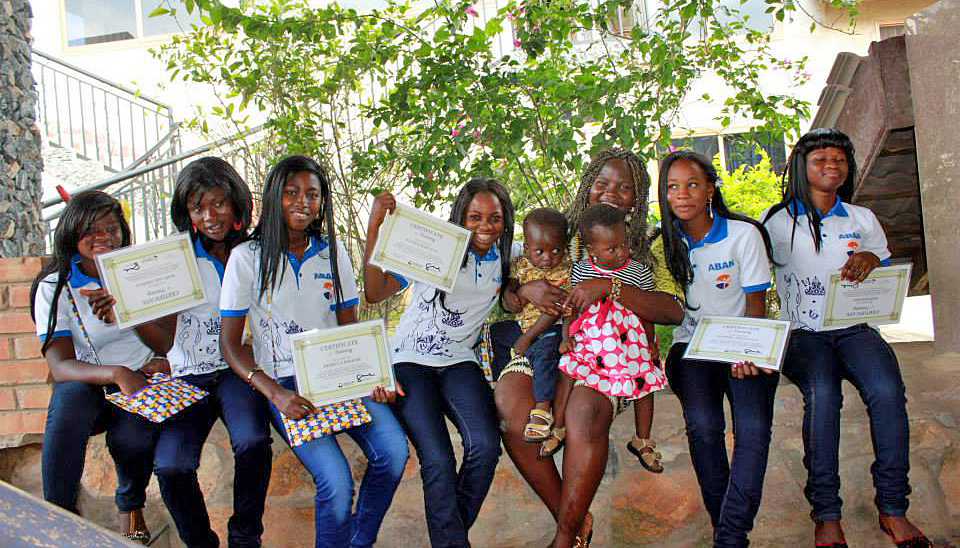 Members of the graduating class of 2013 pose with their certificates saying they have completed the two-year course in “sewing, batik, bead making, housekeeping, catering, and business and leadership education.” Mary Serwaa is second from the left and Rebecca Hooper is third from the left. Photo courtesy of ABAN

ABAN is looking to expand by pursuing contracts from schools to sew uniforms and from corporations to produce tote bags in bulk for conferences, said co-founder Brandt. ABAN has hired back some of its graduating seamstresses to complete the orders, she said.

About 20 people are employed in ABAN’s Ghana location. The Chapel Hill, N.C., office has three employees working on sales, and volunteer interns are recruited from the University of North Carolina. Sales of products account for about 30 percent of ABAN’s funding, and the rest comes from grants and private donations.

Rather than a traditional charity, ABAN has been trying to rebrand itself as a business “so that the women who come into our program aren’t seeing us as a handout but as an opportunity,” said Brandt. As such, she said the language the staff uses — and the women themselves — has shifted.

“We’re not saying we have this opportunity for you, we’re saying you are the opportunity, and we’re so excited to see that unleashed.”

Left: Sewing decorative bags out of recycled materials in Ghana. Photo courtesy of A Ban Against Neglect