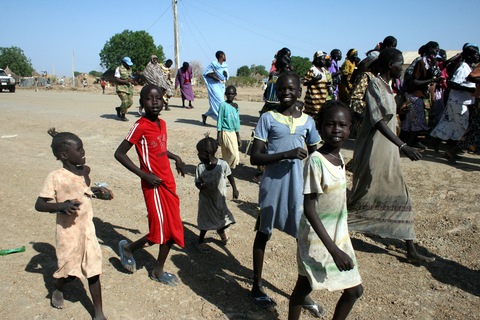 Residents of the village of Abyei, Sudan. Photo by Larisa Epatko

Activists and analysts fear Sudan could be on the brink of another civil war if the oil-rich south votes to break away from the north in a Jan. 9 referendum. The issue has gotten some new attention this week thanks to some high-profile spokespeople.

Actor George Clooney, cofounder of Not On Our Watch, and John Prendergast, cofounder of the Enough Project, met with President Obama and top House and Senate leaders Tuesday. They were pressing a message that robust diplomacy must come soon to deter conflict after the vote or possible Khartoum attempts to delay it.

When asked by MTV viewers about Sudan in a town hall Thursday, President Obama called it a “huge” issue. “It’s important for us to prevent … these wars not only out of charitable reasons but also out of self-interest, because if war explodes there it could have a destabilizing effect that creates more space for terrorist activity that could eventually be directed at our homeland,” he said.

The southern referendum is required under the Comprehensive Peace Agreement of 2005, which ended a two-decade civil war between the mostly Arab and Muslim north and the mainly Christian and animist south. Nearly 2 million people were killed in the war.

It’s been five years since the CPA was signed, but only recently have people fully come to grips with the possibility that the south will want to split from the north and the issues it raises, said Ambassador Princeton Lyman. In August, the State Department sent Lyman to join Sudan envoy Scott Gration and focus on thrashing out referendum-related issues of wealth and resource sharing.

“I think there was a feeling in the north that there was a good chance that after five years, the south would vote for unity, and that the issues therefore wouldn’t be as serious,” Lyman said. “But it now looks like the south will vote for secession, and I think people are just coming to fully grips with that and saying, ‘OK, if that’s going to be the case, then we’ve got a lot of hard issues to look at.'”

Talks aimed at ironing out lingering issues related to a simultaneous referendum in Abyei, an oil-rich village along the south-north border, broke off this week without a resolution. Voter eligibility, especially for the Arab semi-nomadic Misseriya, who live in Abyei for part of the year, remains one of the major sticking points.

The parties involved did agree to revisit Abyei issues at broader referendum talks in Ethiopia at the end of October, said Lyman.

Meanwhile, some North Sudanese officials said Thursday it would be impossible to hold the Abyei vote — also scheduled for Jan. 9 — on time, while southern Sudanese leaders called a delay “unacceptable,” Reuters reported.

“I think the referendum will go ahead on Jan. 9, but you can already see the [ruling National Congress Party] laying the foundations for rejecting the outcome,” said [Richard Downie](http://csis.org/expert/richard-downie), a fellow with the Center for Strategic and International Studies’ Africa program.

President Omar al-Bashir told parliament that in a free and fair referendum, the outcome will be unity.

“In some ways, that’s the worst case scenario: a flawed referendum, which the north can turn around and reject,” said Downie. “Then we’re into very dicey territory.”

Foreign Minister Ali Karti later said Khartoum would respect the outcome of the partition referendum, a sentiment expressed to a U.N. Security Council delegation that traveled to Sudan earlier in October.

During that visit, President of southern Sudan Salva Kiir asked for a U.N.-run 10-mile buffer zone along the north-south border.

Alain LeRoy, head of U.N. peacekeeping, said the United Nations will move troops from southern Sudan to the northern border to deter violence, but that the U.N. lacked the resources to create a full buffer zone.

The two main political parties in Sudan — the ruling National Congress Party and the Sudan People’s Liberation Movement in the south — also have to act quickly to calm people down if it looks like violence will erupt, said Lyman.

Clooney said the southern Sudanese he and Prendergast met during a recent trip there are bent on voting for independence on Jan. 9. “To a man and woman, they are willing to die for it,” he said.

U.S. Ambassador to the U.N. Susan Rice will discuss Sudan on Monday’s NewsHour.