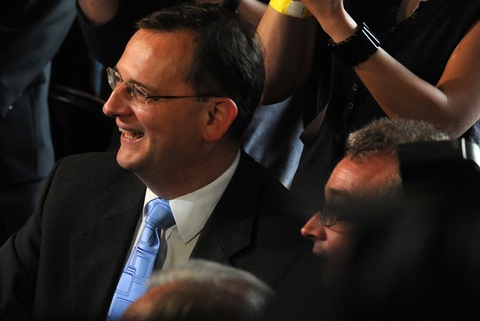 Concerns over the economic crisis in Greece helped give a leg up to conservative parties in the Czech Republic’s parliamentary elections over the weekend. The parties are now working to build a coalition to tackle the country’s budget deficit.

The conservative Civic Democratic Party and two new parties — the conservative TOP 09 and the rightist Public Affairs — captured 118 seats to give them a commanding majority if they reach a coalition deal.

Petr Necas, head of the Civic Democrats, said Sunday that the three parties were looking to form a coalition and cut the budget deficit, which now stands at 5.9 percent of gross domestic product, reported the New York Times.

“The results over the weekend were a very big surprise,” said Bruce Konviser, GlobalPost’s correspondent in Prague.

Voters were upset with the de facto duopoly of the two main parties, corruption scandals and the budget deficit, he said. “With the current economic crisis in Greece, that made some voters probably a little nervous about the left,” which also contributed to the results, he added.

Assuming the three parties form a coalition, the first thing they are expected to do is slash the budget deficit, which would help the country join the eurozone, said Konviser. However, “the leading right-wing party has been lukewarm at best if not opposed to joining the eurozone,” he said.

The elections also brought in many new and younger participants in the political scene, Konviser continued. “Of the 200 members of parliament, more than half … were not returned to parliament, so (it was) a very large turnover.”

Hear more of our conversation here: