South Asia floods have killed more than 1,400 as communities brace for more

Monsoon rains and heavy flooding in South Asia have killed upwards of 1,400 people in the past month, affecting 40 million people across the region as communities brace for at least another month of storms.

The floods have destroyed homes, schools and health centers. And heavy rains are expected through at least October, the United Nations said Friday. Oxfam’s latest count put the death toll at 1,453, including 1,170 in India, 143 in Nepal and 140 in Bangladesh. 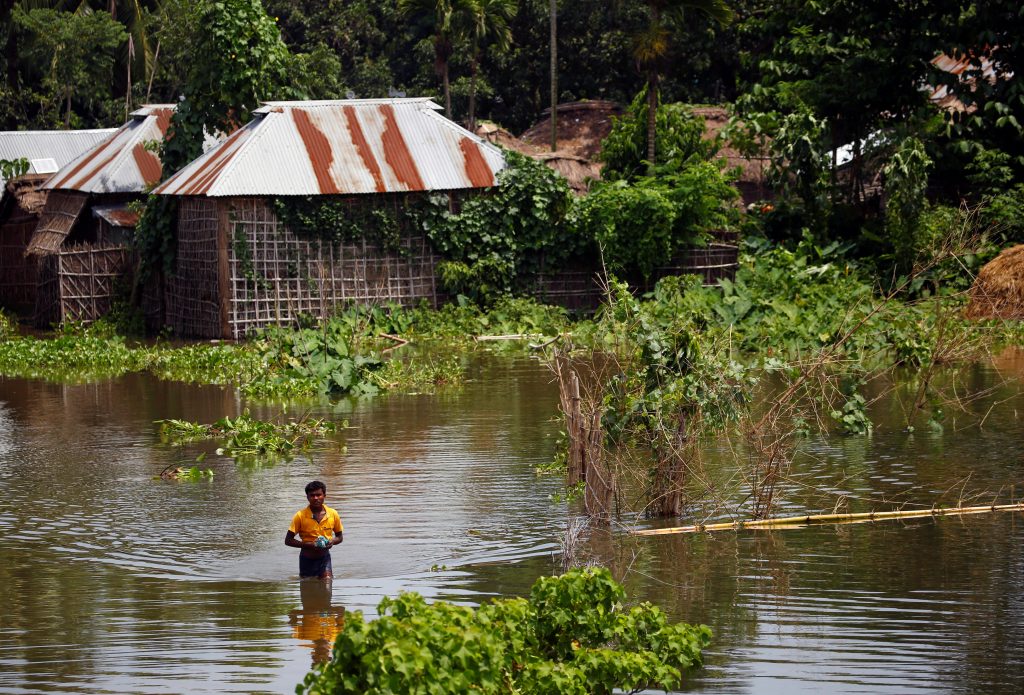 “While some flooding is normal during the monsoon season, for most of the communities hit this level of flooding is unusual and unheard of,” Oxfam said in a statement.

“The rains this year have been heavier than usual. In some districts the rainfall has been the heaviest in 60 years,” said Valerie Julliand, the resident coordinator of the United Nations in Nepal. 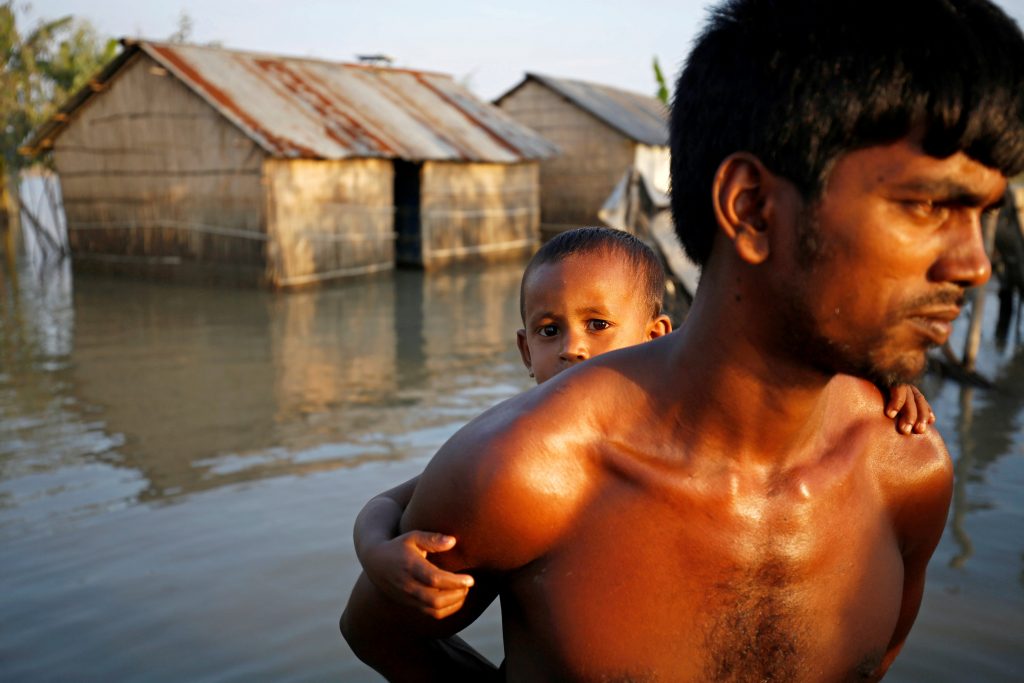 Oxfam reported that two-thirds of Bangladesh was underwater. Photo by Mohammad Ponir Hossain/Reuters

Why? Raman Kumar, Oxfam partnership and capacity development adviser for Asia, told the PBS NewsHour by email that the countries are facing changing and increasingly unpredictable precipitation patterns — “another impact of changing climate,” he said. “More precipitation in less time, as well as in changing geographies in some cases, is surpassing the preparations and coping capacity of the communities.”

Oxfam reported that two-thirds of Bangladesh was underwater, and some areas have seen the worst flooding since 1988. In India, monsoon rains caused some buildings to collapse and have breached dams, threatening villages with flooding. Train service was interrupted and flights cancelled in Mumbai. 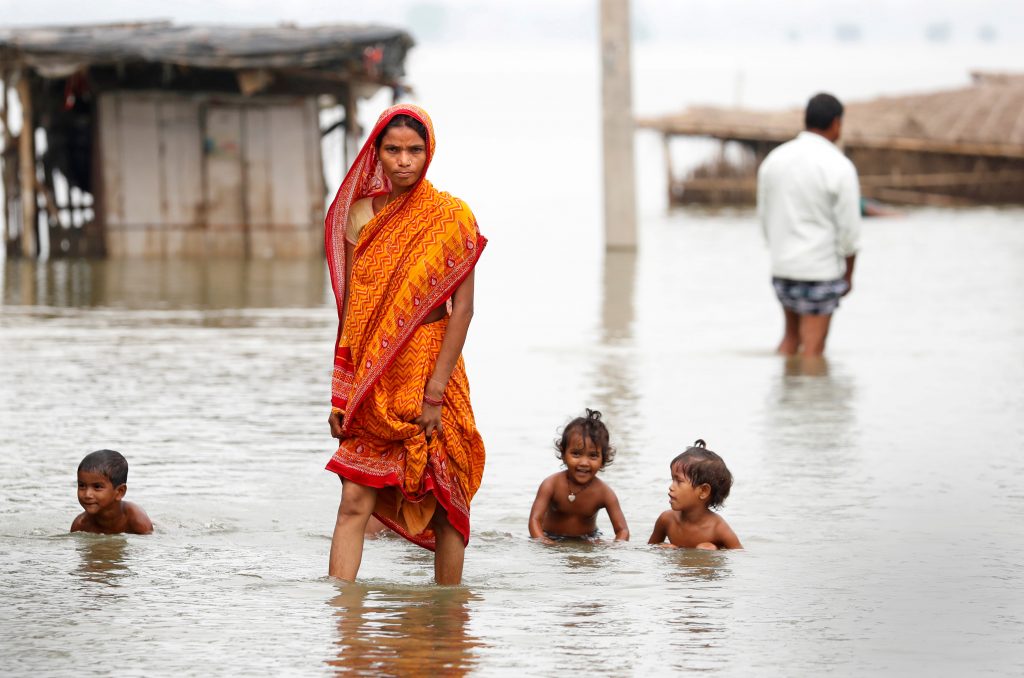 “People’s greatest need — beyond the humanitarian ones — is to have the certainty that whatever livelihoods and life they rebuild are not going to be lost again in tomorrow or next year’s floods.” — Valerie Julliand, United Nations

Those who have survived are in need of health services and food. Longer term, “people’s greatest need — beyond the humanitarian ones — is to have the certainty that whatever livelihoods and life they rebuild are not going to be lost again in tomorrow or next year’s floods,” Julliand said. They’ve been displaced from their homes, and in many cases have completely lost their crops and livestock. They want sturdier embankments to hold back rivers, and access to jobs and income-generating activities, she said. “If employed, people’s resilience multiply a hundredfold.”

Across the monsoon-affected areas in the three countries, at least 18,000 schools were damaged or destroyed, Save the Children estimated. Other schools are being used as shelters, so in all, about 1.8 million children cannot go to classes, the group said. 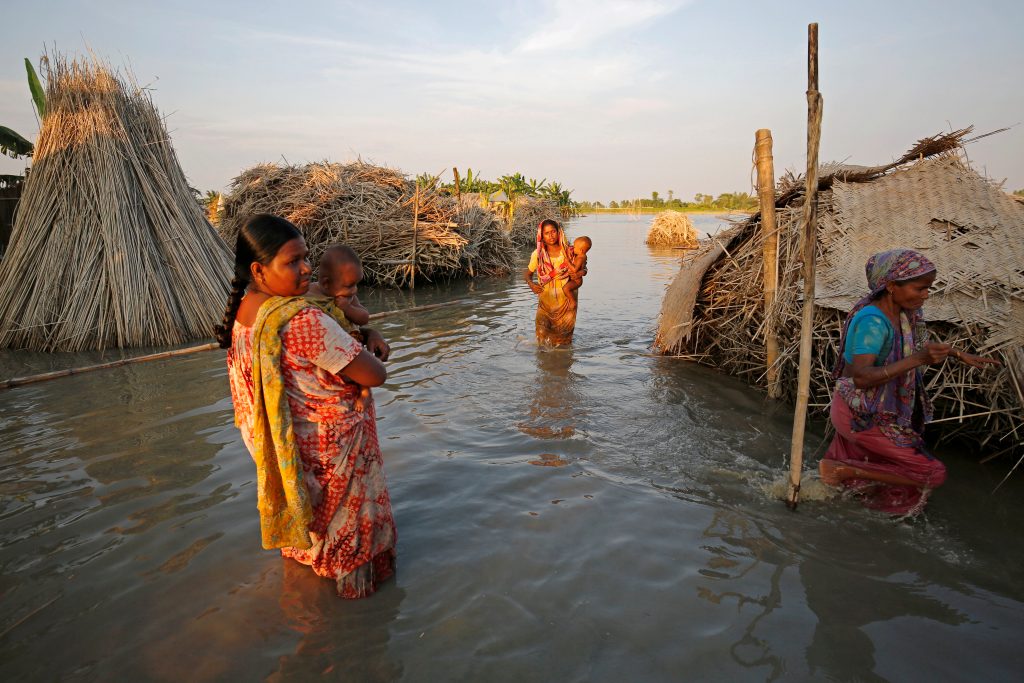 Homes are flooded in Bogra, Bangladesh, on Aug. 20. Photo by Mohammad Ponir Hossain/Reuters

“School is the absolute best place for children to be, acting as a protection mechanism against things like child labor, early marriage and child trafficking, which can occur in times of emergencies like floods, when poor communities are pushed to the brink,” said Mark Pierce, Save the Children’s country director in Bangladesh. “School also supports children’s emotional recovery, providing a sense of normality and routine and a place to be with their peers,” making it just as urgent of a need as shelter, water and food.

“While the majority of deaths in the floods are men (over 60 percent), the situation of women and girls is especially grim in the affected communities,” Kumar said. “The groups with special needs include women, girls, children, elderly, people with different abilities, single women and women-headed households as such groups have specific needs including hygiene, privacy and protection. There are reports of gender-based violence coming from some communities.

“Recovery will be only possible through a joint effort from international agencies and local population, where the needs of the most vulnerable population are at the very center,” he added. 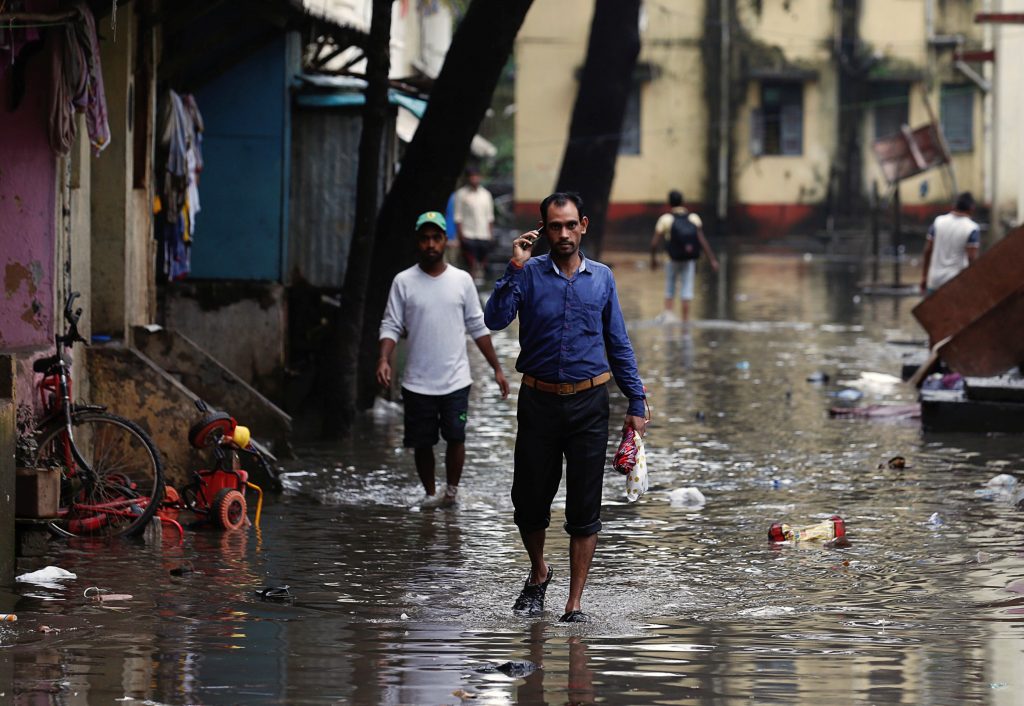 People walk through a flooded street in Mumbai, India, on Aug. 30. Photo by Danish Siddiqui/Reuters

Left: People use a makeshift raft to transport goats along a flooded road in the northeastern state of Assam, India. Photo by Anuwar Hazarika/Reuters