For Russian children, fears of cancer are eased by a special doll

For a child, a cancer diagnosis can be the stuff of nightmares. So doctors in Russia have started using a doll to demonstrate treatments, answer questions and try to ease fears.

The doll, which is equipped with pictures of organs and cells, can show where catheters go and how chemotherapy drugs enter the body.

Hospitals around the United States commonly use the dolls, and now a program funded by Podari Life in the United States will introduce them to the Dmitry Rogachev National Research Center of Pediatric Hematology, Oncology and Immunology in Moscow.

Alina Khain, a clinical psychologist in Moscow, underwent training at St. Jude Children’s Research Hospital in Memphis, Tennessee, on how to integrate the doll into her work with young patients. Podari Life bought her a doll to train other specialists and is poised to buy more doll kits if the program expands.

Donors also contributed to courses for another Russian clinical psychologist, Ekaterina Stefanenko, to learn how to minimize the stress child patients and their families feel at the hospital. Once certified, “she will become the first child life specialist in Russia,” said Lelia Shergova, co-founder of Podari Life Inc. Shergova was a volunteer with Podari Zhizn (“Gift of Life”) in Moscow, before she moved to Boston and started the sister nonprofit, Podari Life, in 2015. A second sister charity, which opened in 2011 in London, helps buy medicine for young cancer patients in Russia and register bone marrow donors. 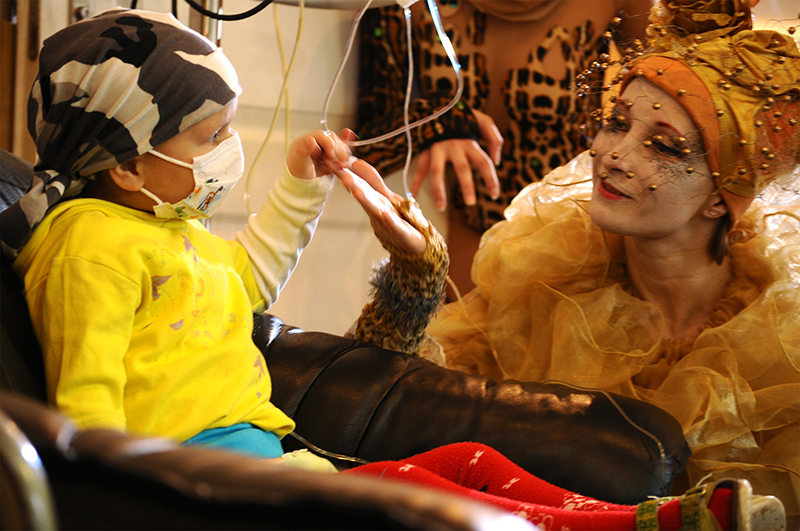 In addition to paying for the doll and Stefanenko’s certification training in the U.S., Podari Life has raised about $50,000 per year to help pay for hospital equipment and for Russian doctors to attend medical conferences, such as the International Society of Pediatric Oncology in Washington, D.C., in October and the American Society of Hematology in Atlanta in December. Donations also cover the costs for American and Canadian doctors to attend conferences in Russia to present new cancer treatments.

Dr. Yoav Messinger, a pediatric hematologist-oncologist and the medical director of cancer and blood disorders at Children’s Hospitals and Clinics of Minnesota, participated in the 8th Meeting of the National Society of Pediatric Hematologists and Oncologists in Moscow in May.

Messinger and his team research the genetic disorder DICER1, which increases the risk of developing tumors in the lungs mostly among infants and young children. “It’s more common than we thought, and there are quite a few kids in Russia who have it,” he said. “I gave them an update on the most advanced knowledge of this disorder” and how to treat and manage it.

Bringing doctors together to share their expertise enables children to receive treatment within Russia, either at the central Moscow location or other cancer wards. “None of us wants these kids to fly over the whole world just to get help” when they can undergo surgery, bone marrow transplants or receive other anti-cancer therapies closer to home, Messinger said. “And they’re able to do it in a background of a very limited resources health services.”

Because DICER1 syndrome is a rare disorder, the more patients involved in clinical protocols the better to see which treatments work, and the Russian doctors were all eager to collaborate on research, said Messinger.

At the conferences, the political rhetoric surrounding U.S.-Russia relations rarely – if ever – enters the conversations of doctors, who are more interested in learning new procedures and finding ways to help each other, he said.

Shergova herself observed that even among Russians living in the United States, “you cannot find a politically neutral person … they either hate (Russian President Vladimir) Putin or love Putin.” But no matter where they stand politically, they find a common purpose in the mission to help children, she said.