Gambians flee as new president is sworn in, fearing violence from political showdown

Updated on Jan. 23 | Long-time Gambian ruler Yahya Jammeh, who had refused to leave office even after a new president was sworn in last week, has taken temporary refuge in Equatorial Guinea. New President Adama Barrow is still in Senegal, where he fled to escape harm. In a statement, the U.S. Department of State applauded the “on-going peaceful transition of power” and “restraint shown by the Gambian people.”

Barrow was sworn in at the Gambian embassy in Senegal’s capital Dakar at a brief ceremony that was broadcast on television screens as people gathered around outside to watch.

Hours later, Senegalese troops entered the Gambia in a show of force against Gambian ruler Yahya Jammeh, who is refusing to relinquish power.

Jammeh, who has ruled the Gambia for 22 years, at first said he would accept December’s election results. But just two weeks later, he reversed course, later declaring a state of emergency. The National Assembly voted this week to extend Jammeh’s term, which expired at midnight, for another three months.

A regional force made up of troops from Nigeria, Mali, Togo, Ghana and Senegal had positioned itself at the Gambian border as the long-time ruler clung to power. The bloc of West African nations, known as ECOWAS, sent a draft resolution to the U.N. Security Council allowing them to use “all necessary measures” to remove Jammeh. 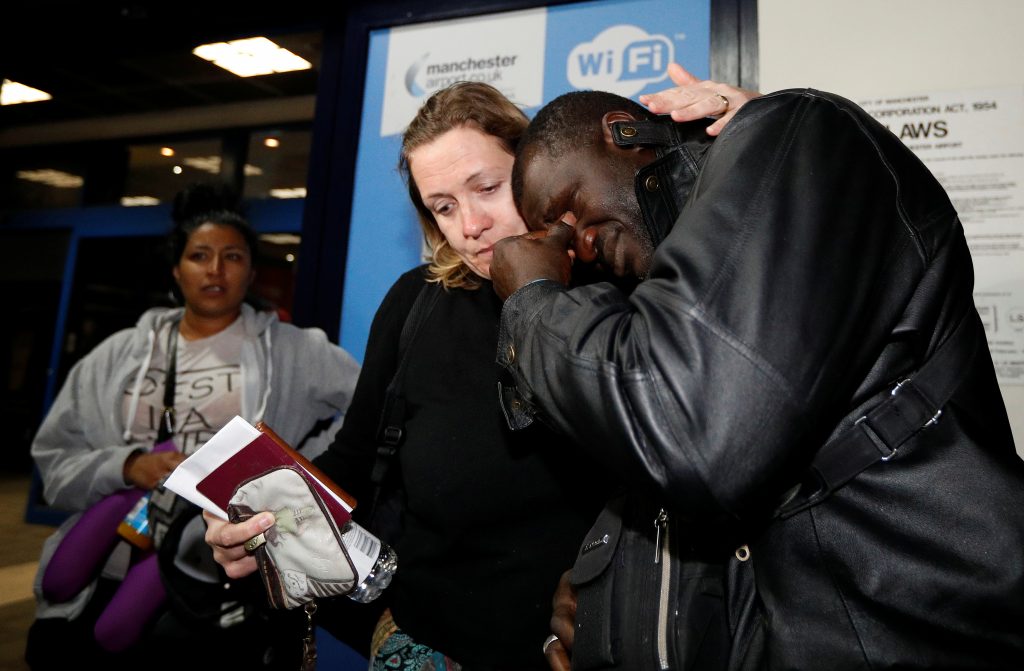 Sara Wilkins (center) of Britain consoles fellow passenger Ebrima Jagne of the Gambia after they were evacuated from the Gambia to Manchester Airport in England on Jan. 18. Photo by Phil Noble/Reuters

Gambians and tourists flowed out of the country this week by the thousands, fearing possible violence.

The atmosphere on Thursday shortly after the inaugural ceremony remained calm, and people were waiting to see what would happen, said Carla Fajardo, a Catholic Relief Services representative for Senegal and the Gambia.

She said by phone from Dakar that mostly women and children were leaving, staying with families and friends either in the countryside or in Senegal, which wraps around the much smaller Gambia in West Africa.

Her organization and other aid groups are monitoring the movement of people. “You don’t have refugee or [internally displaced person] camps, but stresses related to increased households,” said Fajardo.

“Local communities have been really gracious to open their doors, but resources are scarce … so it will be very important to support these host families,” she said.

Left: A crowd gathers outside the Gambian embassy in Dakar, Senegal, for the inauguration of Gambian President-elect Adama Barrow on Jan. 19. Photo by Emma Farge/Reuters