These Soviet propaganda posters once evoked heroism, pride and anxiety

Propaganda during Soviet times came in poster form. Some messages stirred patriotism in the fight against Adolf Hitler’s invading forces, while others slammed illiteracy and laziness.

They also bashed the greed associated with capitalism: 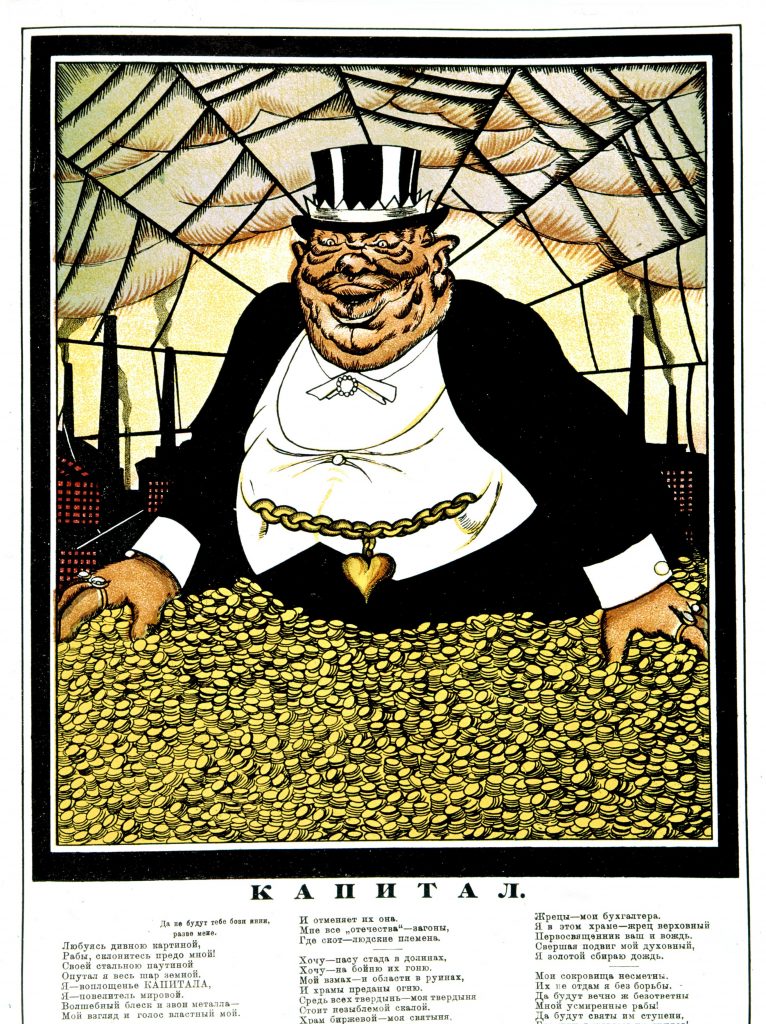 This year marks the 100th anniversary of the Russian Revolution in 1917, which overturned the tsars and led to the Soviet Union. Posters at the time showed positive images of workers and the promise of a new future. 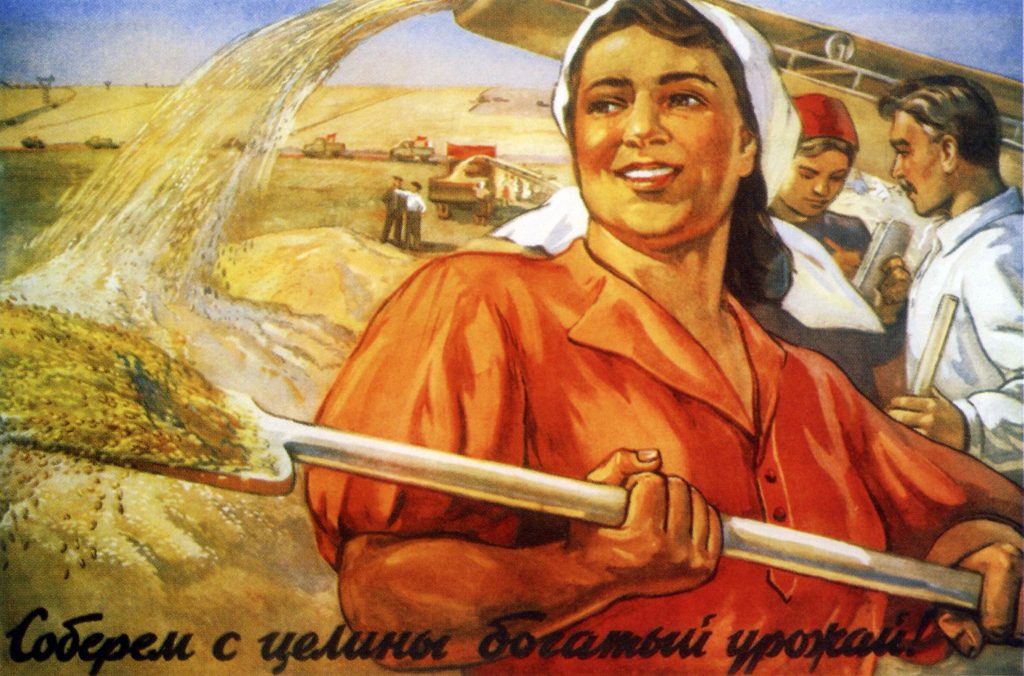 “Let us bring in a rich harvest of new territory!” says a Soviet propaganda poster by Oleg Mikhailovich Sawostjuk in 1927. Photo by Universal History Archive/UIG via Getty images 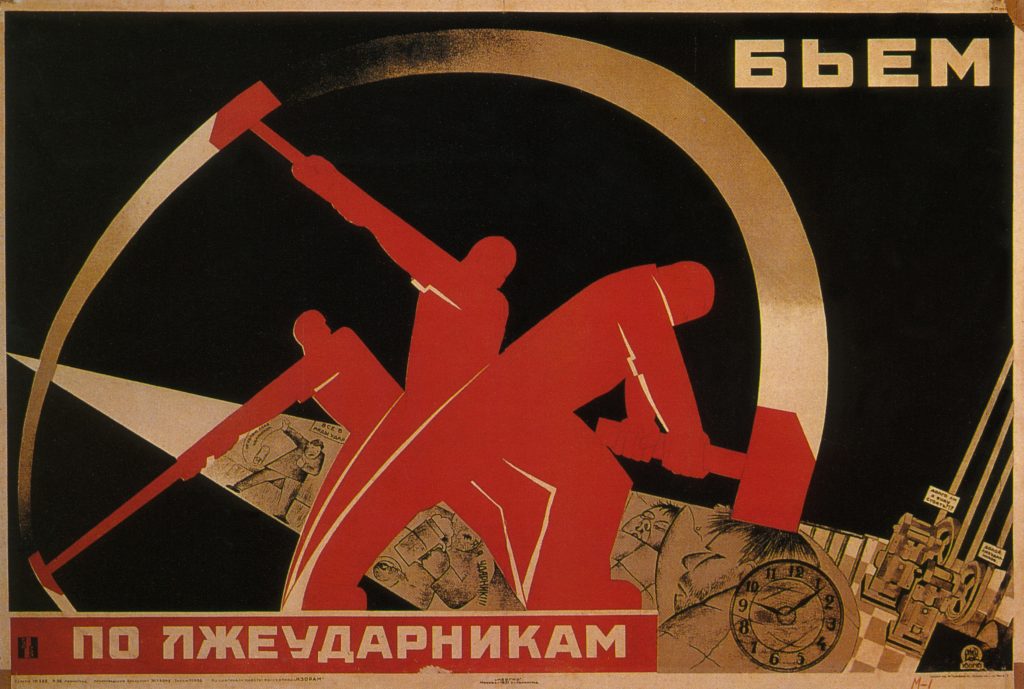 “We smite the lazy workers,” says a 1931 propaganda poster that was found in the collection of the Russian State Library in Moscow. Photo by Fine Art Images/Heritage Images/Getty Images

And urged support for the Red Army and socialism: 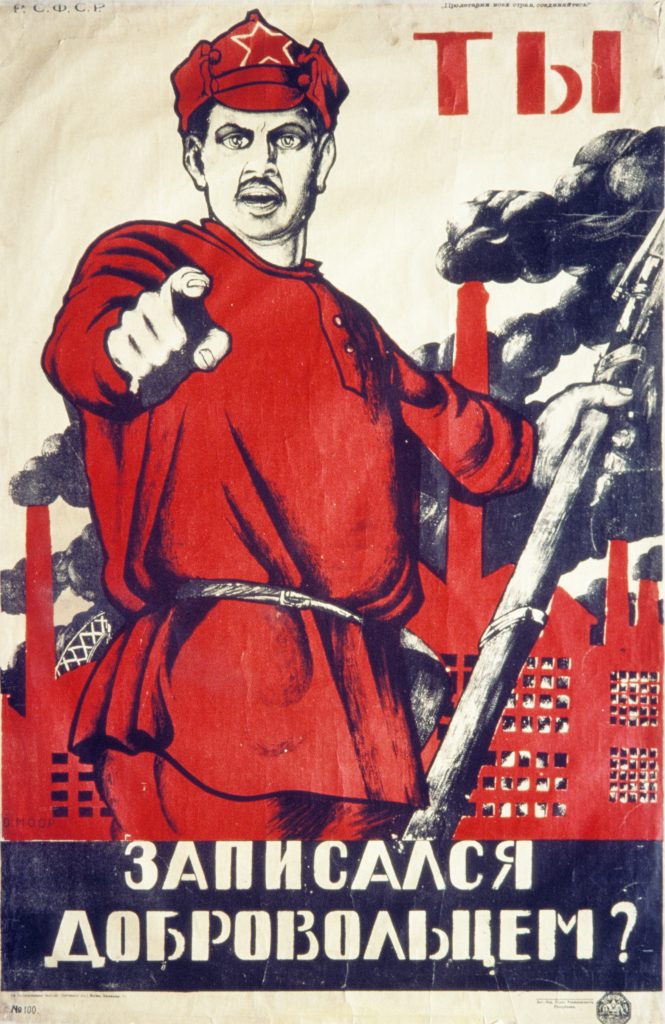 A Soviet recruitment poster from the time of the Russian Revolution in 1917 says, “You! Have you signed up with the volunteers?” Photo by Sovfoto/UIG via Getty Images

After the Russian Revolution, the Bolsheviks instituted a literacy campaign: 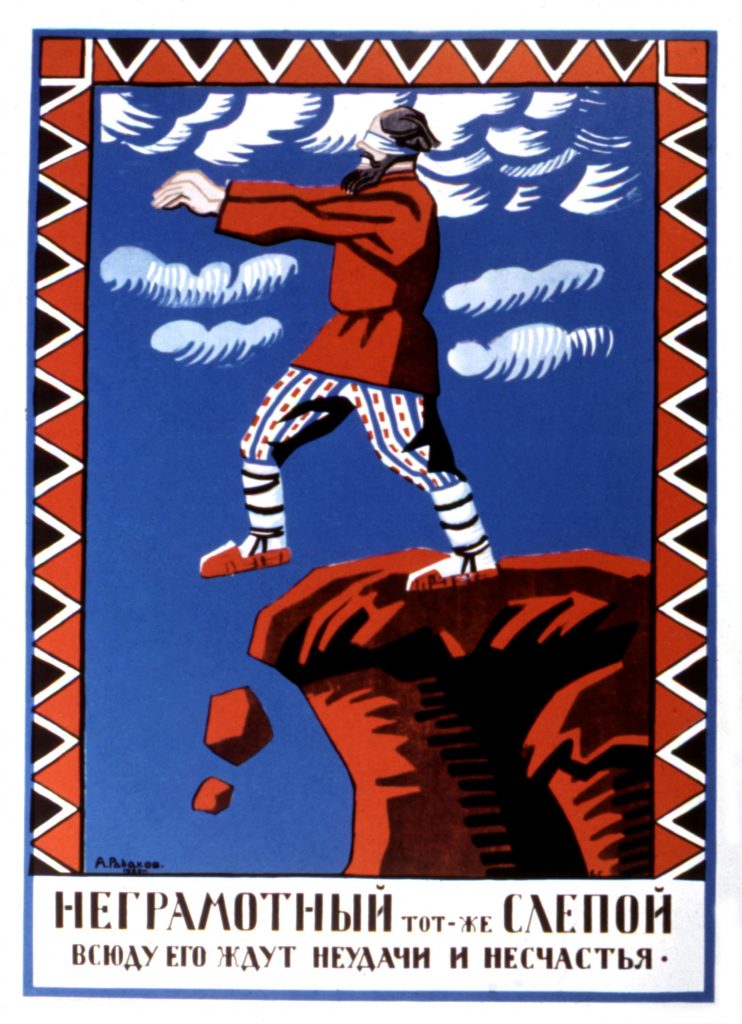 A propaganda poster from 1920 by A. Radakov says, “The illiterate is like a blind man.” Photo by Photo12/UIG via Getty Images 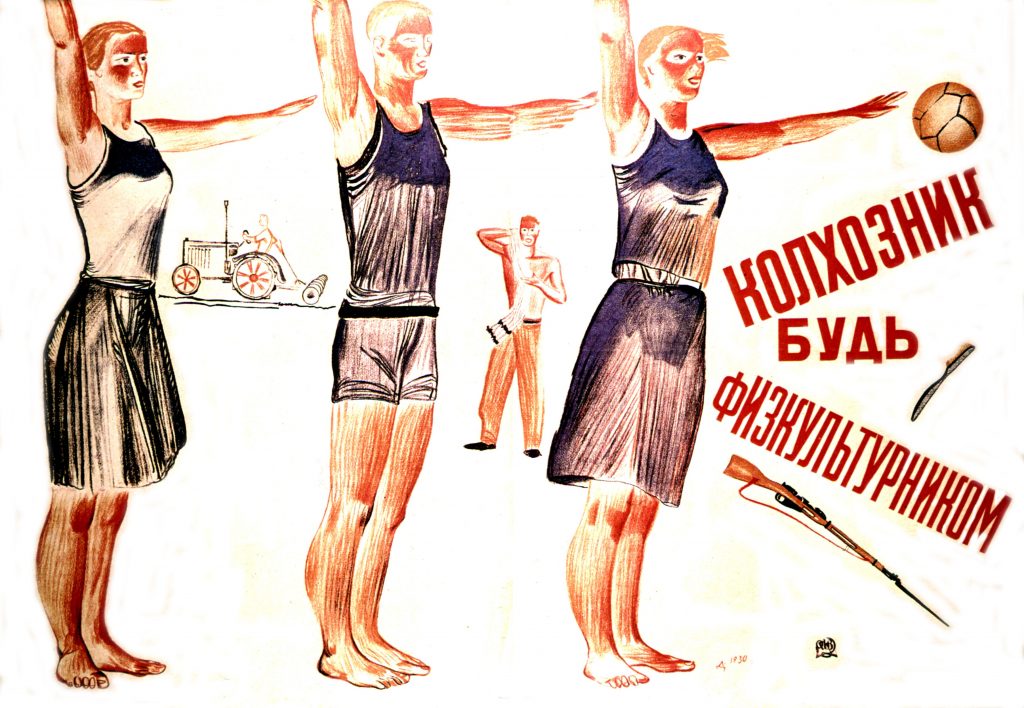 Propaganda poster from 1930 by Alexandre Deineka says, “Kolkhosians, let’s do some exercise!” Photo by Photo12/UIG via Getty Images 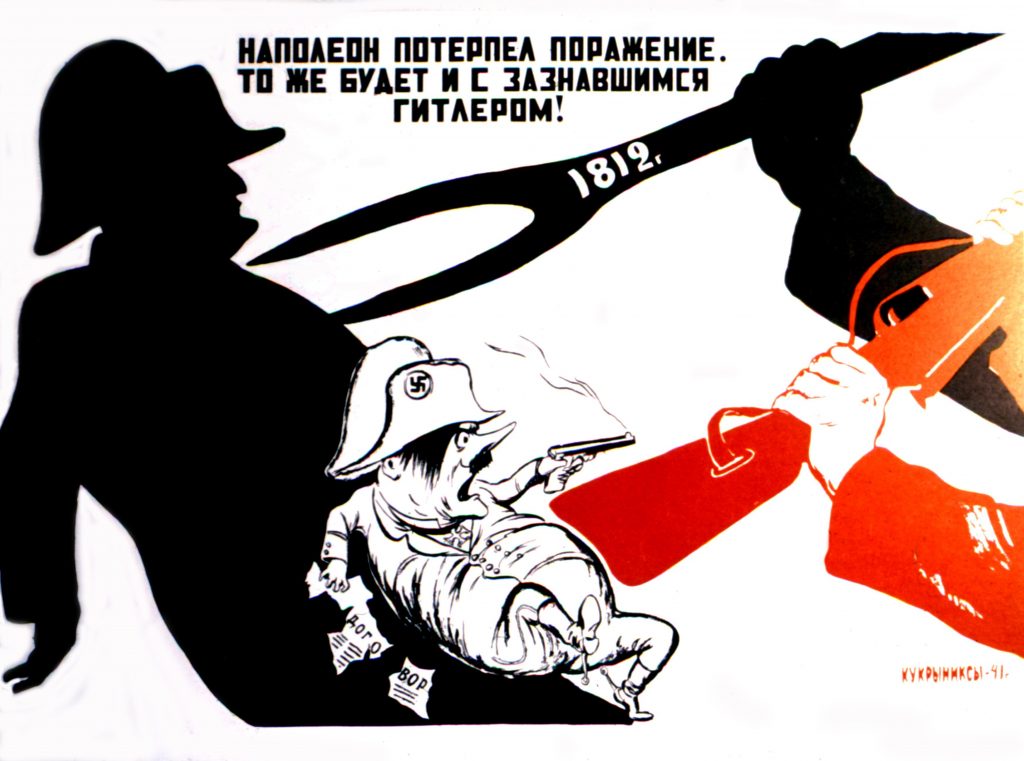 Propaganda poster by Koukrynisky says, “Napoleon was wiped out, Hitler will be wiped out” in 1941 during World War II. Photo by Photo12/UIG via Getty Images 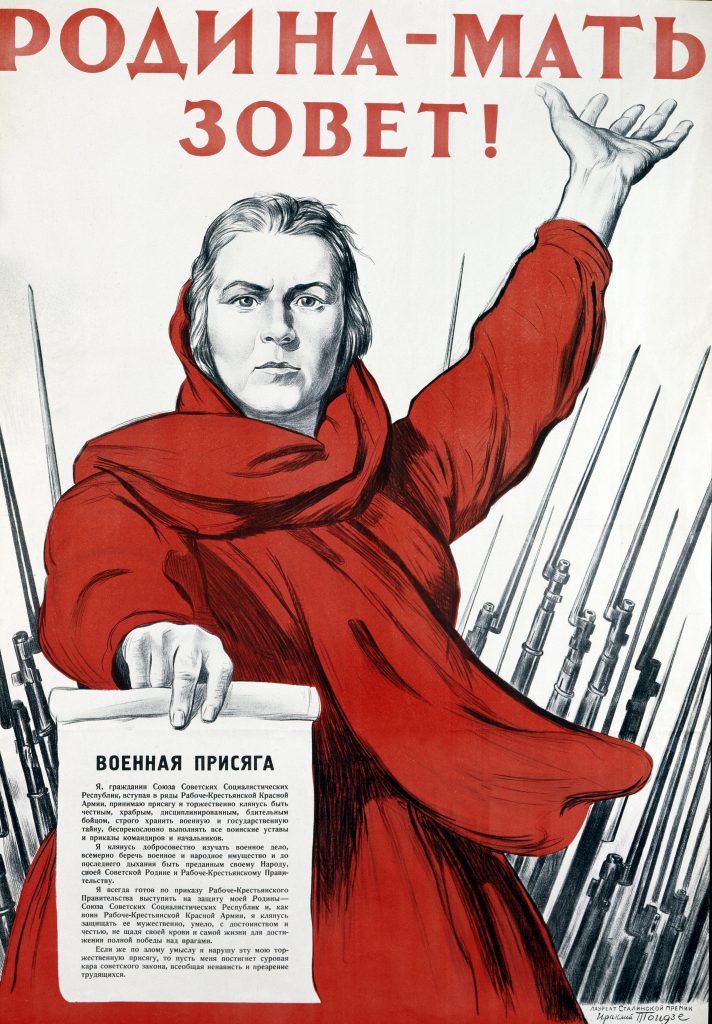 As the Space Race raged between the USSR and United States in the 1950s and 1960s, images showed high-flying patriotism: 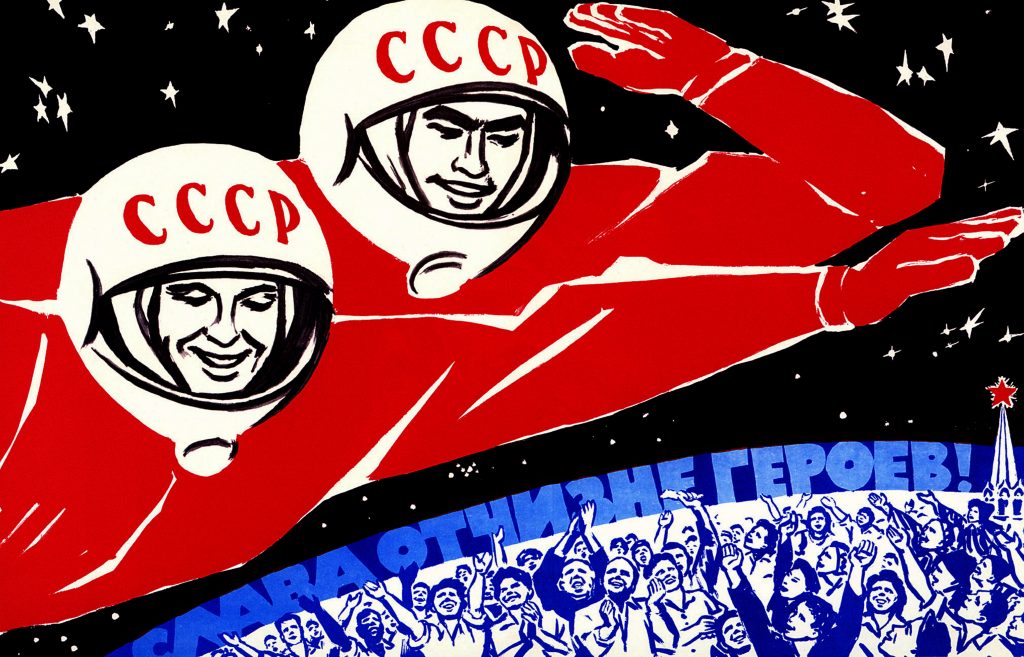 The Space Race was a 20th century competition between two Cold War rivals, the Soviet Union and the United States. Photo by Universal History Archive/UIG via Getty images

The Soviet Union was the first to launch a satellite, Sputnik 1, and a human into space, Yuri Gagarin. With Apollo 11, the U.S. landed the first humans on the moon in 1969. Crews from the two countries now work together aboard the International Space Station.

Editor’s Note: The PBS NewsHour is airing a series this week called Inside Putin’s Russia. Tuesday’s installment describes how propaganda is used in Russia today.

Left: The victory of communism is inevitable, says this 1969 propaganda poster by Konuhov. Photo by DeAgostini/Getty Images