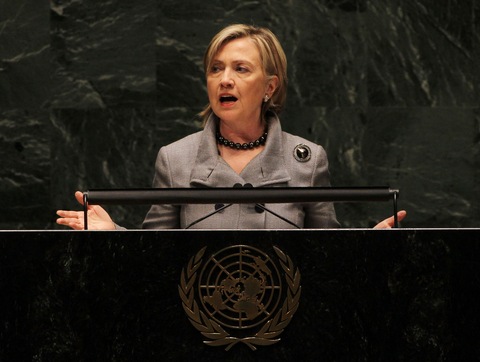 They both spoke on the opening day of the month-long conference held at U.N. headquarters in New York City.

In his opening remarks, Ahmadinejad, who was the only head of government in attendance, called for global nuclear disarmament, including dismantling nuclear weapons at all U.S. bases. He invited President Obama to join him “in this humane movement.”

“Regrettably, the government of the United States has not only used nuclear weapons, but also continues to threaten to use such weapons against other countries, including Iran,” Ahmadinejad said via a translator.

He was apparently referring to the new U.S. Nuclear Posture Review in which the United States retains the option of using atomic arms against countries not complying with the NPT, a charge the United States and its allies have made against Iran. Ahmadinejad again on Monday denied that Iran is working on developing a nuclear weapon.

The “era of relying on nuclear bombs has passed,” he added.

Ahmadinejad also suggested restructuring the International Atomic Energy Agency, asking why the United States could be on the Board of Governors of the NPT after using the atomic bomb in Japan during World War II. The U.S., British and French delegates left the room during his remarks.

Before Ahmadinejad spoke, U.N. Secretary-General Ban Ki-moon said in a statement, “I encourage the president of Iran to engage constructively. Let us be clear: the onus is on Iran to clarify the doubts and concerns about its program.”

When Clinton took the podium, she urged signatories of the treaty to work with the United States on strengthening the nonproliferation rules and standing together to punish violators. “We cannot fall into the ruts left over by old divisions.”

She said Ahmadinejad used the “same tired, false and sometimes wild accusations” against the U.S. in his speech, and she called on Iran to fulfill its international obligations. “Now is the time to focus on practical solutions,” she said.

In addition, Clinton said the administration was interested in joining regional nuclear-free treaties governing Africa and South Pacific, and planned to pledge $50 million over five years to an IAEA fund to help developing countries with nuclear energy programs improve health care and nutrition.

The State Department released a background report on the treaty and on the eighth review conference held May 3-28. The treaty, enacted in March 1970, is signed by 189 nations and reviewed every five years. Here’s a list compiled by the NewsHour of all international treaties dealing with nuclear arms.