Israelis and Palestinians come for the basketball, stay for the camaraderie

Malak, a 16-year-old Palestinian, said she first heard about PeacePlayers International – a group that unites Israelis and Palestinians to play basketball – five years ago. She wanted to learn basketball but was nervous about being around Jews.

“As an Arab, as a little kid, you’re going to be scared,” she said. So she went to her father for advice. He told her, as she recalled, “They’re not bad people. You should give it a try and if you still feel scared, you don’t have to keep going.”

She did give it a try and, over the years, became best friends with an Israeli. People around her didn’t understand, especially when a boy in her East Jerusalem neighborhood was killed by members of a radical Jewish group.

“Everyone told me I was a traitor,” Malak, who asked to use only her first name, recounted during a recent trip to Washington, D.C., with the group. It was painful, she said, especially coming from her own people. “It’s really hard to feel that way.”

She was tempted to quit the team, but it was her Israeli friend who convinced her to stay.

“There’s not one side to every story, or even two – Arab and Israeli – but many sides.” — Israeli teen Toot Imbar

In the divided communities, PeacePlayers provides a neutral space where young people can bond, said Chad Ford, a professor of conflict transformation at Brigham Young University-Hawaii and a PeacePlayers board member.

“It dissolves stereotypes. They see the humanity on the other side, and within months they’re friends,” he said. Parents, once reluctant to let their children participate, “are cheering together in the stands” at the games.

The organization works with youth ages 7 to 16 and currently has 25 teams. The mixed Israeli-Palestinian teams play games with other club teams and compete in the league championships. If players stick with the PeacePlayers program, they can train to become paid professional coaches of their own youth team when they turn 18.

The program benefits them by not only broadening their minds, but by providing them with language training in English, professional training in basketbal,l which allows them to be certified as coaches and earn a salary, and travel to the United States as part of an exchange program, Ford said. 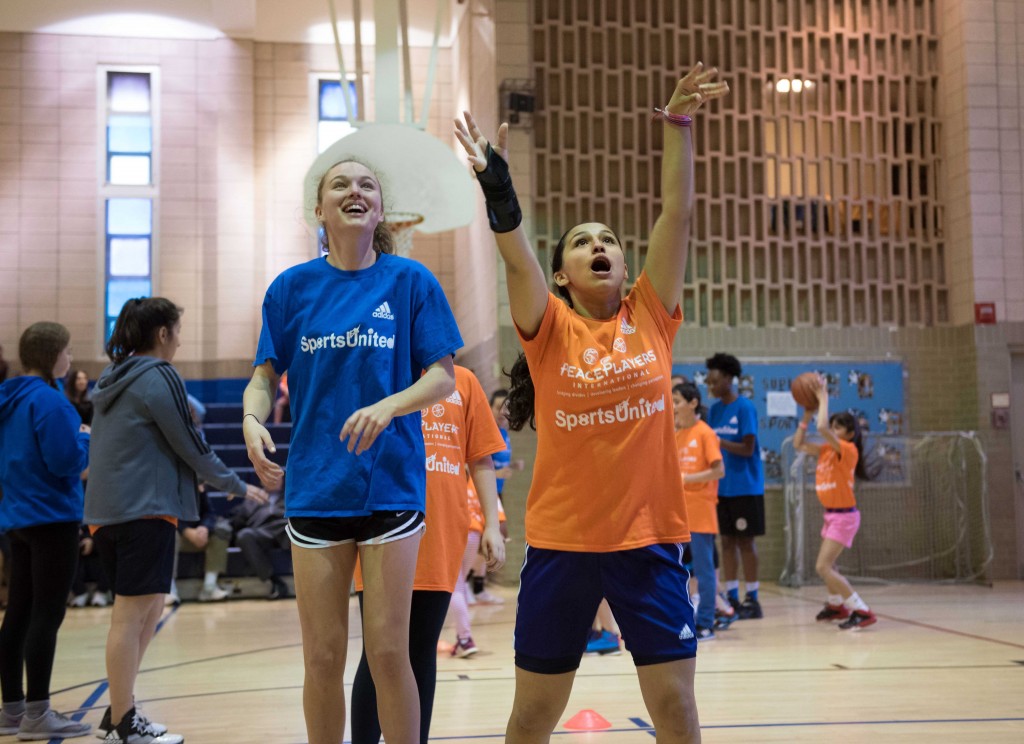 The basketball clinic was part of a 10-day cultural exchange supported by the U.S. Department of State’s Bureau of Educational and Cultural Affairs. Photo by Imagine Photography

PeacePlayers is funded partly by the U.S. State Department and USAID, and has peace-building programs in Northern Ireland, South Africa and Cyprus, in addition to the Middle East.

The difference between PeacePlayers and other dialogue-oriented programs that seek to unite Arabs and Jews is the dialogue programs tend to attract those who already have moderate views, said Ford. Sports programs attract more hardline parents, who want their children to get athletic instruction, and eventually they are won over by the other participants, he said.

One of the visiting Jewish players, 18-year-old Toot Imbar, recalled that during the Israeli-Gaza war in 2014, sirens blared one night and her family had to take shelter in their basement. The first text message she received on her phone was from a Palestinian friend she made on the basketball team, asking if she and her family were OK.

“That moment showed me there’s not one side to every story, or even two – Arab and Israeli – but many sides,” she said. “That’s what I hope people learn about this program.”

Left: Members of PeacePlayers International, visiting the United States as part of an exchange program, participate in a basketball clinic at Blessed Sacrament School in Washington, D.C., on March 19. Photo by Imagine Photography