This summer camp helps kids reach across the Israeli-Palestinian divide

Haifa Staiti met a kindred spirit at a lakeside summer camp in Maine. The two teens talked for hours under the trees. “I felt I was being heard, and I felt comfortable about sharing my experiences,” she said, adding that they remain good friends to this day.

It was no ordinary summer camp, but one meant to break down divides. Staiti, a Palestinian, and her friend, an Israeli, were early participants in the Seeds of Peace program that allows Israelis and Palestinians to meet in a neutral environment.

Staiti came from the city of Jenin in the West Bank, where she witnessed the first major Palestinian uprising from 1987 to 1993 against Israel’s occupation. Her childhood was marred by military-imposed curfews and the repeated imprisonment of her politically active father. “I remember it being very scary experiences for a 6- or 7-year-old child,” she said.

When she attended the summer camp in Otisfield, Maine, in 1997, it was the first time the shy 14-year-old was away from her family and her home.

The dialogue sessions were interesting but difficult, Staiti said. “I was still really traumatized and having to talk with people I had up until now only thought of as enemies … was hard.” At first, the young people eyed each other with suspicion, but their hostility melted away over the weeks of shared space.

In one activity, a guide took a small group of campers out to the middle of a lake, and they all jumped in with life jackets. “I had never been in water before and I didn’t know how to swim,” she said. It was “exhilarating.” 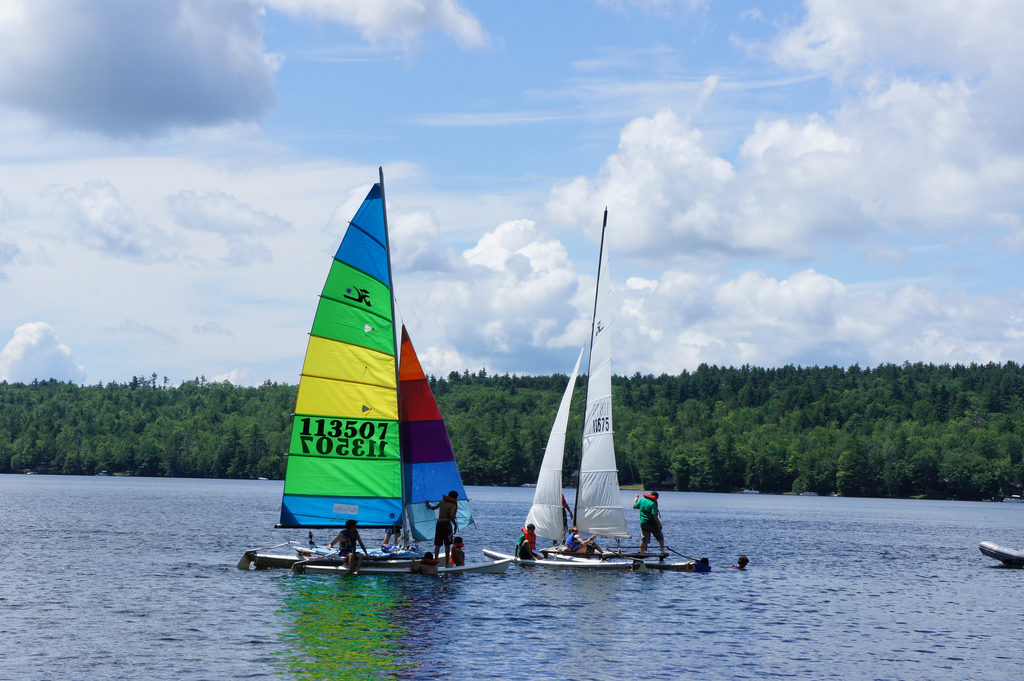 Participants at the Maine summer camp include Palestinians and Israelis, Egyptians and Jordanians. A smaller program in India and Pakistan has the same model. Photo courtesy of Seeds of Peace

Seeds of Peace started in 1993. That same year, officials of the Israeli government and the Palestine Liberation Organization signed the Oslo Accords, and it seemed like the Middle East was on the brink of peace.

“It’s a much harder thing for Israelis and Palestinians to participate in a program like this given the climate that they’re living in on the ground today.”

“It’s a much harder thing for Israelis and Palestinians to participate in a program like this given the climate that they’re living in on the ground today,” said Leslie Lewin, executive director of the New York-based Seeds of Peace. “I’m in constant awe of the courage that our participants show and their willingness to engage and step outside their comfort zones.”

The group has had to adapt by running more local programs, not just the summer camp in Maine. It now has an office in Jerusalem with 12 employees and teaches leadership skills to its alumni to carry on the work at home.

The organization also now runs programs in the U.S. — in the refugee resettlement cities of Portland and Lewiston, Maine, along with New York City, Los Angeles, Chicago, and Syracuse, New York, to help people get along. 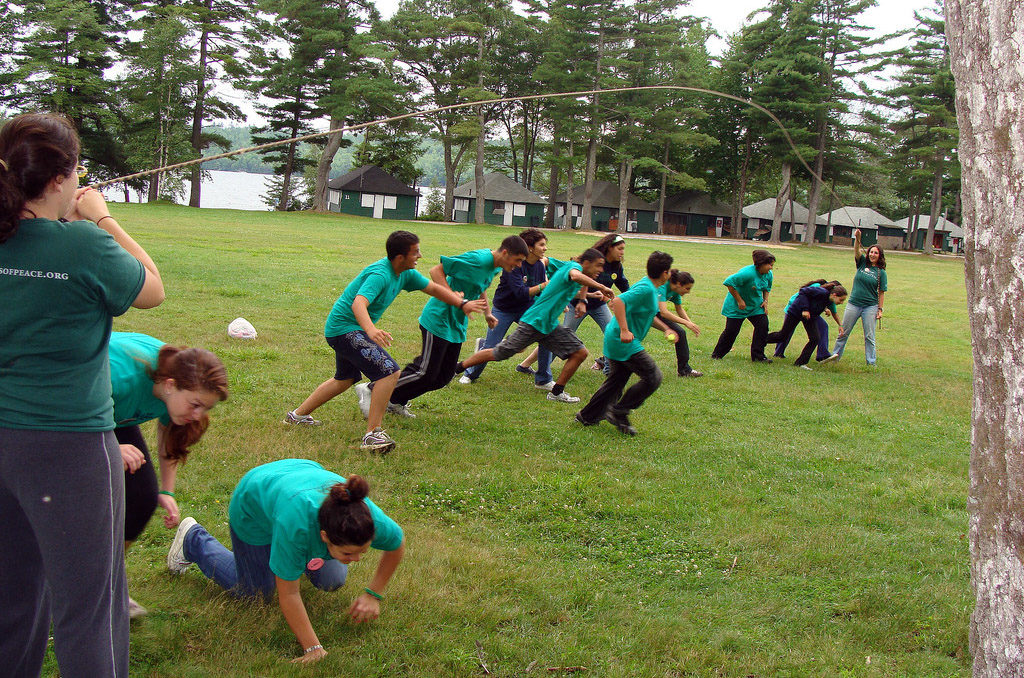 Campers eat, sleep and play games together. Photo courtesy of Seeds of Peace

Seeds of Peace has begun providing fellowships for participants to receive training in starting an organization and mentoring help to develop their own programs.

Staiti later moved to Canada to attend university, met her husband and they now live in Toronto, where she co-founded Empathy for Peace in 2016. She organizes conferences to help groups apply the latest research on empathy to their work. “We want to make sure that peace-building and conflict-transformation programs are being as effective as they can be, by being more evidence-based and incorporating the latest scientific research to either develop their programs or evaluate them so we know what’s working and what’s not,” she said.

Qasim Aslam from Lahore, Pakistan, another Seeds alumnus, co-founded The History Project in 2013 to research how textbooks teach violence. Its main program, called Beyond the Classroom Education, helps students learn empathy and critical thinking. More than 3,000 students in some 50 schools across Pakistan have participated so far.

In one lesson, instructors pit 27 students against three in a soccer match. “Just imagine the spectacle it leaves in the mind of a child of competing in a soccer match against 27,” he said. The students learn what it’s like to be in the minority and the challenges marginalized groups face.

“One of the key takeaways – something that sunk in a lot later – was that underneath the layer of nationality you will always find people who are worried about putting food on the table.”

Aslam attended the camp as a 14 year old in 2001. Seeds of Peace had just expanded its programs to include the Pakistan-India conflict, and he was one of the first Pakistanis to participate.

“Pakistan isn’t exactly a tourist destination, so most of the nationalities I met at Seeds of Peace camp – people from India, Palestine, Afghanistan – were people I was meeting for the first time,” Aslam said.

“One of the key takeaways – something that sunk in a lot later – was that underneath the layer of nationality you will always find people who are worried about putting food on the table, and they have their likes and dislikes, insecurities, everything you can imagine teenagers are going through.”

Left: Seeds of Peace was founded to create opportunities for young people to come together across lines of conflict. It’s evolved into a leadership development organization. Photo courtesy of Seeds of Peace