Making every girl equal is the mission of this club

Rocio Ortega grew up in what she describes as a “machismo” culture in East Los Angeles. “We grew up seeing the women in our families undervalued and taking on traditional roles like staying at home, cleaning and taking care of the family,” she said.

In high school, she searched the Internet for a girls’ club to discuss gender equality and feminism and found one: Girl Up.

“The sooner that adults can begin to see teenagers and adolescent girls as equals, then the faster we can move on some of these issues.”

Girl Up launched in 2010 in Washington, D.C., and partners with U.N. agencies that support education, health, social and economic programs for girls in developing countries. Its original mission was to help girls in the U.S. learn about issues affecting others their same age in other countries.

When Ortega, now 24, started her Girl Up club at age 16, she got some pushback from male teachers, who asked why her school needed it when women already are equal.

“It was first educating ourselves on these issues and then educating those around you,” Ortega said. “In my case, I noticed how much adults don’t tend to trust teenagers.”

But “the sooner that adults can begin to see teenagers and adolescent girls as equals, then the faster we can move on some of these issues.”

Former NewsHour correspondent Ray Suarez reported on the Girl Up campaign in 2011, a year after its launch.

Ortega’s club was one of the first 10 Girl Up clubs in the U.S. “It was a really fun period. They suggested conversations and fundraisers, but I had ownership and creativity over the events I wanted to do.”

Ortega, who is first-generation Mexican-American, and her friends, many of whom were from Guatemala, chose to focus their efforts on helping girls in Guatemala. They learned through Girl Up that girls in other countries, such as refugees in Ethiopia, faced similar challenges such as lack of education and rights.

So how do you tackle such big social issues as a student? Teachers friendly to their mission gave Ortega and her fellow club members class time to talk about the issues girls encounter in developing countries. They held bake sales and got proceeds from school dance tickets, and solicited donations from family and friends.

“It could be a gender bias dress code in a school district in Kentucky as much as trying to advocate against child marriage in Malawi.”

They also successfully advocated for the Girls Count Act, a law that passed Congress in 2015 to help ensure children in developing countries are registered at birth. Ensuring children, especially girls, are registered helps them access education, jobs and health services later in life. Ortega and her friends met with their local member of Congress and lobbied on Capitol Hill. It was the first time they had ever done anything like it, she said.

“It was one of those moments where you realize you’re not old enough to vote yet, but we can still do this,” Ortega said. “We can still lobby and learn more about how legislation is passed and what we can do about it.”

Eight years after its founding, Girl Up now has 2,300 clubs in 103 countries helping with leadership development and advocacy work.

The organization is working toward inspiring gender equality for all girls wherever they are, said Anna Blue, co-executive director of Girl Up. “It could be a gender bias dress code in a school district in Kentucky as much as trying to advocate against child marriage in Malawi. The idea is that none of us are equal until every girl everywhere is equal.” 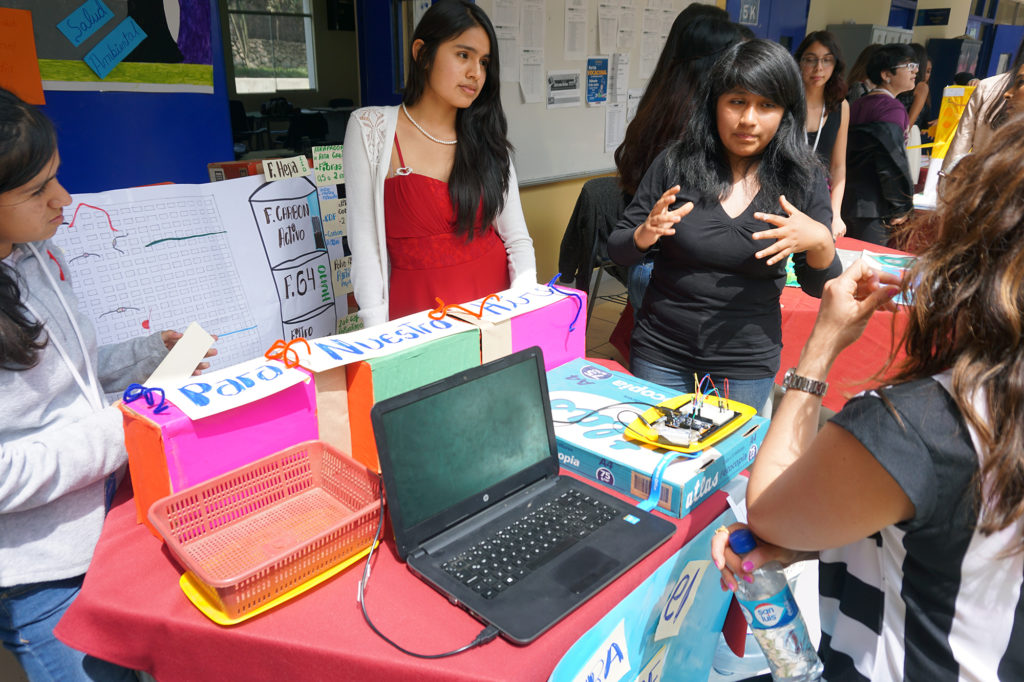 WiSci Girls STEAM Camp aims to bridge the gender gap in the fields of science, technology, engineering and mathematics through access to education, mentoring opportunities and leadership training. This camp took place in Peru in 2015. Photo courtesy of Girl Up

This fall, Girl Up is launching STEM workshops featuring technology and engineering activities through the lens of social good. Girls typically opt for careers known for helping people such as social work and teaching, and they might not necessarily make the connection of the good they can do in the fields of technology and engineering, Blue said.

The activities will help girls “think like an engineer” to solve problems in the world, said Melissa Kilby, co-executive director of Girl Up. Many of the participants might be in STEM classes in school where they are the only girl, so the events will help bring them together with others sharing their same interests in science and math, and motivate them to move forward in those typically male-dominated fields, she said.

Ortega, now an associate at Girl Up, was a counsellor at one of the first WiSci Girls STEAM Camps in 2015. She worked with 100 adolescent girls from Latin America and the U.S. at the camp in Peru to help encourage careers in STEAM if that was their interest.

“I’d rather work with adolescent girls than adults,” she said with a laugh. “They’re so much more fun to work with, you definitely pick up from their energy.”

Left: Girl Up promotes the health, safety, education and leadership of girls in developing countries. Photo by Stuart Ramson for U.N. Foundation