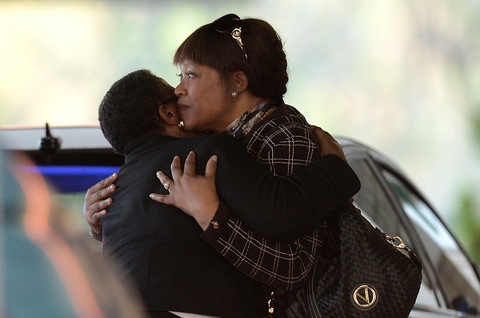 Nelson Mandela’s daughter, Zindzi Mandela (right) hugs an unidentified person on June 26 outside the hospital in Pretoria where her father is being treated for a lung infection. Photo by Filippo Monteforte/AFP/Getty Images.

Zindzi Mandela, the daughter of ailing former South African President Nelson Mandela, said her family has not given up hope on his recovery. “He’s a strong man. He’s about resilience,” she told NBC special correspondent Charlayne Hunter-Gault by telephone on Thursday.

Referring to her father as “Madiba,” the name of his clan and a term of endearment for the national hero, Zindzi Mandela said: “He’s not wanting to go anywhere, anytime soon.”

Mandela’s daughter told Hunter-Gault that her father is “continuing to improve” and described her visit with the former president on Wednesday.

“He was very comfortable and was responding as I was chatting to him,” said Zindzi Mandela. “Madiba opened his eyes, smiled at me, you know, reached out for my hand.”

The 94-year-old anti-apartheid leader was hospitalized in Pretoria, South Africa, with a lung infection on June 8. He took a turn for the worse last weekend, but South African President Jacob Zuma said Thursday after visiting him that his condition had improved overnight, though he was still listed as critical.

“We remain upbeat and hopeful and we are very grateful to all the prayers and the support and the love we are getting from everybody,” Zindzi Mandela said.

She added that her father’s condition is “typical of a 94-year-old man, you know, whose health is frail.”

President Barack Obama is touring sub-Saharan Africa this week, making stops in three countries: Senegal, South Africa and Tanzania. The White House has said he would defer to the family on any possible meetings with Mandela.

When asked if the family would welcome a visit from President Obama, Mandela said she wasn’t aware of a formal request from the president, but it would be up to his doctors to allow it.

“I know for a fact my father is fond of President Obama,” she continued. “They met before when he was still a senator and he responded to me very positively the other day when I said to him, ‘Obama is coming.’ I had been chatting to him about a whole lot of stuff that I suppose he found quite boring probably just slept throughout but when I spoke about President Obama, his eyes just flew open and he just gave me the sweetest, most gentle smile.”

Charlayne Hunter-Gault was a correspondent for the PBS NewsHour from 1977 to 1997. View all of our World coverage.