WHO: ‘Many thousands of new cases’ of Ebola expected in Liberia

In a way, the use of motorcycles is a sign of how convoluted the struggle with Ebola has become.

In early September, the World Health Organization donated two dozen motorcycles to the Ministry of Health in Guinea, one of the countries hit hardest by the Ebola virus. A week later, WHO said motorbikes used as taxis were one of the ways Ebola was spreading in Liberia.

Health workers in Guinea, Liberia, Sierra Leone and other affected West African nations need an easy way of traveling to track down how individuals are infected and to help shut down the routes of transmission. As for the motorbike taxis, they were helping spread the disease because the bikes were rarely disinfected between passengers.

The finding on the taxis came from a team of WHO investigators who were in Liberia — considered the epicenter of the disease — working with the Ministry of Health, local health personnel and partner organizations. About half of the region’s 3,500 Ebola cases are in Liberia, and nearly all of Liberia’s counties have confirmed cases of the deadly virus, the team said in a statement on Monday. The fatality rate in Liberia is among the highest at 58 percent.

“The demands of the Ebola outbreak have completely outstripped the (Liberian) government’s and partners’ capacity to respond,” the statement said. “As soon as a new Ebola treatment facility is opened, it immediately fills to overflowing with patients, pointing to a large but previously invisible caseload … Many thousands of new cases are expected in Liberia over the coming three weeks.”

Updated on Sept. 9 with chart of Ebola cases, showing a jump from past 21 days: 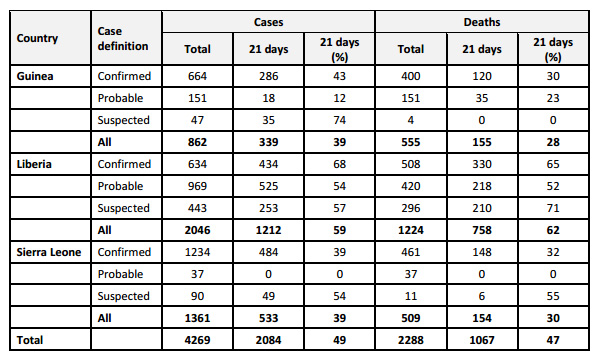 Ebola cases as of Sept. 8, 2014. Chart by World Health Organization

The team assessed the conditions in Montserrado county, which includes Liberia’s capital Monrovia. It estimated that 1,000 more beds were needed at Ebola treatment centers to add to the 240 beds that are currently available. About 200 to 250 medical staff members are needed for each 70-bed facility.

WHO investigators said conventional ways of trying to stop Ebola that appear to be working in other countries are inadequate in Liberia because of the aggressive infection rate.

Compounding the problem is that the early symptoms of Ebola are similar to those of common infectious diseases – fever, headache and general weakness – putting medical staff at high risk of exposure. Dozens of health care workers have died in Liberia alone.

Left: The World Health Organization handed over 24 motorcycles to the Ministry of Health in Guinea the first week in September to support Ebola contact tracing activities in eight districts in the country. Photo by A. Pallangyo/WHO