Khanyisile Mavimbela was five months pregnant in 2008 when she took a test and learned she had HIV.

“My birth was just a few months away,” she recounted recently. “I was very scared and worried I would infect my baby with the virus.”

When Mavimbela, who was living with her parents in Tikhuba village in eastern Swaziland at the time, told her mother what was wrong, “she never judged me” and urged her to pursue treatment. Her partner, on the other hand, wouldn’t talk to her about it.

But someone who did offer her a compassionate ear and was able to provide her information on treatment was a Mentor Mother with mothers2mothers, a nonprofit organization that pays local women in African communities to be educators and counselors.

The mentors, who have HIV themselves, help pregnant women who have undergone HIV testing learn how they can get treatment for themselves and prevent HIV being transmitted to their babies.

“I was surprised to see a healthy-looking mother who was also living with the virus. And she told me it was possible to protect my baby,” Mavimbela, now 35, said. “At first I didn’t believe her. But she encouraged me to accept the results and promised she would be there with me. I was a frequent visitor at the clinic just to see the mentor mother and talk to her, and that kept me going.”

Mavimbela started taking antiretroviral drugs — which she will need to continue throughout her life — and delivered a healthy, HIV-negative baby.

She decided to become a Mentor Mother, too. “I felt like it was my way of giving back to the program. I felt I should also help other mothers like me.” 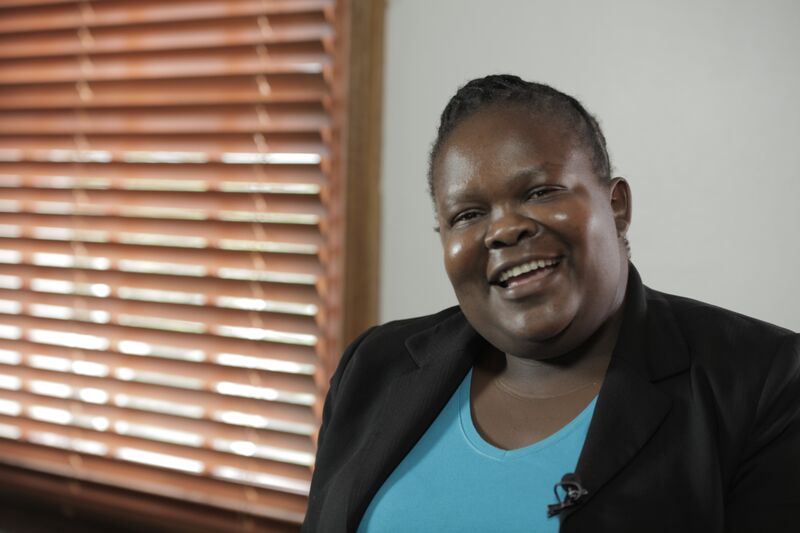 Khanyisile Mavimbela is one of the Mentor Mothers who works at the Tikhuba clinic in Swaziland. Photo courtesy of mothers2mothers

Because Mavimbela lives and works in the same community, the women can relate to her better and her information feels more authentic to them because she is undergoing the same treatment. “They know my kids, they know how I brought up my kids and they see me coming to the same clinic to get my medication,” she said.

The six nations are among 22 countries identified by the World Health Organization as having the highest estimated number of pregnant women with HIV. In 2011, WHO and UNAIDS intensified efforts to prevent mother-to-child HIV transmission by working with other partner organizations to test pregnant women for HIV and start them on antiretroviral drugs if they test positive.

Transmission rates, which normally range from 15 percent to 45 percent without interventions, can dip below 5 percent with treatment, according to WHO.

The agency also recently released new guidelines saying antiretroviral treatment should begin as soon after a diagnosis as possible.

Swaziland in particular has one of the highest HIV rates in the world with 26 percent of 15-to-49 year olds infected, according to a UNAIDS country report for 2014. Women have a higher rate at 31 percent compared to men at 20 percent. Preventing new HIV infections is one of the country’s goals.

Mothers2mothers is one of about 30 civil society and private sector groups helping with education and counseling in the broader effort.

Mavimbela said one of the challenges she faces on the job is getting clients to bring their identification cards to every clinic visit, which is the only way their treatment can be tracked if they go to another health facility.

Also, it can be difficult to get the woman’s partner to come to the clinic for testing or treatment. So Mothers2Mothers recently began sending the Mentor Mothers into the community rather than waiting for people to come to them.

Mavimbela said since that new program began, she noticed more people are sticking with the treatment and seeking help earlier in their pregnancies.

Mavimbela, who now has a second daughter also HIV-free, is one of two available Mentor Mothers in her village, which means she’s never off the clock. Clients “come (to her home) anytime whenever they have a difficulty or question,” she said. “They look to me as someone they can rely on for help. … I want to make sure that every child who’s born is born HIV-negative in my country.”