Mother on Nigeria abductions: Each missing girl ‘is like my own child’

When more than 200 teenage girls were abducted from their boarding school in Nigeria last month, Angelina Atyam knew firsthand the anguish the parents were feeling.

In 1996, her daughter Charlotte was kidnapped at age 14 with dozens of other girls from their high school in Aboke, Uganda, by the Lord’s Resistance Army, a Christian militant group that has been fighting the Ugandan government since the mid-1980s.

For nearly eight years, Atyam hoped and prayed for her release. After being held by the militants and forced to be the “wife” of one of the LRA’s leaders, Charlotte was able to escape in 2004 and was reunited with her mother. Charlotte, who is now in her 30s and has two children, is back at school in Uganda.

While her daughter was missing, Atyam and other parents of the 139 abducted girls founded an organization called the Concerned Parents Association-Uganda, based in the northern city of Lira, with the mission of educating children and developing conflict-resolution projects. Atyam, 65, said she retired from the organization last year because of ill health.

She also helped start another nonprofit, the Concerned Children and Youth Association-Uganda, a child-advocacy group working toward the release of all children by the LRA and their reintegration back into society. She remains a board member there.

When she heard about the abductions in Nigeria, Atyam said she called the Concerned Parents Association to see if they could set up a meeting with the parents of the kidnapped girls in Nigeria. They are planning to mobilize this weekend to do so.

“We cannot afford to let the parents of the girls suffer alone when we have some consolation words that we can give them,” she said. 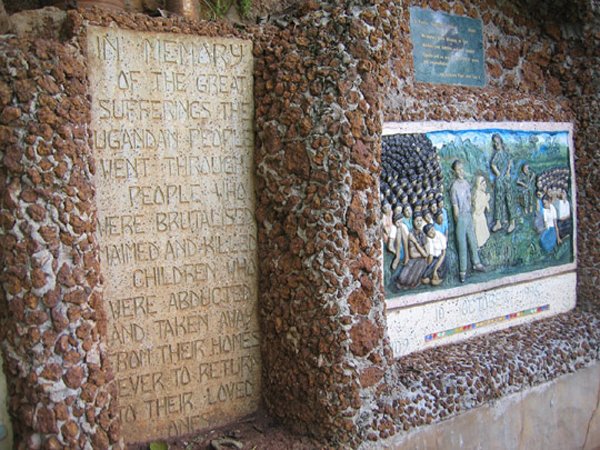 A stone marker at St. Mary’s College in Aboke, Uganda, memorializes the children abducted by the Lord’s Resistance Army. Photo by Sudarsan Raghavan/MCT/MCT via Getty Images

Atyam said she would tell the parents: don’t give up. “They must keep talking about it, raising the issues locally, nationally, regionally, internationally. … We will be pressing the same thing. We would like to go with them and share our experiences, our pain with them. We know what they’re going through.”

She said although some of the missing children eventually come back, that is not the end of the problem of abductions by rebel groups in both countries and elsewhere.

“Our slogan is ‘every child is my child,’ so all the missing girls — each of them — is like my own child.”

The case of Nigeria’s missing girls, ages 16-18, has drawn international attention, launching rallies by advocacy groups and a #BringBackOurGirls campaign on Twitter.

President Obama said this week the United States would send help to find the girls in Nigeria and in the longer term deal with Boko Haram. Britain and France promised to send agents to Nigeria as well. The United States also has joined Ugandan forces in the hunt for Lord’s Resistance Army leader, Joseph Kony, who is wanted for war crimes and crimes against humanity by the International Criminal Court.

If she could speak to the rebels, Atyam said she would say, “Why go after the children, those who cannot fight? Give us our children back. It’s cowardice to go after a child. If you are strong men, go fight your own war. Children are not meant for war.”

Left: Students at St. Mary's College in Aboke, Uganda, where 139 girls were kidnapped by the Lord's Resistance Army in 1996. Photo, taken on Sept. 30, 2004, by Sudarsan Raghavan/MCT/MCT via Getty Images