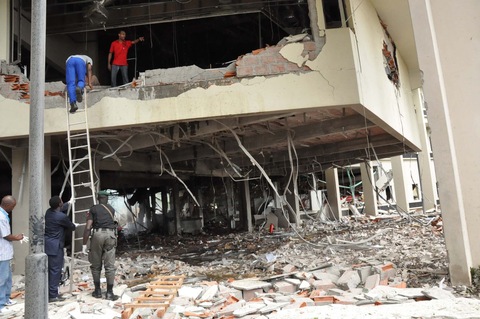 A car bomber broke through two gates and detonated his explosives in front of a U.N. building in Nigeria’s capital Abuja, killing at least 18 people Friday.

The radical Muslim group Boko Haram claimed responsibility in a phone call to the BBC’s Hausa language shortwave radio service in northern Nigeria — the same way it had taken credit for attacks in the past.

The northern-based Boko Haram, whose name in English means “Western education is forbidden,” is seeking to establish strict Sharia law in the country.

Friday’s attack was the first on a U.N. — or any international — building by the group, which usually targets Nigerian government installations or security forces, said Comfort Ero, International Crisis Group’s Africa program director, who is based in Nairobi, Kenya. Boko Haram’s past attacks include the June bombing of police headquarters in Abuja, which killed six people.

President Obama called Friday’s attack “horrific and cowardly” in a statement. “An attack on Nigerian and international public servants demonstrates the bankruptcy of the ideology that led to this heinous action,” he said.

The group’s possible links to al-Qaida, further suspected after the attack on a Western-based and international body, has put it in the orbit of U.S. interests. Nigeria also supplies the United States with 10 percent of its oil imports, and the United States is its largest customer of crude oil.

In July, the government of President Goodluck Jonathan formed a “negotiating committee” to deal with Boko Haram’s grievances and the bombing attacks. The government also has said it would investigate reports of abuses by the army in fighting the Islamist group.

But despite these moves, the government’s crackdown on the group intensified, and the threat from Boko Haram also grew in the past few months, Ero said.

Nigeria’s long-standing tensions between the mainly Muslim north and mostly Christian south ignited in violent protests in April after President Jonathan, a Christian, was elected and the candidate favored by many Muslims lost.

Deep-seated economic and employment inequalities are further destabilizing the country of 155 million, said Ero. “Particularly where Boko Haram hails from, the north suffers from a potent mix of economic malaise and contentious community-based distribution of resources.”

All of these factors are churning in Nigeria as attacks are now taking an international bent, she said.