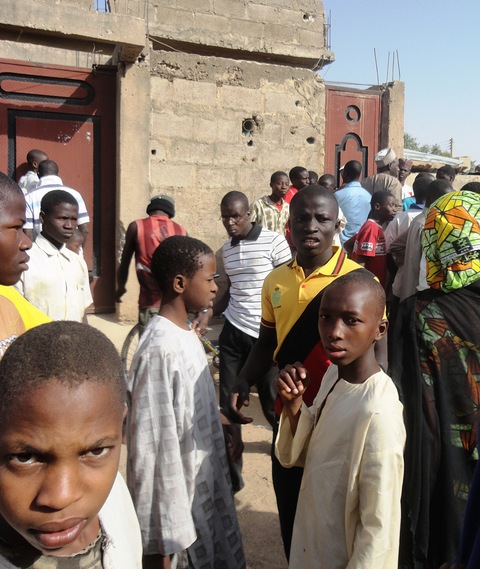 Residents of the Tsamiyar Boka neighborhood of the northern Nigerian city of Kano. Photo by Aminu Abubakar/AFP/Getty Images.

Nigerians not only are bracing for further attacks by the hard-line Islamist sect Boko Haram, they’re also worried that disenchanted poor youth in the northern city of Kano might be drawn to the radical group.

GlobalPost’s correspondent in Nigeria, Gillian Parker, visited Kano to see how the city was faring after a series of car bombs on Jan. 20 left 185 people dead.

“People are very resilient. In many countries that are experiencing terrorism, you just have to get on with it,” she told us by phone from the capital, Abuja. In Kano, people were walking on the streets or in the markets as usual. “They were just getting on with it, getting back to work.”

Last month, Nigerians protested high fuel prices and a government plan to lift oil subsidies, which it later reversed. Nigeria, the most populous African country with 155 million people, supplies the United States with one-fifth of its oil.

The strikes and protests left a gap in people’s income, Parker said, so “I think they were quite keen to get back to work in Kano and not let the bombs obstruct their daily lives.

“That said, I think there is a very palpable feeling of fear in the city,” she added.

The Nigerian government is struggling to contain the insurgency. The country’s State Security Service said Wednesday it had captured a spokesman for Boko Haram. But news outlets reported that the same agency had made similar claims weeks ago with someone who was only loosely affiliated with the group.

Some fear the Boko Haram attacks are leading to reprisal killings. After the coordinated bombings in Kano, Nigerian security forces killed two people in what police called an effort to root out members of Boko Haram. Neighbors said those killed were just ordinary civilians.

Parker said new security measures are in place, including cement barricades around buildings, bomb checks of vehicles at hotels and heightened check-out procedures for children at schools. “People are extremely cautious and they are worried about where this is going to go,” she said.

In Kano, where the gap between the rich and poor is more pronounced than in Abuja, Parker said there are concerns that boys and girls living in the streets will be drawn to Boko Haram and its goal of instilling Sharia law.

“The youth in the streets in Kano are vulnerable to being brought under Boko Haram’s wing,” she said. “They’re searching for a purpose and a sense of belonging.

“These are boys who have been on the streets for years, begging. They see the elites with all this money, and they’re living in poverty with no hope. It’s probably easy for Boko Haram to gain support from them,” Parker said. And that leads to concerns that the group might be able to gain a stronghold in Nigeria’s second-largest city, she said.

The government’s efforts to clamp down on Boko Haram are hampered by the group’s underground tactics and hard-line members’ unwillingness to negotiate, said Parker.

“It’s sad for Kano,” she added. “Most people are very peaceful. They don’t want this in their city.”