Armed with a map and other tools, Nigerians push for peaceful elections

Persisa Yawa is a 64-year-old women’s rights activist in Nigeria’s central Plateau State, which is known for its waterfalls and safari parks. But of late it’s become an area of Muslim-Christian clashes.

Yawa said she is concerned about people’s safety during elections later this month, but she still plans to vote. “Nigerians are good people and my country is good. There is freedom of expression.”

Nigeria has a history of military coups and corrupt and violent elections. With another presidential election coming on March 28, one of the groups working to head off the violence is Search for Common Ground, based in Washington, D.C., and Brussels.

“People resort to violence when they think nobody is listening to them and there are no alternative ways to present their problems and get solutions,” said Chom Bagu, Search for Common Ground’s country director in Abuja, Nigeria.

Not helping matters was the decision by the government under President Goodluck Jonathan of the People’s Democratic Party to postpone elections from Feb. 14 because of the drain on security capabilities due to the ongoing battle against the Islamist insurgency group Boko Haram.

“It is unclear whether a six weeks’ delay will help the Nigerian army combat the threat from extremist groups such as Boko Haram, which it has been trying to stop for several years,” said anti-corruption organization Transparency International.

“A lot of work has been done to calm people (since the decision to delay), but increasingly their patience has been taxed,” said Bagu.

Elnathan John, an author and blogger who lives in Abuja, said people are worried about corruption and vote-rigging occurring again in this year’s elections.

“The army and other security forces need to be nonpartisan and diligent in preventing the subversion of the electoral process,” said John. “This is even more crucial because there is already a lack of trust of the security forces.

“Violence has already begun happening in certain parts of the country and the expectation is that this violence will peak right before and after the elections,” he said.

To identify potential flashpoints, Search for Common Ground launched a crowd-sourced online map where people can record incidents of voter intimidation, harassment and fistfights. The map is meant to help grassroots groups mobilize quickly to tamp down on violence before it can spin out of control.

The map covers the entire country but focuses on 10 high-risk states: Bauchi, Bayelsa, Borno, Delta, Kano, Plateau, Rivers, Kaduna, Adamawa and Yobe. Entries on the map include reports of vandalized campaign offices, confrontations between political supporters, and gunfire at rallies. 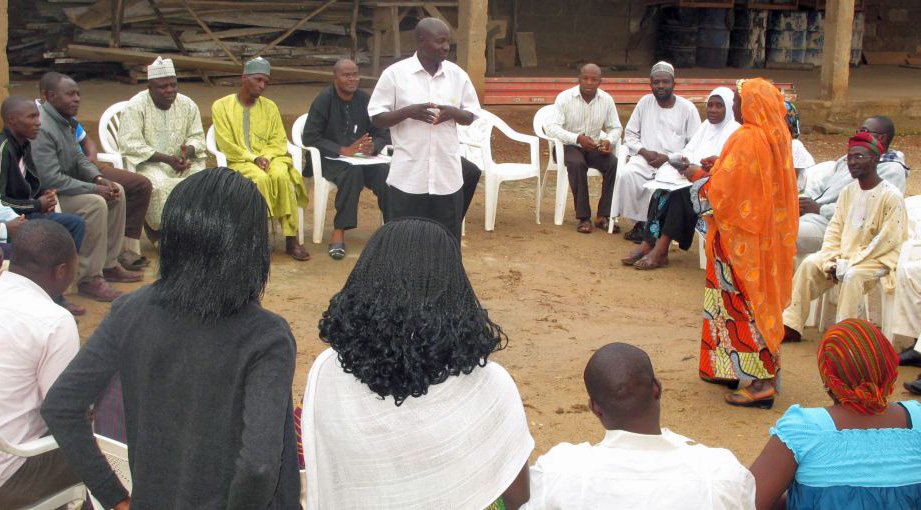 A trauma-healing workshop in Nigeria held in the summer of 2012. Photo courtesy of Search for Common Ground

The group has organized meetings in these high-risk areas to hear people’s grievances and instruct them on how they can better communicate their complaints.

For Yakubu Musa Pada, 25, a student in Jos East in Plateau State, those woes include youth unemployment, which he asserts “poses a serious danger to the growth of the nation.”

But he said he maintains a strong sense of national pride. “Nigeria is one country that the law is not too strict,” he said of its appeal.

Another Plateau State resident, teacher Gerald Longlat, 43, said he will be voting for a “corruption-free government” in his home country, where he enjoys “the beauty of our diversity.”

Longlat said the participation of groups like Search for Common Ground will help make the election process more credible. “It is (doing) what the government should be doing.”

Search for Common Ground has a staff of about 50 in Nigeria, where the group has been operating since 2004. Its other projects in Nigeria include Naija Girls, a summer camp in the religiously segregated Plateau State that allows Christian and Muslim girls to intermingle.

“They haven’t had the opportunity to get out of the city and have an environment where they can talk,” said Mike Jobbins, Search for Common Ground’s senior program manager for Africa. “If they become champions of peace and nonviolence, they can really shock the community because it’s coming from an unexpected place.”

Search for Common Ground has projects in dozens of other countries that are meant to promote understanding and eliminate conflict. Its work is funded by U.S. and European governmental agencies, foundations and individual contributors.

“Nigeria is a place where people are grappling with some of the biggest questions in the world right now,” said Jobbins. Although the nation of 177 million is rich in oil revenues, it has pockets of deep poverty. And in the north, where Boko Haram is trying the wrest control from the government, the militants have abducted schoolgirls, destroyed towns and killed indiscriminately.

But Nigeria is also “a place that’s dynamic, people are quite energetic, and there’s a real desire and capacity for change,” he said. “There’s not a need for outside solutions, the solutions are right there. It’s just how we can work with people to have those ideas come forward.”

Left: Nigerians spread a non-violent message ahead of the presidential elections on March 28, 2015. Photo courtesy of Search for Common Ground