ISLAMABAD, Pakistan | From his veranda, cricket player-turned-politician Imran Khan recently told a group of visiting U.S. journalists that if he were in charge of Pakistan, he would introduce a streamlined, non-corrupt government and withdraw all troops from Pakistan’s troubled tribal regions from “day one” in office.

Khan is hoping his Pakistan Tehreek-e-Insaf (Pakistan Movement for Justice) party secures enough seats in upcoming parliamentary elections to make him prime minister, which in Pakistan is the head of the government. Elections are due in May 2013 but could take place sooner.

While Khan generally is applauded in the country for rejuvenating an electorate weary of government corruption scandals, some analysts say his current surge of popularity is no guarantee he will win on election day.

“Lately, they have been able to assemble huge crowds at rallies, and public opinion polls also indicate that they may be the second or third most popular party in the country at the moment. But it remains to be seen what the situation will be when elections take place,” said Ahmed Bilal Mehboob, executive director of the Pakistan Institute of Legislative Development and Transparency, a nonpartisan democracy advocacy group.

Nonetheless, Khan’s supporters say the telegenic candidate is a welcome change to politics as usual and offers an alternative to the two main parties, the Pakistan People’s Party and the Pakistan Muslim League – Nawaz. Conversely, his critics say he doesn’t have enough experience in politics and that he hasn’t laid out specific action plans to solve Pakistan’s problems.

@NewsHourWorld when will he start backing his grand statements such as ‘PTI will end corruption in 90days’ with realistic action plans?

We posed this and other questions to Khan. His quotes are below with audio of his fuller answers:

What is your specific plan to rid Pakistan of government corruption?

“All our central executives are going to declare all their assets and put them on our party website. So start the accountability process from ourselves. We hope to then have every government servant in Pakistan — public servant — will have to declare their assets and it will go on the website.

“Then, have an independent accountability bureau. At the moment, the NAB (National Accountability Bureau) is appointed by the government. What we hope is that we will have a NAB of people of credibility with their own staff, with their own secretariat, but with constitutional protection.

“Politics is a big business. The best way to make money is to come into politics, either through corruption or you can just use state resources to make money. So you have to have a conflict of interest law.

“And then a local government system — this is the most important thing. Have a proper local government system, which has never existed in Pakistan. Seventy percent of our population in rural areas have a proper system — fund them directly. So not centralized funding, de-centralized funding. And this would be a revolution here because it would completely break down the feudal culture.”

Listen to more of Khan’s answer: 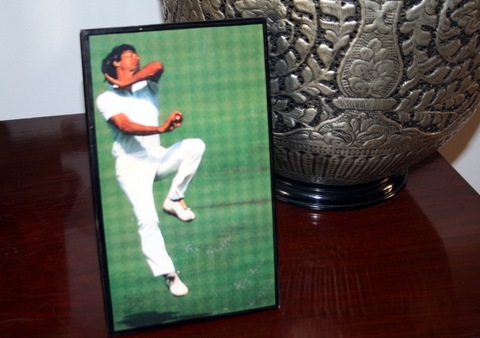 Khan displays one of his cricket-playing photos in his house in Islamabad. He led the Pakistani team to its only World Cup win in 1992. Photo by Larisa Epatko

How will you get Pakistanis to pay taxes?

“You’re talking about the biggest problem — the revenue issue. Here is a country that gives the highest amount of charity probably in the world and gives the least amount of taxes.

“People don’t trust the government with their taxes. Their taxes are squandered. If you look at the lifestyle of our ruling elite … you cannot imagine the opulence they have. You would think Pakistan is a very rich country. … People do not want to pay taxes to them. So you have to do two things: first, you have to tax all incomes. All the sacred cows must be brought under the tax law.

“Second, you have to inspire people to give taxes. … Total austerity of the lifestyle of anyone who is in government, and making people feel that their taxes are being spent on them.”

Would you work to improve relations with the United States?

“After this last election, (the U.S.) should never interfere with Pakistan’s election process. They should just say whoever comes through free and fair elections, we’ll have a relationship with them.

“Pakistan should never take aid from the U.S., because you cannot have a relationship where you beg and borrow from another country and expect respect from them. It should be a relationship based on — from our point of view — dignity and self-respect.

“If we’re in power, the only thing I would expect the U.S. to expect from me is that there should be no terrorism on Pakistani soil. How we do it would be our way. Surely, for the U.S. that’s really what should be of main interest.” 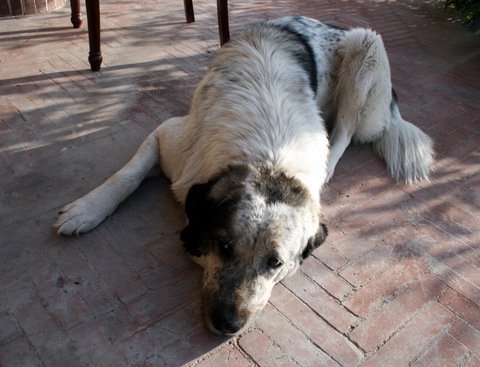 Khan’s dog, Sherni, makes her presence known during parts of the interview. Photo by Larisa Epatko

How would you eliminate terrorism in Pakistan?

“Day one, I would withdraw my troops (from the tribal areas).

“The ideological element in this war on Pakistanis’ side is barely 4 or 5 percent. Ninety-five percent of the people who are fighting are our own tribal people who have revolted against our army through collateral damage.

“So how to win the war? Win them over to our side. You need truth and reconciliation — you don’t need more bombs. This will go on for another 50 years. This will not end. Whenever there’s a military action: collateral damage, more militants.

“As long as the Pakistan army is perceived to be fighting as a hired gun of the U.S. … the militants have declared a jihad on America and its agents. What we have to do is we have to say look, end of fighting, a sovereign government, no more fighting America’s war. What will that do? End of jihad.

“I’ll tell the U.S. that ‘listen, help yourself and help us, because neither you are winning nor we are winning. All you are doing is you’re creating militants.’ Pakistani is a more polarized society now eight years down the line than it was eight years ago.

“We have more radicals in this society. I am considered probably the only nationalist who has credibility here. I’m petrified. If I utter one word, which could be perceived as anti-Islamic or anti-jihad, one word, my life is at risk.”

This Q&A is part of a series of online reports on Pakistan. Larisa Epatko participated in a Pakistan-U.S. journalists exchange program operated by the East-West Center.

Left: Imran Khan is the head of the Pakistan Tehreek-e-Insaf party, which boycotted elections in 2008 but is running in upcoming parliamentary elections. Photo by Larisa Epatko