KARACHI, Pakistan | There’s a bridge in Karachi called “Native Jetty” where people go to jump to their deaths. Others frequent the same spot to toss dough balls into the water for luck.

This juxtaposition of hope and despair is just one of the contrasts in Karachi — and in Pakistan as a whole.

On one Saturday in March, this normally bustling port city of about 15 million people was oddly quiet: gates covered storefronts, a few cars rattled along the usually congested roadways, and most people stayed indoors.

The city’s dominant political party, the Muttahida Qaumi Movement, or MQM, had called for a strike or a “day of mourning” for five party members who were shot and killed several days earlier. It was all part of a recent spate of retaliatory killings between political parties. These parties represent the area’s different ethnic groups and are jostling for control.

But by the next day, life had returned to normal. Businesses reopened and people scooted across streets surging with buses, donkey carts, and goods-laden trucks.

At Karachi’s Sunday Bazaar, Ayela Najeeb, 15, ate lunch in the food court with her family. She said she’s affected by the strikes, which can occur up to 60 days a year, when her high school has to close. “My school is in the hub of Karachi,” she explained, “so that’s where all the violence starts.”

The closings influence her studies, including her favorite subjects English and physics. Najeeb said she wants to become a lawyer someday to “tell the world with my little voice what’s wrong and what’s right.” (Read her blog.) 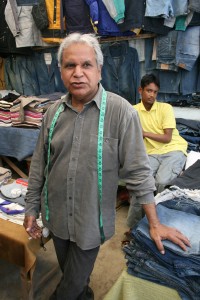 For Mubarak Ali, 53, a clothing vendor at the bazaar (pictured at right), the strikes mean losing a day of business, and “you never know when a strike will happen.”

Compounding shopkeepers’ problems, he said, is the “protection money” that different political parties demand, which further cuts into profits. After moving back to Karachi from Spain two years ago, Ali said he doesn’t like the direction the city is going and is planning to return to Europe in a few months.

When asked about the strikes, Syed Mustafa Kamal, a senator with the MQM party, said the “days of mourning” were necessary as a peaceful way to alert those outside Karachi of the violence against the party’s workers and supporters. He added that the strikes are voluntary.

Kamal also flatly denied that MQM asks for bribes, even though taking bhatta (extortion money) is considered the system of Pakistan, he said.

“Why do I have to take bhatta?” he asked. “We (MQM) own the city” and could have taken kickbacks from much larger operating funds. “If my party is so interested in taking bhatta, I would take these kickbacks, right? … Why should I go for these small jobs?” But if he had engaged in extortion, Kamal added, he would be either in jail or left the country.

When people in the MQM take matters into their own hands and are identified as criminals, disciplinary action is taken against them and they are ejected from the party, said Farouk Sattar, a member of Parliament for the MQM. But it’s not the job of the MQM party — rather that of the current government in power, the Pakistan Peoples Party, and the army — to curb extortion in Pakistan, he said.

Energy Shortages Bleed Into Other Areas

The lack of reliable electricity is another problem in Pakistan that seeps into all aspects of daily life. Residents can go for hours without electricity. If they can afford it, they use generators during the gaps in supply. 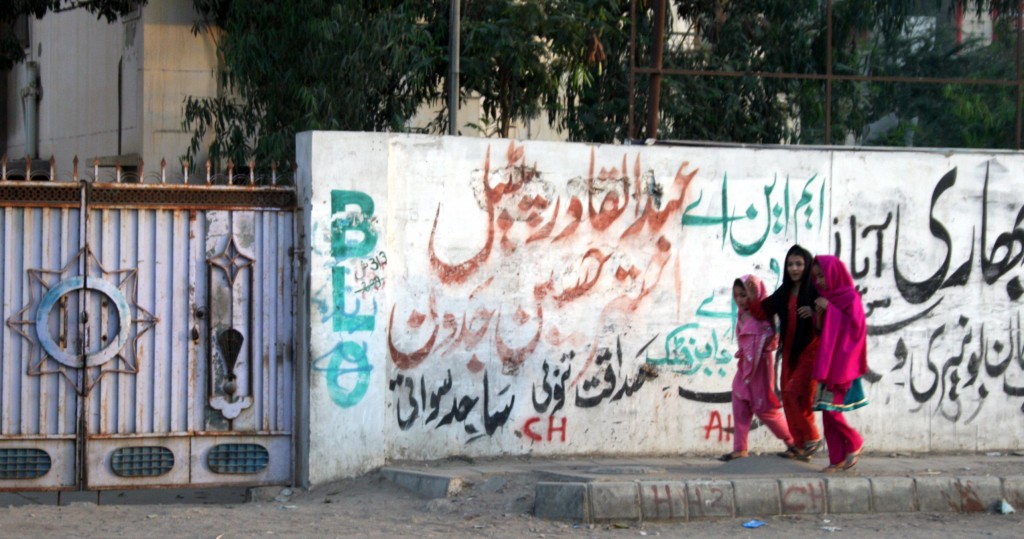 Girls walk by a wall of graffiti in Pakistan’s port city Karachi. Photo by Larisa Epatko

However, these days the cost of diesel for the generators has risen to about $6 per gallon, which limits usage among poorer residents. And the increased cost of fuel translates into higher prices for basic necessities such as food.

“Almost one-half of our population is food insecure,” said Abid Qaiyum Suleri, executive director of the Sustainable Development Policy Institute based in Islamabad. He said other developing nations face food crises, but Pakistan has additional problems including a weakly functioning democracy, militancy and terrorism in the eastern and western frontiers, and unpredictable weather punctuated with monsoons and flooding.

Pakistan is hoping for technological help from the United States and the international community to enhance its civilian nuclear energy program. But in a country where al-Qaida leader Osama bin Laden was found — in Abbottabad, about 30 miles from the capital Islamabad — it appears unlikely, said Suleri.

“No administration in the world would have confidence in the Pakistani government for using technology only for civil energy purposes,” but such help is desperately needed to keep the economy rolling, he said.

International aid in general is a controversial matter in Pakistan. The United States has sent more than $24 billion in direct aid and military support to Pakistan since 2001, according to the Congressional Research Service. (View a breakdown from the CRS.)

But many Pakistanis believe the aid contributes to a “transactional” relationship with the United States and creates a culture of dependency.

M. Iqbal Shekhani, chief executive of Culligan Water of Pakistan, who was born in India and migrated to Pakistan at age 9, said he thinks the United States should end all aid to Pakistan.

“Let the Pakistanis help themselves because every time something goes wrong, they go to the United States” for more help, he said. “In a country that can make a nuclear bomb, it can do anything.”

A system of taxation that exempts large sectors of the economy, including agriculture and real estate, means little revenues are generated within the country. And people are less motivated to pay taxes when they don’t have reliable public services.

Even though taxes are low, and possibly because of that, Pakistanis are inclined toward charitable giving. Ahson Rabbani, chief executive officer with the i-Care Foundation in Karachi, said Pakistanis give an equivalent of about 1.5 percent of the country’s GDP for philanthropy, a figure cited in this 2002 report.

Despite switching only years ago from military to civilian rule, and a continuing struggle to provide basic public services and control pockets of battling militants, the social fabric of Pakistan remains strong. 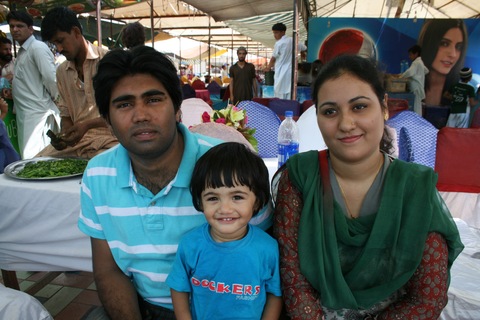 Syad and Sara Ishtiaq and their one-and-a-half-year-old son.

Sara Ishtiaq, 21, a housewife in Karachi and mother of a toddler son, summarized what many Pakistanis value about their life.

“There’s so much pollution over here,” she said through a translator. “We have money problems, and there’s terrorism. Conditions are getting worse, like the strikes. But this is our home. All of our relatives are here. You can have a nice life here.”

Larisa Epatko traveled to Pakistan as part of the East-West Center’s Pakistan-U.S. journalists exchange program. See more reports from Pakistan and photos of the trip.

Left: A man and his sons regard the city of Karachi in southern Pakistan. Photo by Larisa Epatko