Red flag-draped rallies in Moscow marked the 100th anniversary of the Russian Revolution on Tuesday. But despite the demonstrations, the crimes of the past and faded memories have made some Russians ambivalent about the centenary.

Nov. 7 is the centennial of the second of two revolutions in 1917, called the Bolshevik movement, which overthrew the provisional government that had ended the tsarist autocracy eight months earlier and gave birth to the Soviet Union. 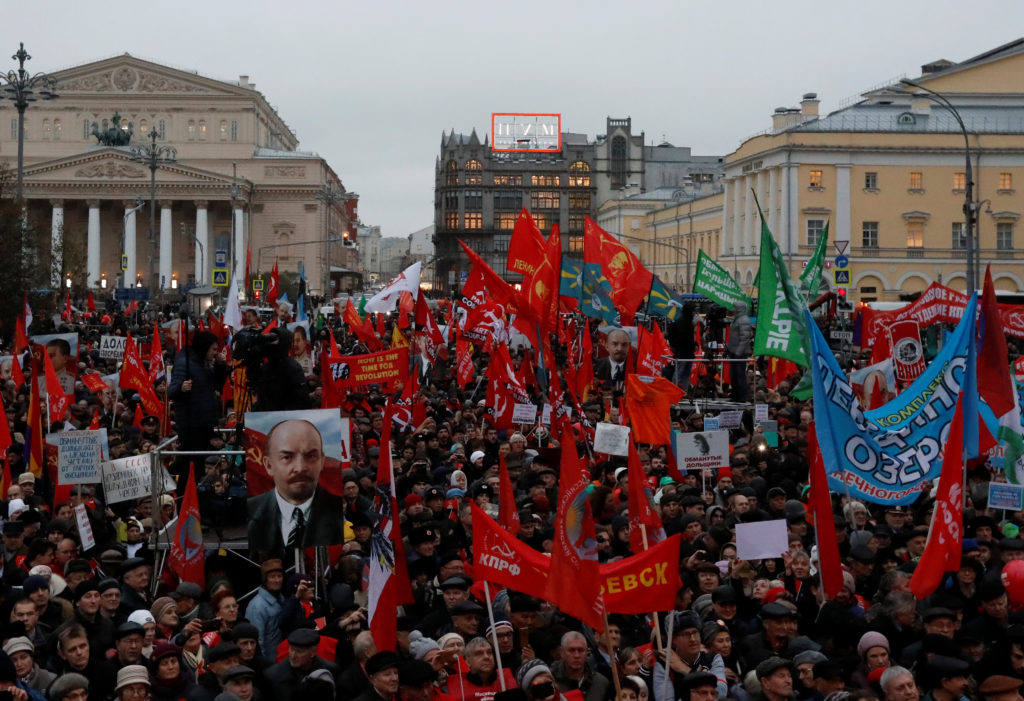 Demonstrators attend a rally held by the Russian Communist party to mark the Red October revolution’s centenary in central Moscow on Nov. 7. Photo by Sergei Karpukhin/Reuters

“A century on, the world is still discussing the consequences of the Bolshevik Revolution. But in Russia no one seems the least bit interested,” as the memories fade and Russians are more concerned about their daily lives, writes Oliver Carroll, Moscow correspondent for The Independent. Or as a columnist for RT put it, “Westerners are more into” the nostalgia around the historical events than Russians.

Last month, Russian President Vladimir Putin unveiled a Wall of Grief sculpture that remembers the hundreds of thousands of people killed under Communist leader Joseph Stalin. “This terrible past must not be erased from our national memory and cannot be justified by anything,” Putin said at the ceremony. Critics say Putin represses political opponents, though the Russian leader remains highly popular in the country. 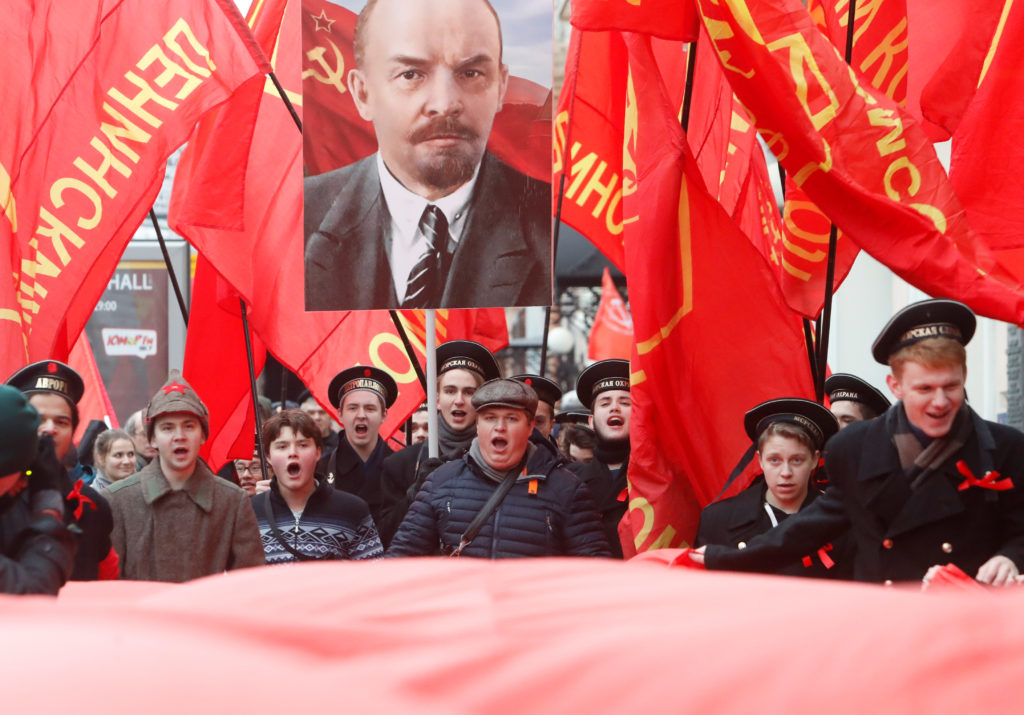 Russian historian Irina Shcherbakova told Deutsche Welle that Russians walk past reminders of the revolution every day in memorials and street names. The body of Soviet leader Vladimir Lenin still lies on display in a mausoleum in Moscow’s Red Square. These days, however, “Nobody wants revolutions and uprisings instead of order and peace,” she said.

On Tuesday, the Communist Party organized a parade and rally in Moscow, as seen in this video posted by Max Seddon, Moscow correspondent with the Financial Times:

Stalin signs out in force for the Russian Revolution 100th anniversary march in Moscow pic.twitter.com/dCnfMhlqeD

Some of the Spanish communists are flying the Catalan flag at the 100th anniversary of the revolution in Moscow. Also Stalin pic.twitter.com/iayDPBHnUK

Another flag displayed the design of the eastern Ukraine separatist Donetsk People’s Republic:

Front & centre at the 100th anniversary of Russian revolution in Moscow is the flag of eastern Ukraine separatist Donetsk People's Republic pic.twitter.com/UQli3lozmU

Some youth chanted, “Russia without Putin” and “Today with a poster, tomorrow with an assault rifle”:

Komsomol youth were just chanting "Russia without Putin!" at 100th anniversary. Also "Today with a poster, tomorrow with an assault rifle!" pic.twitter.com/IR9zwZeXYQ

“The red banner will be raised above Russia again!” said Gennady Zyuganov, leader of the Communist Party of the Russian Federation, at the rally:

"The red banner will be raised above Russia again!" MP Zyuganov tells 100th anniversary crowd near the Kremlin. Next up is Cuban delegation pic.twitter.com/QiB7E7A1vO

View more photos of the day: 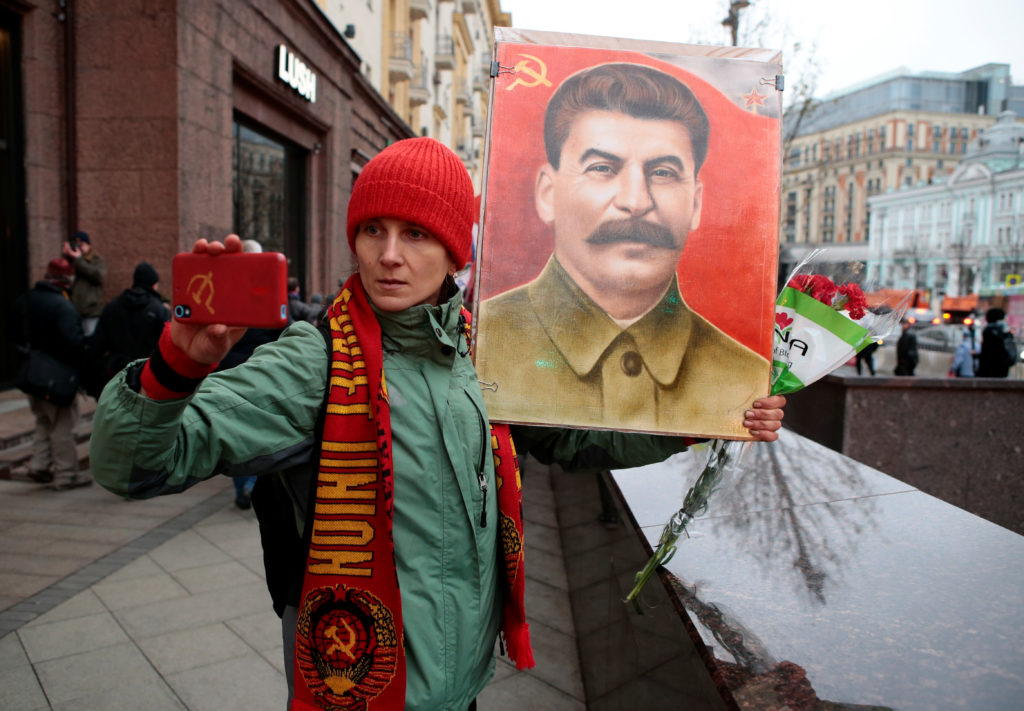 A demonstrator takes a selfie with a portrait of Soviet dictator Josef Stalin. Photo by Andrey Volkov/Reuters 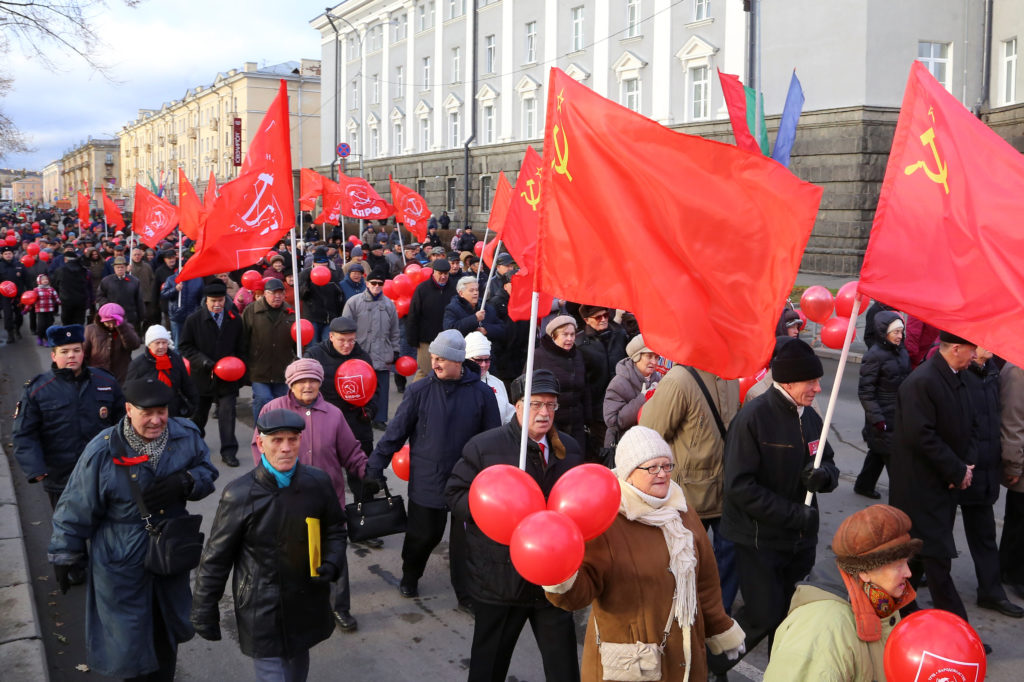 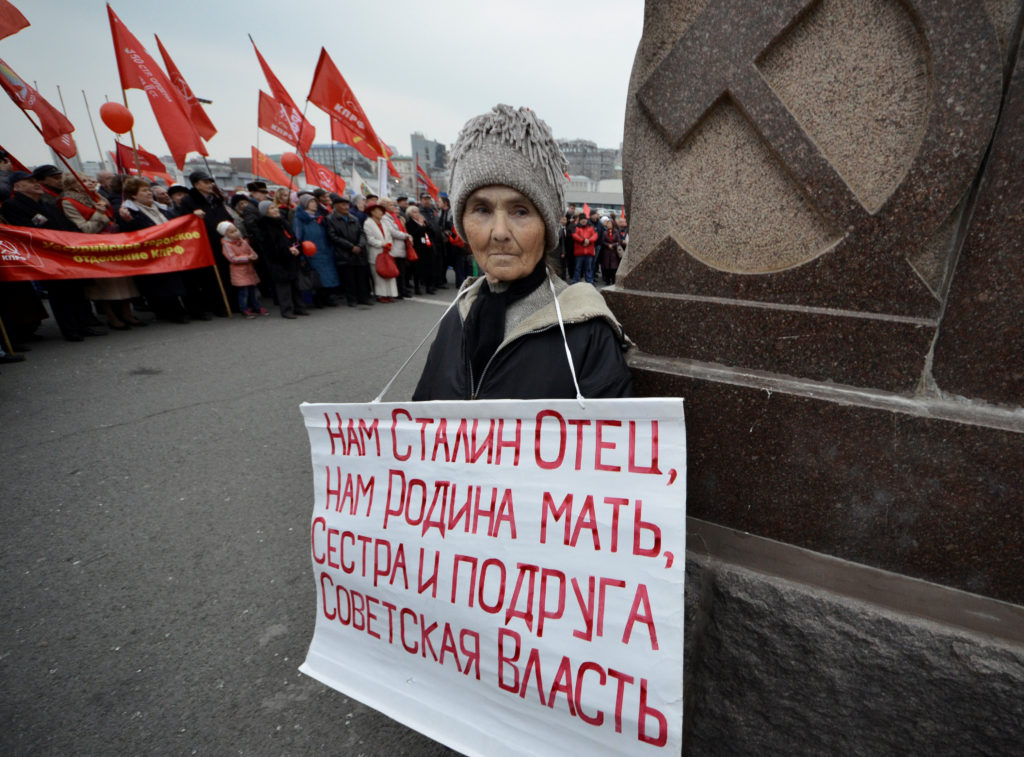 A woman in the far eastern city of Vladivostok, Russia, holds a sign that reads: “Stalin is our father, homeland is our mother, Soviet power is our sister and our friend.” Photo by Yuri Maltsev/Reuters 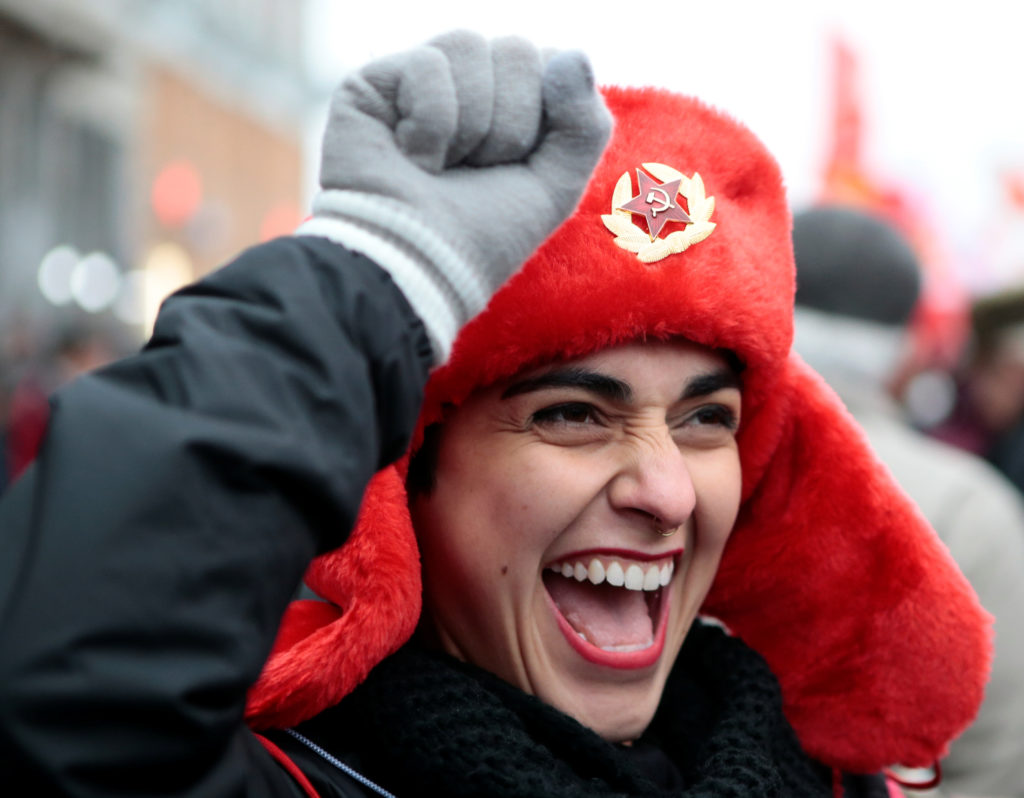 Russia used the Julian calendar until 1918, thus the Bolshevik uprising also was known as the October Revolution. Photo by Andrey Volkov/Reuters

Left: Russians attend a rally marking the centennial of the Bolshevik Revolution in central Moscow on Nov. 7. Photo by Sergei Karpukhin/Reuters